Heavy Metals Getting into our Baby Food - Moms Across America 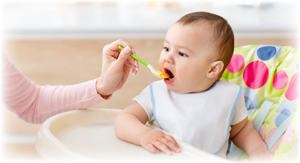 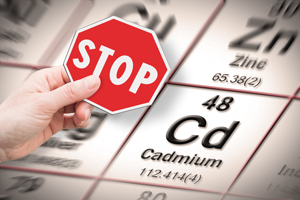 A new report released on February 4, 2021, by the Subcommittee on Economic and Consumer Policy Committee on Oversight and Reform U.S. House of Representatives reveals shocking levels of heavy metals in baby food ingredients. This report was sparked by testing initiated by Healthy Babies Bright Future in August of 2020. As stated in the new report, one of the baby food companies had a secret meeting with Trump’s administration and revealed the high levels of heavy metal contamination. The Trump administration took no further action.

Non-responding companies only submitted test results on the ingredients, not the baby food final product. One company merely reported an estimate of what they surmised the final product would contain. All of the companies had their standards for what levels of heavy metals would be acceptable. All of the companies that responded showed levels above FDA allowances for heavy metal consumption in water. Many had test results showing heavy metal levels that exceeded their standards. And yet, they approved all of the products for sale anyway.

The levels of heavy metals found in the ingredients were highly alarming. For instance, Beechnut baby food reported 913 ppb of arsenic in Amylase (an enzyme usually derived from yeast, fungi, or bacteria). This amount is 91X higher than the FDA’s allowable love of 10 ppb of arsenic in water.

Urine levels greater than 35 to 50 μg/L are consistent with acute arsenic toxicity. Some symptoms of arsenic poisoning are:

These are symptoms that parents often see in their children but may assume are normal or attributed to other causes.

Beechnut baby foods also reported 886.9 ppb of lead and 334.5 ppb of Cadmium in their cinnamon ingredient. The FDA only allows five ppb of both of these heavy metals in water. These levels are 177 and 69 times higher than the FDA’s standards, respectively.

Only one of the companies reported testing for Mercury at all, and that company, HappyBABY, reported 10ppb, which is a 500% increase than the EPA’s mercury limit in water, 2ppb. Healthy Babies Bright Future is requesting a mercury level of zero.

Symptoms of lead, cadmium, and mercury poisoning include:

Lead is associated with a range of bad health outcomes, including behavioral problems, decreased cognitive performance, delayed puberty, and reduced postnatal growth. According to the FDA, lead is hazardous to “infants” and “young children.”

Mercury poisoning in children results in:

The FDA has cautioned that infants and children are at the most significant risk of harm from toxic heavy metal exposure.

So why hasn’t the FDA set safety standards for limits of heavy metals, specifically in baby food? Moms Across America supports the healthy Baby Bright Future, Consumer Reports, and Congressional Oversight Committee endeavors to have the FDA do just this.

If reasonable safety standards are set to low levels or zero, one must wonder, with such a disparity between zero and 913 ppb, how will the manufacturers comply? They cannot simply switch to organic. Some organic ingredients in the report had higher levels of heavy metals than conventional ones, and most were above FDA standards. This is shocking to consumers who expect organic food, purchased at a premium price, safer and have lower levels of heavy metals and toxins.

How are these heavy metals getting into baby food?

According to the report, the ingredients with the highest levels of heavy metals were rice flour, organic and nonorganic cinnamon, organic cumin, organic coriander, oregano amylase, vitamin mixes, BAN 800, Sebamyl 100, and enzymes, all above 200 ppb or higher of arsenic, lead, and cadmium.

Therefore the primary contamination of baby food is being introduced through processed additives and spices. This information shows us that baby food can be made more safely without these ingredients. The primary food source, such as pears, potatoes, apricots, and prunes, had, for instance, less than 30 ppb (albeit still unacceptable) of lead. Steps must be taken immediately to eliminate all of the ingredients with high levels of heavy metals. Consequences must be rendered to the companies for not taking these steps before releasing contaminated food to the public. Besides, all baby food companies must comply with government requests for safety data. No matter how big of a company, no one should be immune from being responsible for their product safety!

So after determining the pathway of contamination, one cannot help but wonder...

WHY are these spices, rice products, and vitamin mixes or additives contaminated with heavy metals?

Soil experts such as Dr. Don Huber, a 50-year plant pathologist and Professor Emeritus of Perdue University, have stated that manure used as fertilizer in organic farming could be the reason for the higher levels of heavy metals. Conventional farmers can use straight nitrogen and potassium, and organic cannot. However, Confined Animal Feeding Operation (CAFO) manure can be used in organic, and excrement has been found to be a source of heavy metals. The manure contains heavy metals because the GMO animal feed they eat is grown and sprayed with pesticides and contains heavy metal residues. Pesticides such as glyphosate-based Roundup and Ranger Pro have been found to contain heavy metals. Hazardous waste from industries such as steel mills, tanners, film, and coal-fired plants is allowed into fertilizers.  Heavy metals have been shown to be taken up into plants.

The US Geological Survey reports that mining pollution draining into waterways is also a significant source of heavy metal contamination.

Senior Scientist of Consumer Reports, Michael Hansen, expressed concern over the lack of regulation in many countries that may have processing equipment for spices such as conveyor belts, metal bowls, or grinding equipment that contain heavy metals.

The reason for the contamination must be resolved. If forced to clean up their ingredient list, food manufacturers may have a challenging time producing baby food if cleaner sources cannot be found. Regardless of why, at Moms Across America, we are appalled that private companies, trusted by parents across the country, have continued to sell baby food that they knew was contaminated at extraordinarily high levels by heavy metals. We are also disgusted with Walmart, Sprout Organic Foods, and refuse to ignore Campbell for ignoring our government’s request and refusing to be transparent about the levels of heavy metals in their baby food.

Producing food that is given to a baby at their most vulnerable times is a huge responsibility. As Phillipe Grandjean, MD, Harvard adjunct professor,  states in the acclaimed book “Only One Chance,” developing blood-brain barriers are more susceptible to permeability by toxins. Also, because their liver is not fully developed, they absorb (and less efficient at eliminating) 40-70% more lead than adults. Exposure to heavy metals has statistically significant associations with lower IQ scores in children. And the effects are not able to be remediated in humans. The author points out that symptoms of heavy metal poisoning only worsen over time. Decreased mental abilities lead to incapacitated adults that need increasing amounts of care and medical attention. These children who are being inadvertently poisoned by heavy metals from well-intentioned parents will likely experience learning, behavioral or health effects for the rest of their lives. The contribution they make to society may likely be diminished due to a lower IQ. In short, these baby food companies, who are not taking responsibility for their products’ safety, are harming America’s future.

The heavy metal contamination of baby food (and all food) is unacceptable and must stop. The regulation of spices (likely grown in other countries) needs to be addressed. In the USA, crops grown in contaminated soil must be identified. It is possible to chelate the heavy metals out of the soil without severely disturbing the soil by growing hemp and composting said hemp. This process is called Phytoremediation.  Soil washing with chelating (removal) agents is also an option, but we prefer hemp. Imagine if the USDA funded farmers to grow hemp instead of millions of acres of GMO chemically farmed soy and corn? Imagine if the FDA lowered the allowances of heavy metals in our food to safe levels? Imagine if baby food manufacturers and all food manufacturers did not allow heavy metal contaminated ingredients in their food?

We, the consumers, implore baby food manufacturers and food manufacturers of all kinds to test your products for heavy metal contamination. Your diligence could mean the difference between our children having ten more IQ points that lead to a discovery or invention that changes the world. The integrity you have in producing 3-ounce servings of baby food or snacks could mean us getting our country’s future back.

We ask everyone to please contact their Senators and Representatives by clicking here. A pre-written email will ask them to urgently pass regulations to protect our babies from heavy metals. If you like, you can Tweet and  be automatically connected with your elected official's office as well.

Until the FDA and these food companies decide to act, and until clean baby food brands can be verified, we strongly urge all parents to make their baby food. As seen from the report, parents can easily avoid rice flour, Amylase, enzymes, BAN 800, Symbal 100, cinnamon, and spices. Breastfeeding for as long as possible and knowing your local farmer, and that they farm organically, with organically fed animals that provide the fertilizer, is also a meaningful way to avoid heavy metals. 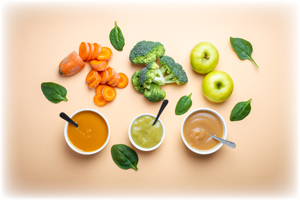 Here are a few simple steps for making your baby food:

Do know that you can make your own baby food! It’s not as hard as it sounds. You can also buy a portable baby food grinder and bring it with you to organic restaurants and grind up the food you eat. It works!

We wish to thank Jared Willams for his volunteer support in researching for this article. Jared is a recent graduate of Arizona University and is available for hire as a soil scientist. Please contact him at [email protected]