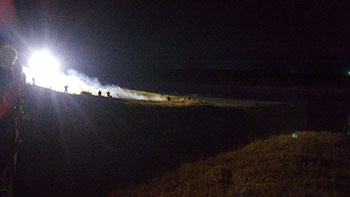 Moms Across America's director Zen Honeycutt, who has been at the camp for 4 days, reported that,"We were are asked to support the prayer on the bridge and did not expect to be a part of a massive onslaught of intentional police brutality by the Morton County Police. As I stood on the south side of the bridge, which was not considered trespassing, holding blankets for the Water Protectors who were getting soaked by tanks shooting water, several tear gas grenades exploded in front of me, burning my eyes, throat and causing me to go into convulsions. The grenades were also intentionally shot into grassy areas setting fire to the hills around me, provoking brave Native men to rush to the fires and extinguish them with their bodies. Objects that looked like large fireworks (or small bombs) exploded in the crowd. Rubber bullets caused elders, women and youth to collapse and scream for medics all around me. I saw women who were shot in the head and elders who were drenched with water in sub zero temperatures. Percussion grenades were going off and they were using the LRAD (Long Range Acoustic Device) to try and control the crowd.   Planes with Stingers circled overhead with their lights off, redirecting our cell phone signals and shutting down our Facebook Live video service.

It was nothing less than an intentional act of violence and warfare by the Morton County Police. It is a tragic time in our history, one that deserves the immediate attention and intervention of our President."

The legal team reported that 167 people were injured by the water cannons, 7 sent to the ER for wounds from the rubber bullets, many of which were head wounds, countless others injured from mace, tear gas, and one elder is still in critical condition from cardiac arrest. The incident was not sparked by a willful act of protest. In fact, the Morton County police had stated that they would clear the cars which block the road for emergency vehicles and the general public two weeks ago. When they did not, the Native American local men attempted to clear them for emergency vehicles. Youth and women prayed with them that their work would be successful. When the spraying with water and rubber bullets began, a call for support went out to the nearby Oceti Sakowin Camp and over 1000 supporters stood in prayer and supported their efforts for over 12 hours, from around  5 pm until well past 5 in the morning.

The coordination, generosity and willingness of the supporters was awe inspiring. Women carried huge logs for a bonfire built on the bank of the Missouri River to keep warm. Men shoved logs across the river like a giant game of shuffleboard to get logs to the fire. Supporters brought tarps to protect the young adults who were being violently sprayed with a firehouse as they formed a human wall with their bodies to protect their fire. Non natives and natives alike brought coats, hand warmers, ponchos, soup and fry bread to sustain the supporters throughout the night. A camp fire was built on the south side of the bridge to warm the people who were soaking wet in the sub zero temperatures to prevent hypothermia. 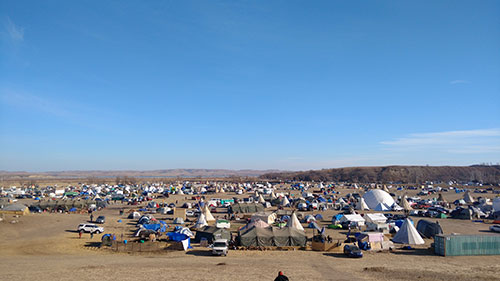 Many of the youth simply changed out of their wet clothes and went back to the front lines.

"What I witnessed were extraordinary acts of dedication and constraint by the water protectors. Over and over again, they were sprayed with freezing water and they continued to pray. They were shot with rubber bullets and yet they did not attack their attackers. They stood for 12 hours in the cold chanting to protect water, and did not retaliate with violence. Elders well into their eighties drummed past midnight to sustain the prayers. These young people, women and elders did this on behalf of 18 million people who stand to lose their primary drinking source if the Dakota Access Pipeline is installed under the Missouri River by permission of the Army Corps of Engineers. We call upon the Army Corps of Engineers to deny the permit for the drilling of this pipeline. We also request anyone who has bank accounts with Bank of America, Chase or Wells Fargo, to close your account and to tell them you are doing so because they have funded DAPL. The Norwegian Bank has pulled out and we expect these three banks to do so as well. It is not a matter of if the pipeline will break, but when, and we can no longer stand for or be a part of supporting the pollution of our planet.” 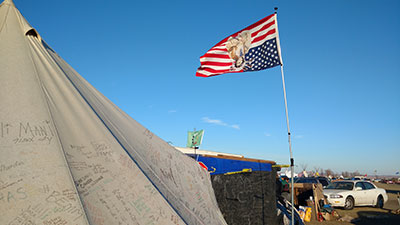 Moms Across America supporters is raising funds to Support Standing Rock. To find out how you can support go to www.momsacrossamerica.org and ACTION or www.ocetisakowincamp.org.