Once a year in Southern California, the masses of people, 70,000 approximately, converge upon the Anaheim Convention Center to buy and sell natural foods at the NPEW or Natural Products Expo West. I had the opportunity to report on the show as a host of the Weekly Women GMO Free News Show.

You have never seen so many Non GMO Project Verified and USDA Organic  seals in one place. You have never seen so many delightful, happy people talking about how their products are GMO free, organic and Gluten free! As a mother of children with multiple allergies, this is a thrilling development. Trying to find all three, GMO free, organic and Gluten free is like trying to find a needle in a hay stack even in a health food store even in one of the most affluent areas of America. Most products are either gluten free or organic, not both. Or they are Non GMO Project verified but not gluten free or organic.

Why is it so hard to find these foods?

Or more importantly why do we even need gluten free, non GMO and organic?

Is it just a trend or marketing ploy?

When I asked the food manufacturers, many of them said “Organic is the future.” I was surprised that they did not elaborate, talk about pesticides, glyphosate or GMOs. Some like “Good Boy Organics” are fully aware and are actively supporting the grassroots movements. They even go a step further and have BioDynamic pasta sauce! Check it out!

But many others, I suspect, do not know why the trifecta: non GMO,organic and gluten free is so crucial to moms.

1 out of 2 American children now has some form of chronic illness such as asthma, allergies, auto immune disorders, autism, diabetes or obesity. If you do the math, based on past diagnosis, 1 out if 2 children will have autism in the next 20 years. This is a crisis. This is urgent. Moms across America are struggling daily with health and behavioral issues and we want solutions.

Many of us now believe we know those solutions, and the winning food trifecta is a key role.

In addition to the over 1300 studies showing GMO harm, found on www.GMOfreeUSA.com, the recent evidence from the *Samsel and Seneff paper shows a very strong correlation between glyphosate, the active chemical ingredient in RoundUp and these skyrocketing children’s health issues, (the most widely used pesticide/herbicide in the world) especially autism. Most GMOs are genetically engineered to withstand Roundup, are sprayed repeatedly during growing and these chemical does not wash off. A new Soybean paper showed GMO soy with drastically higher levels of glyphosate, proving it does not evaporate in the sun either. Soil testing has shown glyphosate to still be active a year after use.

Glyphosate has been show to destroy gut bacteria at .10 (one tenth) of a part per million in chickens.

The gut bacteria are the stronghold of 70% of our immune system. If you destroy the gut bacteria, which is likely what is happening when you eat the America diet which is 85% GMO and contaminated with glyphosate, your body’s gut bacteria can no longer produce Tryptophan*.

Without Tryptophan your body cannot produce Seratonin or Melatonin*. Seratonin makes it possible for the body to regulate insulin, so without healthy gut bacteria we are more likely to develop diabetes.  We know that diabetes has increased so much in America that in 13 years we will have no money left in the federal budget for anything except diabetes.

Melatonin influences sleep, happiness, satiation when eating, impulse control, bi-polar behavior and even acts of violence. Obesity now impacts 40% of Americans, our kids are three times more likely to be drugged for mental illness than kids in other countries, and on average, there has been a school shooting in America every other day this year.  Violence and mental illness is beyond control. Something is impacting the health of America. The USA is the  #1 country in the world in expenditures for health and last on the list  of the top 17 most developed country in actual health results.

Non organic is not just a more affordable chice, there is a cost: glyphosate is allowed to be sprayed on the soil before planting non organic crops and directly on many staple crops at harvest as a drying agent. They spray it directly on the non organic food crops we eat! We have recetly learned that the EPA has allowable levels of glyphosate on over 160 foods at hundreds of times higher than has been destroy gut bacteria. See the full list here.Sweet potatoes glyphosatelevels are 3ppm, Potatoes, 5ppm, tea 7ppm, corn 13ppm, and our live stock eats grains at 400 ppm. Glyphosate collects in the tissue of meat, making organic meat a very important choice.

People with gluten sensitivity report irritability when they consume gluten/wheat. Huge numbers of children with autism have shown dramatically better behavior when gluten is removed from their diets. Many are also reporting autism symptoms dissapear when they eat completely organic. Moms Across America has over a hundred testimonials, many of them about autism.

Glyphosate is sprayed on wheat as a drying agent. Wheat is one of the number one foods of the American diet, in cereals, sandwich breads, pasta, commonly eaten at every meal. Gluten intolerance and Celiac’s disease now affects 18 million Americans. Reports by Samsel and Seneffs show that is most likely not just the highly refined processing of wheat/gluten, that is impacting health, but the glyphosate. This is why the trifecta of Non GMO,organic and gluten free is so important, and why the companies who choose to make these foods, that are ALL THREE, despite the difficulties, are not a trend or duping me with a marketing ploy. They are the winners.

The additional good news, is that in the process, you avoid other toxic chemicals of which we still do not know the effects. Non organic apples are sprayed with 21 different pesticides, strawberries 184, and coffee has tested positive for hundreds of toxic chemicals, more thanany other crop.

So when I find a food company that is Non GMO, organic gluten free and excuse me if I am chirpy, super excited and highlighting them like they are heros of the universe. Because considering that my children are my universe, they are.

Here is OH Yes! Pizza that is Gluten Free and Organic (and therefore GMO Free).

Here are some great finds at the NPEW: 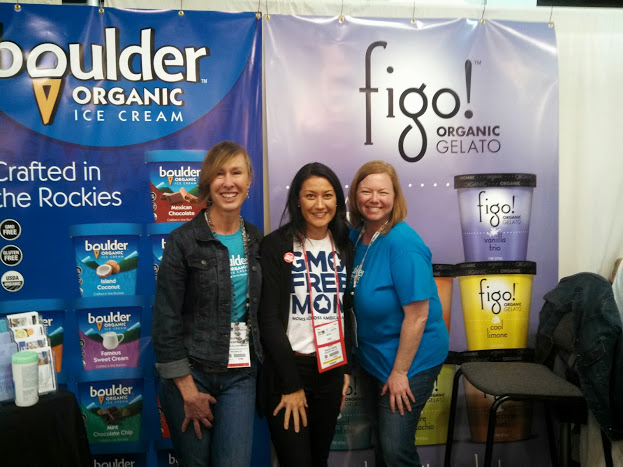 Next blog will be about the other heros of food, the makers of probiotics, raw organic fermented veges, kombucha and keifer.  We CAN heal our guts and heal from multiple allergies.  Find our more about cultured foods in our next blog.