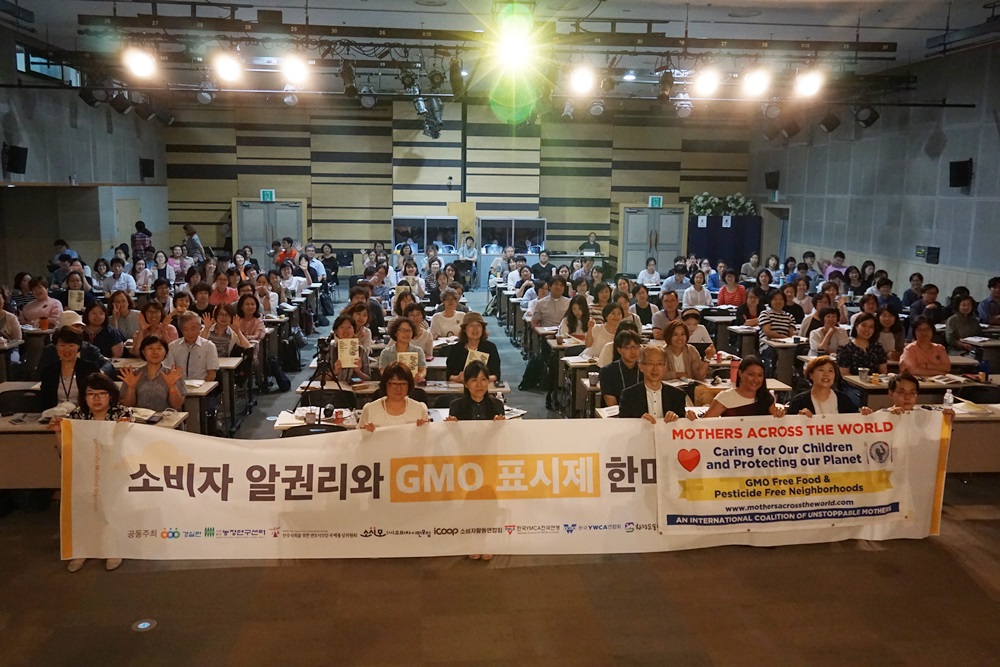 Ah Young Kim, Chairperson of iCOOP Consumer Activities said “Currently, Korea’s labeling system allows an exemption on too many products, but the consumer should know precisely whether GMOs are included or not in their food. By sharing the experiences and opinions of the speakers and audience, this symposium can contribute to increasing consumers' awareness on GMOs and improving current GMO labeling system. ”

Challenges with Both Non-GMO and GMO Labeling

Speakers at the conference pointed out that labeling is essential to address traceability and accountability for contamination and health issues such as allergic reactions. They also addressed the complex and unsuitable standards for labeling GMOs and non-GMO products. For instance, in Japan the laws require for there to be 0% contamination in any food product of GMOs, therefore, due to drift and widespread contamination, it is very difficult to label anything non-GMO. This reduces consumer awareness about GMOs and confuses the consumers regarding price differences between local non-GMO products (which often cannot be labeled non-GMO) and cheap GMO imports. Leaders at the conference call for a 1% allowability of GMOs in non-GMO product, like Europe, and similar to the USA standards of 0.9%. In Japan, GMOs are not labeled, but consumer groups are working to address the issue with their political leaders, and they expect a decision this year. Comparatively, in Europe, GMOs are labeled based on an origin-based system and non-GMO labeling is permitted with an allowance of anywhere from 1-5% contamination level depending on the country. 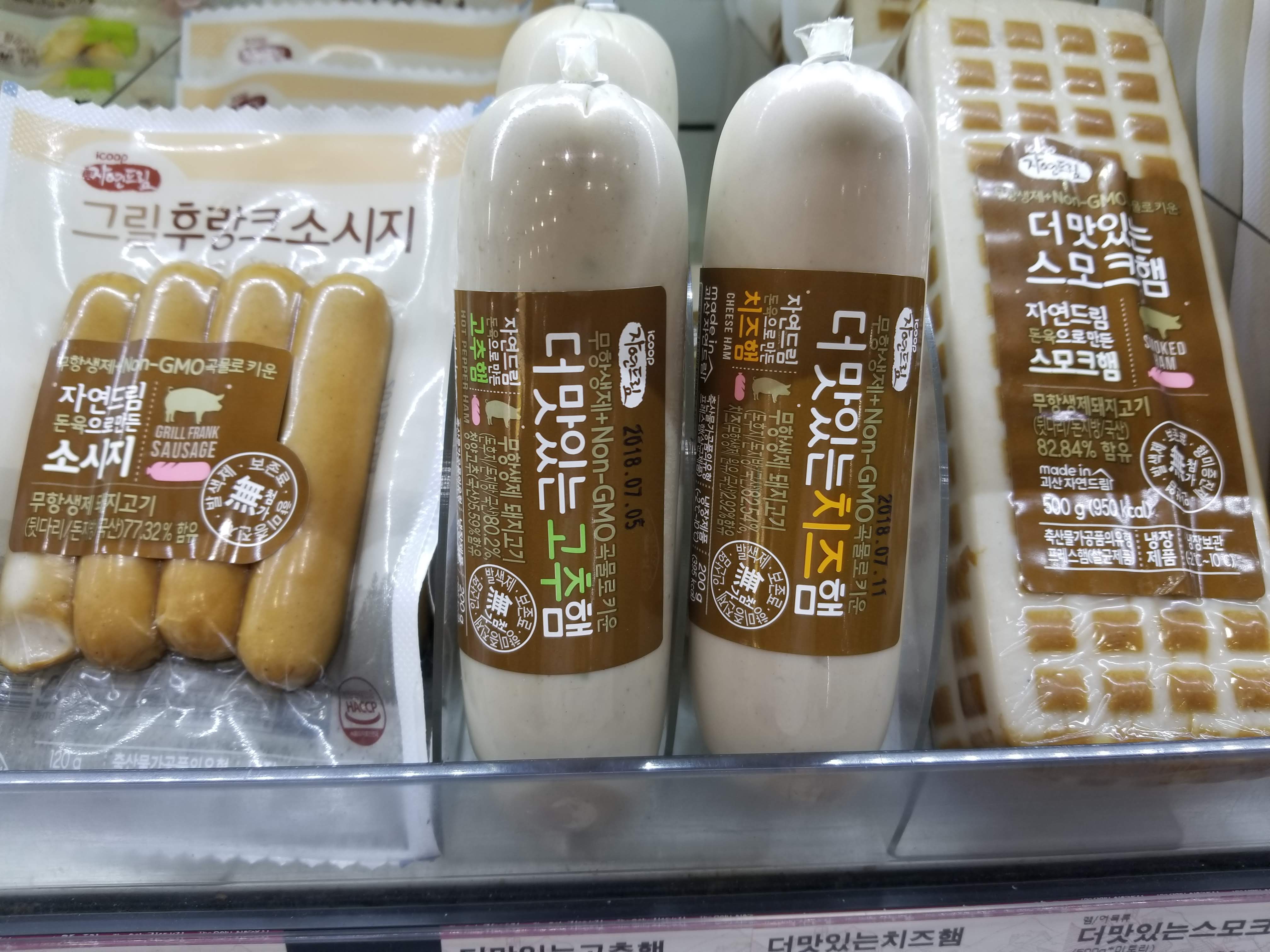 In Korea, non-GMO labeling has an allowable level of contamination of 3%, which is between Japan and EU. However, much like the USA, the current GMO labeling law does not include labeling all GMOs. The current system is a detection-based system--meaning GMO proteins must be detectable in order to label it as GMO--and yet products derived from GMOs, which have such highly processed ingredients that GMOs are not detectable, are not labeled GMO. Koreans are calling for an origin-based system where if the product contains GMO ingredients, whether they are detectable or not, it is labeled as a GMO.

When asked about the practice of not labeling GMOs ingredients such as oils and soy sauce, which are derived from GMOs, I stated, “Ask any parent of a child with a peanut allergy. They would never risk feeding their child something derived from peanuts. Genetic modifications are performed at the molecular level of DNA, which is not what the detection-based system is testing for; that system tests for whole GMO proteins. Even trace amounts of genetically modified DNA could be harmful to a susceptible child. Parents deserve to know if their child’s food is derived from GMOs in order to be able to trace possible reactions and protect their child’s health.”

According to Dr. Michael Antoniou and team's work, specifically, their paper showing the non-substantial equivalence of NK603 GMO corn vs non-GMO, things can go very wrong due to a GMO's innate mutagenic properties. If you just focus on the GMO protein you will miss a whole lot of other changes that arise from the mutagenic effect of the GM transformation process.

Numerous scientific studies now show that genetically modified food has health risks. Clearly, these foods should be removed from our food supply. In the meantime, they should at least be clearly labeled to prevent further health care issues and higher costs. 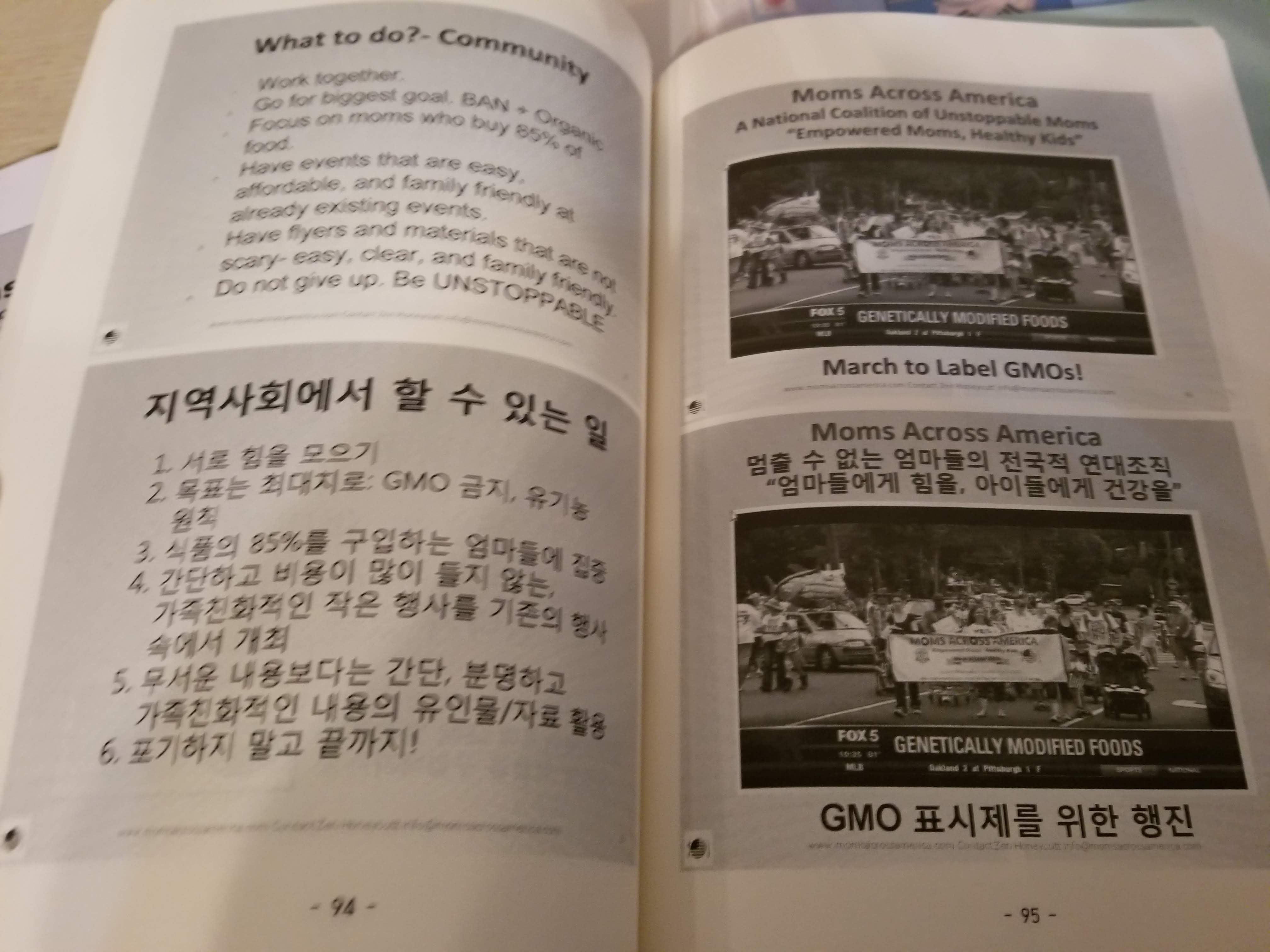 I was happy to share the successes of American activism, raising awareness through GMO labeling initiatives, joining into parades and mainstream events, and hosting events such as movie nights. My presentation and the presentations of the Japanese and Korean speakers were all carefully translated and compiled into a book for each of the 200+ attendees.

What I Learned From the Visit To South Korea

In South Korea, I was impressed by the commitment of the leaders to bring the truth to the public. With skyrocketing rates of autism, cancer, allergies, pervasive developmental delays and low birth rates, many advocates are highly motivated to translate the scientific studies into Korean, write books, speak, and hold events such as this conference. I spoke with a health practitioner, Ji Hoon Kim, who treats children with autism and he said he prescribes an organic diet, and sees improvements, just as we do in the USA. He pointed out that he has identified through his patients that the firstborn is the most likely to have autism. He believes this is because the firstborn absorbs the bulk of the toxins the mother has been exposed to, in the womb. He stressed the importance of women, especially before they attempt to conceive, taking care to have a clean, organic diet and reduce their exposure to toxins through body care products, pollutants, and cleaning products. 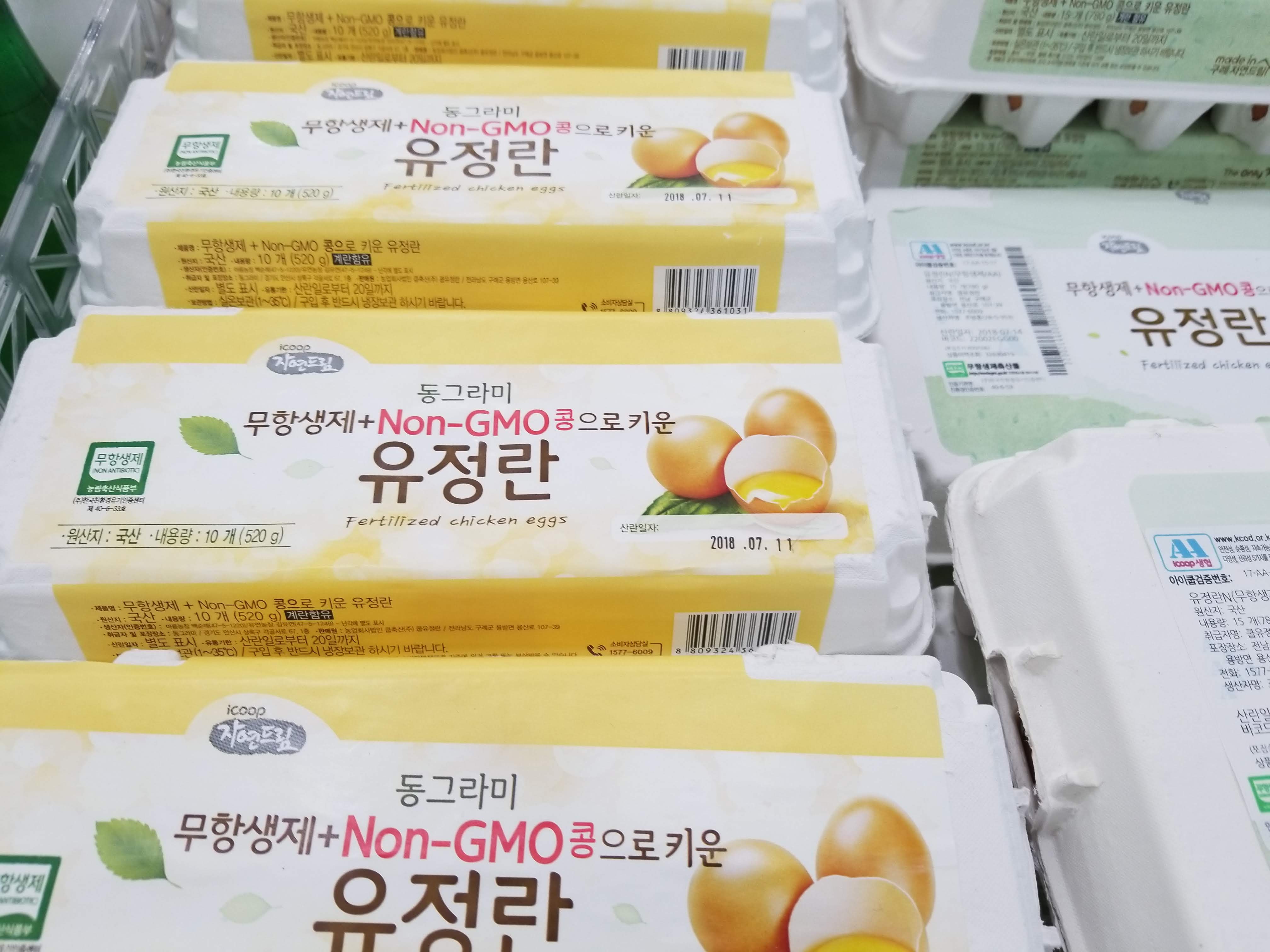 The food cooperative who hosted my visit, iCOOP, provides organic food to their 270,000 + members and understands the seriousness of offering food uncontaminated with chemicals, especially to those with cancer and other health issues. The company is known to remove any food, even thousands of one item, from the coop that might even possibly contain contamination rather than risk selling the item to their customers. This results in a loss for them but is important for the safety of the customers. iCOOP offers non-GMO meat, dairy, eggs, and many food items that are about the same price as conventional for iCoop members. The trust the Korean food cooperatives have created with their members is a huge contrast to the mistrust American consumers feel when shopping in big chain stores in the USA, where the origin of food, additives, processes, GMO content, and pesticide content are not labeled.

We have much to learn from the Koreans, including the benefit of eating fermented foods. Koreans eat fermented vegetables with every meal. The variety is delicious and very beneficial. The good bacteria helps to balance the gut, strengthen our immune system, and balance hormones which prevent obesity, mood disorders, insomnia, and mental illness. I couldn't help but wonder if the plethora of fermented foods and whole, fresh foods was what made the difference between the numbers of obese people in the USA (40%)  and in Korea, where most are slim and fit. Koreans also go to Korean bathhouses frequently, which I tried, and was amazed at the experience. For hours, bathers go in and out of saunas, which help to detox the body, mineral spas, which replenish minerals and soothe ailments, and nap on salt crystals, in charcoal rooms, high oxygen rooms, and jade stone rooms. It was a very rejuvenating experience and one I recommend. The high level of self-care in Korea is admirable. 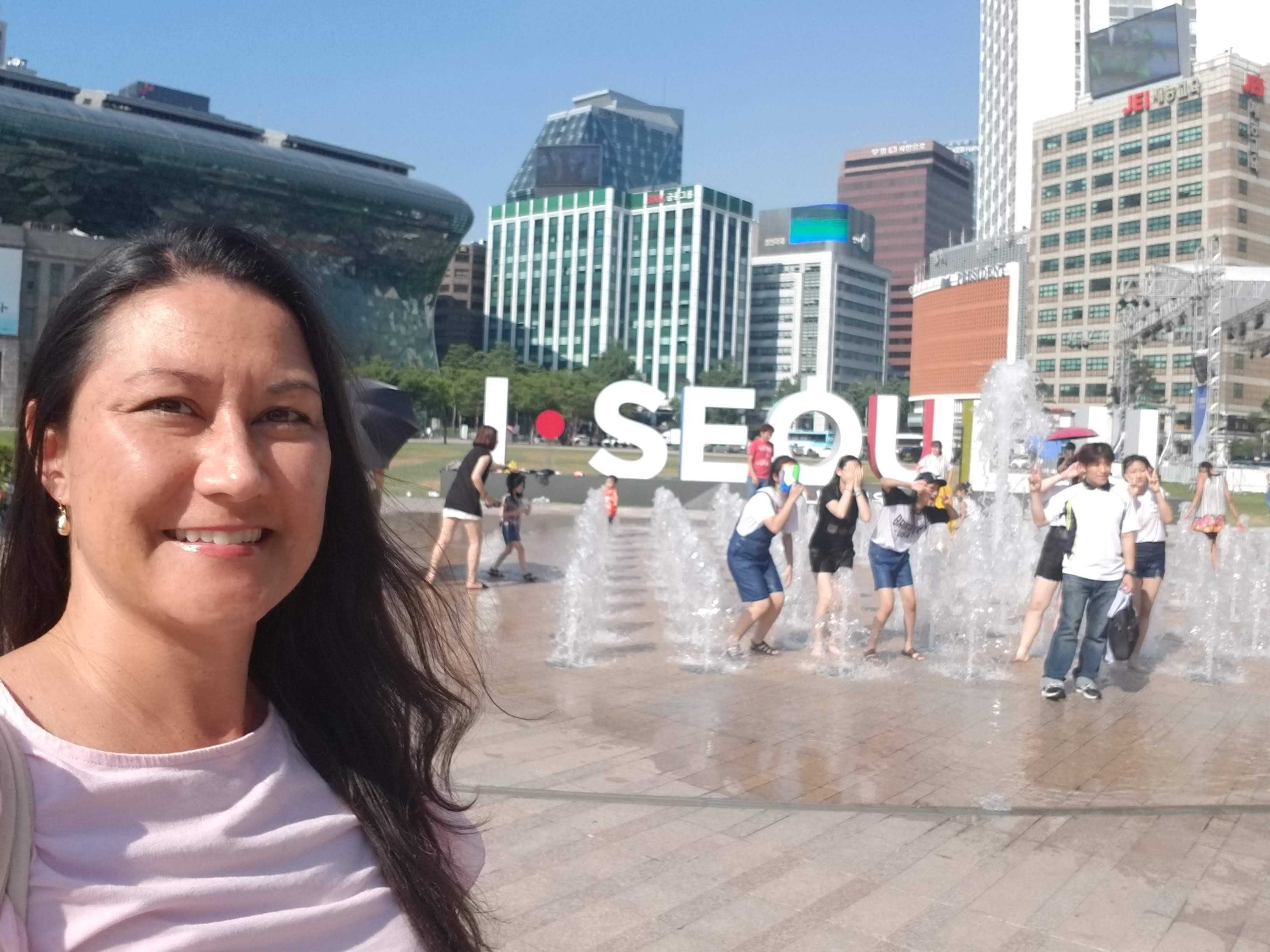 During the trip, I learned from a food and vaccine choice advocate named Orogee that Dr. Stephanie Seneff, an American scientist from MIT exposed a study from Nigeria that revealed that acetobacter, a bacteria, digests glyphosate. This bacteria is found in persimmon vinegar. It is also found in apple cider vinegar, kombucha, and sauerkraut. How amazing that I traveled all the way to South Korea to find a solution to removing glyphosate from our bodies, easily, with ingredients that I have in my kitchen at home!

My gratitude goes out to all the sponsors of the event and especially to the iCOOP directors, staff, and members for their hospitality and commitment to health.

Links to news coverage in Korea