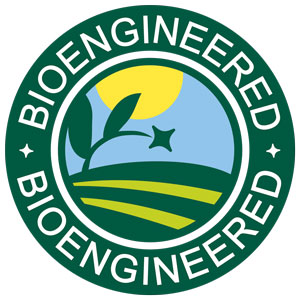 The above three options are not required for products derived from GMOs, such as soy or canola but have been so highly processed that the GMO fragments, while present, do not read as detectable by the chosen testing methods.

If food manufacturers use the symbol, it is simply not enough. This symbol is misleading for three reasons:

First, consumers do not know genetic engineering and genetic modification as "Bioengineered." The companies who make GMOs, the regulators who are supposed to regulate them for safety, the food manufacturers who buy them, and the retailers and media that promote them have not used this word to describe genetic engineering before this point in time. Therefore the use of this word is misleading and, frankly, trickery.

Second, the words "Biologique" and "Bio" in Europe are used for organic food labeling. The GMO industry is co-opting the term "Bio" to mislead the public into thinking the products are connected to biological practices that are healthy, such as organic food.

Third, the Bioengineered symbol shows a happy green garden, not a scientific laboratory where genetic modification occurs. These genetically engineered products have patents because they are "unique" and use proprietary technology. This technology is created in a laboratory and does not happen naturally in a garden. The word biology refers to a region or environment's plant and animal life. These GMOs are genetically engineered in a lab thousands of miles away from the majority of where they end up on the store shelf and have nothing to do with that region or environment.

Simply stated, if these foods were accurately labeled, they would say "Lab Engineered," not Bioengineered. 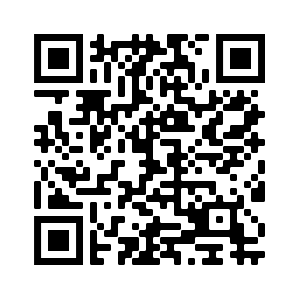 Instead, they are labeled with a misleading symbol. Or they may have a QR code. The QR code, which many companies already have, is discriminatory because many people do not have a Smartphone and/or do not or cannot use it in that capacity. I have nearly pulled my hair out, trying to get my 82-year-old mother to forward an email I sent to her doctor because she doesn't know how to use her email. The likelihood of her ever using her Smartphone, if she remembered to bring it with her to the grocery store, to scan a QR code and look up the information whether it is GMO is less than zero. And the GMO proponents are not dumb. They know this. The population of people who cannot afford a Smartphone or cannot use one is therefore at a disadvantage if food manufacturers choose the QR code option to comply with this so-called law. 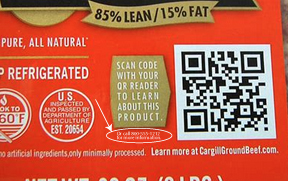 Or, if the food manufacturer chooses to have a telephone number on their package to provide customers with information on their ingredients, one must again be assuming that the customer owns a cell phone and has the luxury of taking the time to make that phone call, wait on hold and make the inquiry about every item they purchase. Over 40% of mothers in America are single mothers, dealing with jobs, toddlers, shopping, and healthcare are overwhelming. The likelihood of an exhausted single mother stopping to make a phone call with a toddler on her hip and a baby in the shopping cart who is trying to stand up in the cart is not only not wise or safe; it is improbable. Again, the GMO proponents who lobbied our elected officials are not dumb. They know this. And they don't want us to know that GMOs are in the food, so this "let the consumer call the manufacturer" option works out very well for them 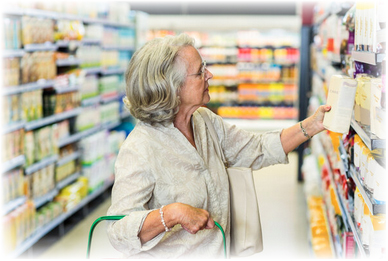 For these reasons, Moms Across America continues to raise awareness about GMOs in our food. Our government, the food manufacturers, and the media are not doing this, so we must. It's also in our nature to research, share information, and take action to protect our families. We will continue.

In the meantime, we are grateful that the Center for Food Safety, which represents a coalition of grocers and retailers, filed a lawsuit in federal court in 2020 and continues to press the government to require accurate and equitable food labeling.

“These regulations are not about informing the public but rather designed to allow corporations to hide their use of genetically engineered ingredients from their customers,” Andrew Kimbrell, executive director of the Center for Food Safety, said. “It is a regulatory scam which we are seeking to rescind in federal court.

The Center for Food Safety is also challenging the “USDA’s unprecedented allowance of electronic or digital disclosure on the packaging, also known as ‘QR code’ or ‘smartphone’ labeling, without requiring additional on-package labeling.”

“…we are urging our million CFS members and others to become citizen investigators and find and expose the companies that are using QR codes instead of on-package text or symbol labeling, thereby trying to keep us in the dark about what they have put in our food,” Kimbrell said.

We will keep you posted on the progress of this lawsuit and the status of GMOs in our food supply, new CRISPR GMOs, gene editing, gene drives, pesticides, and more.

We cannot encourage you enough to buy organic food, begin or continue to grow your food, and support your local organic farmers.