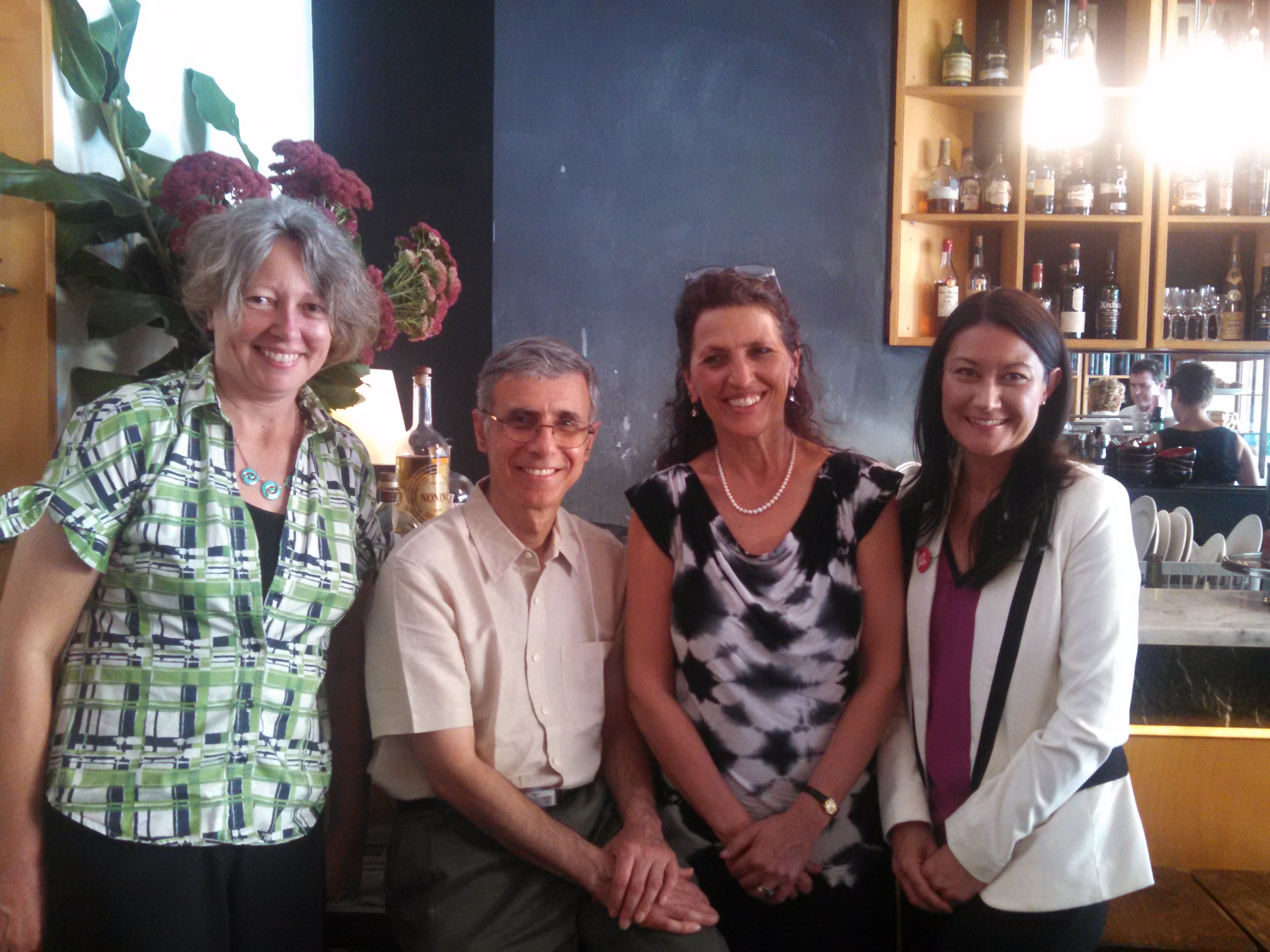 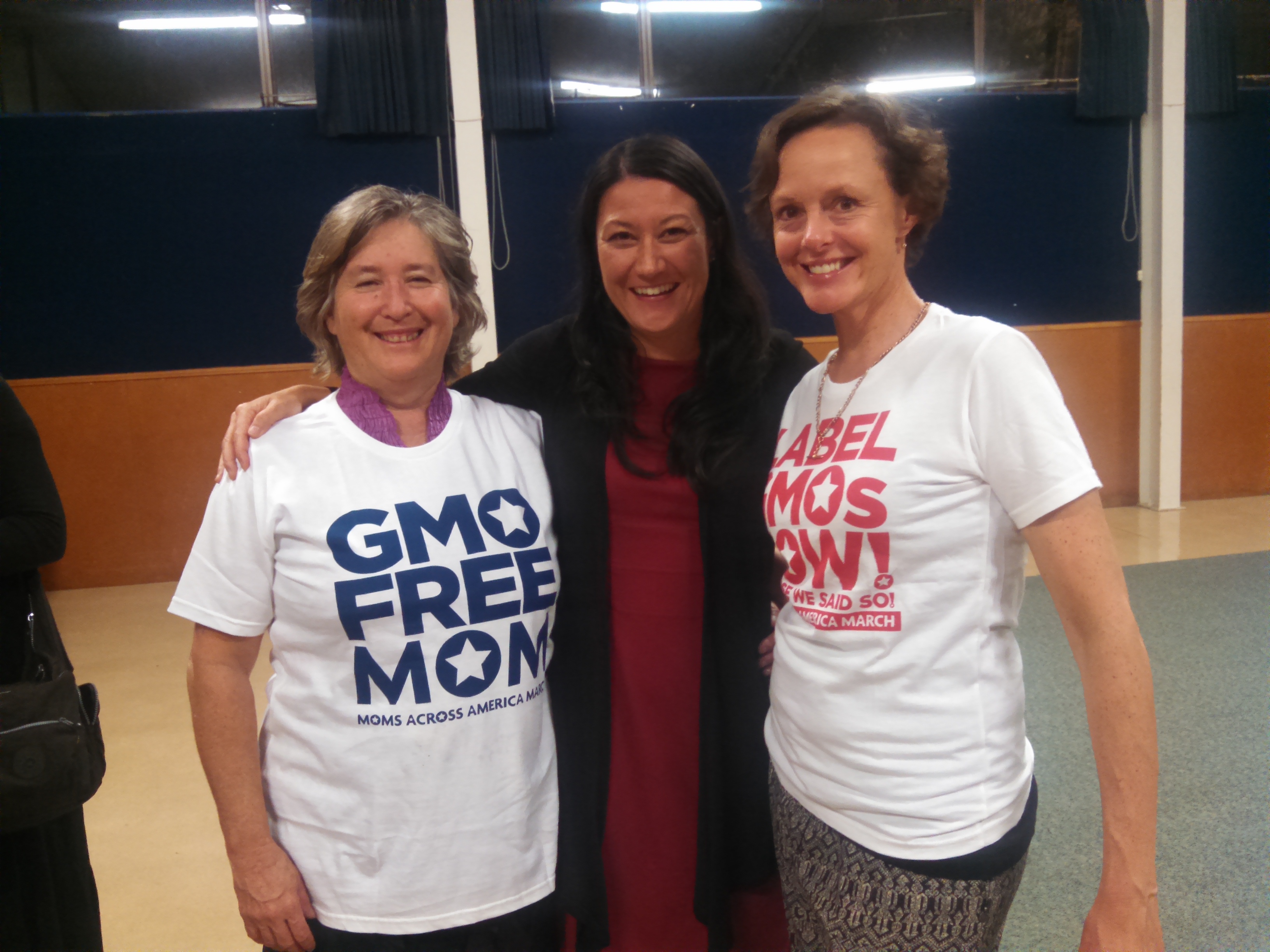 The concept of moms uniting across the world to speak up for GMO Free and pesticide free food is expanding.  Globally, moms buy 85% of the food. We are the primary caregivers trying to provide a healthy environment for our families, and many of us are managing sick children. We have an opportunity to speak up and have a significant impact together, very efficiently.

​Although our intention was to focus nationally on the USA, right before our initial Independence Day parade in 2013, ​Moms Across America was delighted to hear from a Mom who wanted to start Moms Across Canada. Shortly after Moms Across Africa rose up, then Moms Across Ireland.  We were on a radio spot in Jamaica and connected with supporters in the UK, Australia, Belgium, Belize and Europe. In July of 2014 I was honored to be asked to speak at an International GMO Conference in Beijing, China called the “International Food Safety Conference” along with 30 other experts from 15 countries.  China was being told, they said, that “American mothers have been feeding their children GMOs for nearly 20 years with no ill health effects.”

In my opinion, they were being lied to for economic gain. I realized this was global play for power, much bigger than a USA issue alone.The mother in me was compelled to speak the truth no matter where I was asked to speak.  So I went to China and connected with mothers and women from Argentina, Russia, China, New Zealand and supporters from Taiwan, France, Denmark, Germany, India and more. As every speaker talked about their area of focus, I was amazed by the depth and expanse of harm GMOs and related pesticides were having on all life forms.  Any doubts I had completely dissipated. The scientific accounts of harm; liver and kidney damage, tumors, sex hormone changes, mineral chelation and deformities, loss of crop yield, increased pest resistance, decreased soil quality, increase of pollution and toxicity, loss of jobs to local communities, infertility, sterility and accounts of miscarriage... all had me convinced that the path we are on is true and right.

​As a mother, I wanted every mom in the world to feel this sure, to be as emboldened and clear about protecting our children from GMOs and toxic pesticides as I was, because it is not enough for just our own children to eat organic. Our children's future spouses are out there somewhere, and we want them to be able to have healthy happy families someday. When I spoke, I was firm, clear and shared from my heart. I gave testimonials from our Moms in the USA that have seen their children get better by avoiding GMOs and pesticides and eating organic. I shared about our glyphosate test results, which found glyphosate in breast milk at levels 3000X higher than has been shown to cause harm in animal studies. I shared about the collateral damage of our children as a result of the big chemical companies’ war on pests and weeds. I spoke about my experience of going to the Native America museum, where I saw a placard under a feathered chieftain headdress that read “To this day, the leaders of the Native American Tribal Council are elected by the mothers of the tribe. The mothers continue to hold the power to remove a leader based on lack of performance."

I asked the crowd, “Why is this? This is because the community trusts that a mother’s commitment is in alignment with their best interest. Universally.”

Afterwards, Chinese mothers surrounded me and said “On behalf of one billion Chinese people, our mothers thank you and your American mothers.”

After the conference, I was thrilled to have, Vandana Shiva, global leader for seed freedom of Navdanya sit next to me on the bus ride to see the Great Wall of China. We talked about mothers and we hatched a plan: A Moms Across the World coalition, and a two week campaign between Mother Earth Day April 22,  (the UN has officially renamed Earth Day to Mother Earth Day) and Mother’s Day  May 10, where mothers will speak up and unite to care for our children and protect the planet. The Moms Across the World website is now taking shape and our Moms Meetup event on May 2 has over 200+ hosts signed up on Facebook. Mothers are taking a stand for healthy communities. 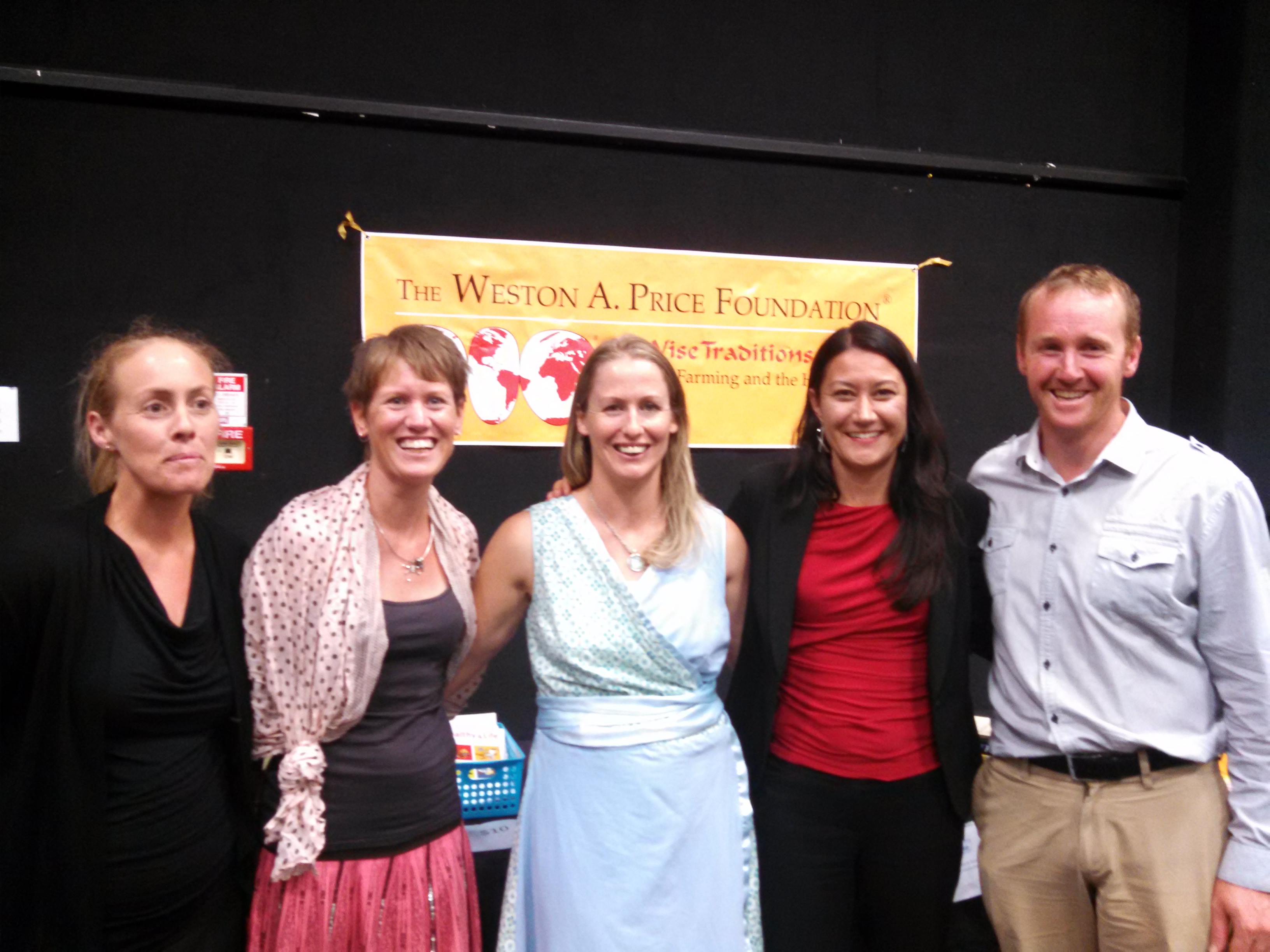 Global health org. Weston A. Price Foundation hosted a talk in New Zealand and has partnered with us for Moms Meetups.

March of 2015, I went on a speaking tour in Australia and New Zealand, with gene scientist and micro biologist Dr. Michal Antoniou and pediatrician Dr. Michelle Perro, sponsored by MADGE ( Mothers are demystifying Genetic Engineering)  and GMO Free New Zealand.  I was thrilled that mothers would be connecting across the world.  Besides being ecstatic that I would be able to visit these beautiful countries, I was moved by our hosts' generosity, kindness and commitment to this global cause. I learned a great deal from Dr. Antoniou and Dr. Perro about the harmful impact of GMOs and glyphosate from their expert perspectives. ( More in another blog asap) Unfortunately both doctors both repeatedly, clinically and scientifically confirmed my findings in my own child and from testimonials from moms whose children whose health has been impacted.

I also learned something which astounded me. Despite New Zealand being GMO free crop-wise, their people are sick. When I asked them to raise their hands if they had a loved one in their family who had allergies, autism, asthma, auto immune issues, diabetes, obesity or cancer, virtually every hand went up once and nearly all their hands went up 2-3 times. I literally gasped from the percentage of hands that went up. I went to Australia and New Zealand to share the devastation that is happening to American’s health, but what I learned was just as alarming. 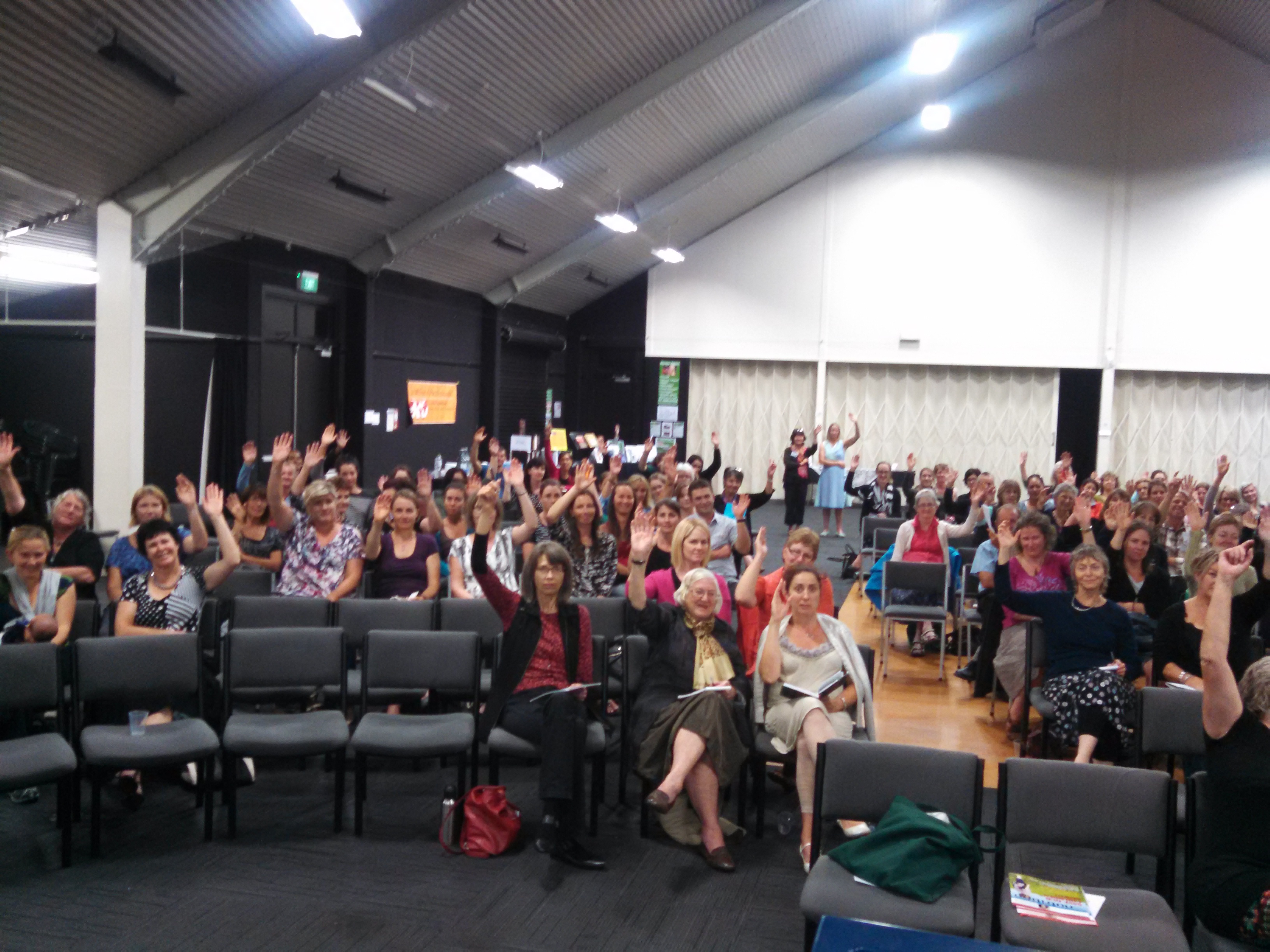 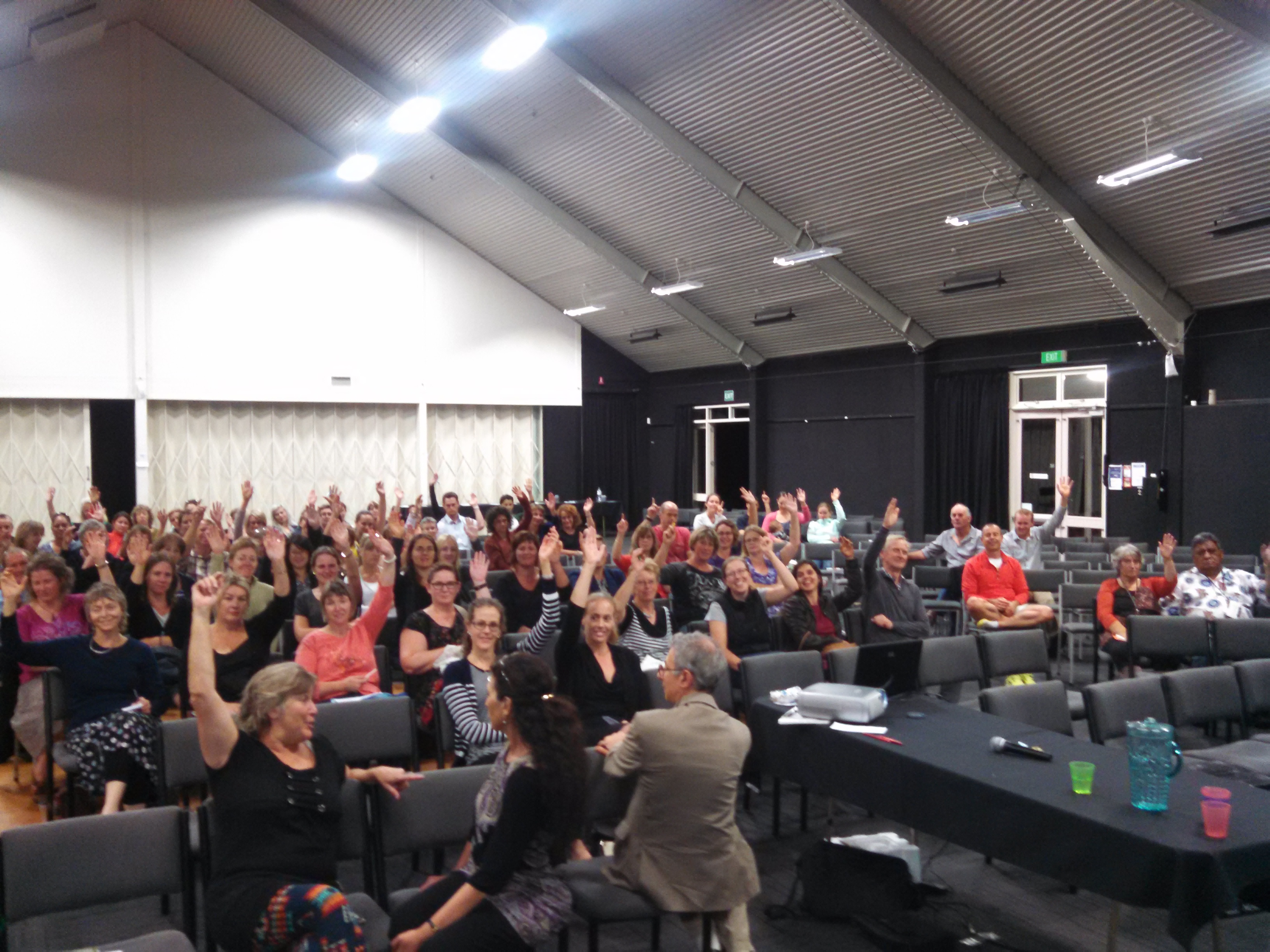 I learned that, despite stricter restrictions on growing GMOs, GMOs and pesticides are being consumed by Australians and New Zealanders through the imported ingredients in their food and their health is just as much on the decline as ours. In addition, an Australian university came out with a report the same week that I was there, showing that glyphosate caused placental tissue cell death at levels which are allowed in Australian water: 1000ppb, even higher than what is allowed in the US. Over 2O0K each of GMO corn and soy, sprayed with pesticides are imported to feed the meat livestock. A scientific study from Monika Kruger in Germany shows glyphosate accumulation in animal tissue at 19-20 ppb. (see study uder DATA on our website)

As green and natural as New Zealand is, locals shared that (just as in the USA), their country uses herbicides freely and frequently, on roadsides, farms and in forests. I was devasted to learn that Roundup is sprayed on grass fields for “burn down”. New grass is planted in the Roundup sprayed soil and the cows and sheep eat that grass with glyphosate residues ( much lower residues than on GMO or conventional foods, but still likely to be present). This explains why the study from Germany by Monika Kruger showed people who ate organic food had "less" glyphosate in their urine, instead of none. Even grass fed meat is likely to have glyphosate residues. Very upsetting.

Aerial spraying is a consistent battle in NZ and mothers reporting that their children get sick after spraying, are ignored. When mothers came up to me and shared the extent of their children’s health issues, the autism, allergies, rashes, boils, chronic painful eczema…I felt heavy. I had hoped their health would be better, I had hoped we could warn them and prevent the health issues we have. At one school near Melbourne, Australia we saw a medical alert wall of children who were anaphylactic and figured out that they consisted of 14% of the school’s population.14% of the children could literally die from food. In New Zealand Dr.Perro learned that 1 out of 5 children have a peanut allergy, the most life threatening of food allergies. We have evidence to show now that the GMOs and related pesticides are the primary contributing factor to the increase of food allergies and other illnesses, but we are all struggling, globally, with having public officials hear us, take action and protect our children.

Even the politicians who speak up are ignored. One Green Party member in NZ attended the talks and spoke with me afterwards. He shared that if New Zealand reduced their dairy herds to half the size, but went all organic, the industry would make a higher profit from selling organic dairy products AND eliminate the need to depend on GMO feed imports. Their cattle could be sustained by local grass and feed. Why isn't this being implemented? Don't they want to be more profitable and use less toxic chemicals on their beautiful land?

Global news broke while we were in Australia, the World Health Organization of the UN declared glyphosate a class 2 "probable carcinogen". And yet the EPA has not revoked the license of glyphosate.

Across the world, mothers feel betrayed by our leaders. We feel unsafe. We feel angry and outraged. We see corruption and greed robbing our children of their fullest potential. We are gripped with terror when our child has an allergic reaction from eating a common food. We weep at night when we have no strength left to manage a violent, autistic child. We forever mourn the most devastating losses of miscarriage and infants. At what point will we mothers cease to allow these travesties? At what point will we bar the doors and lay our bodies down? Or shall we first stand up and speak out and say no more?

Across the world, mothers are sayng, "Not on our tables, not in our house, no GMOs and no toxins". 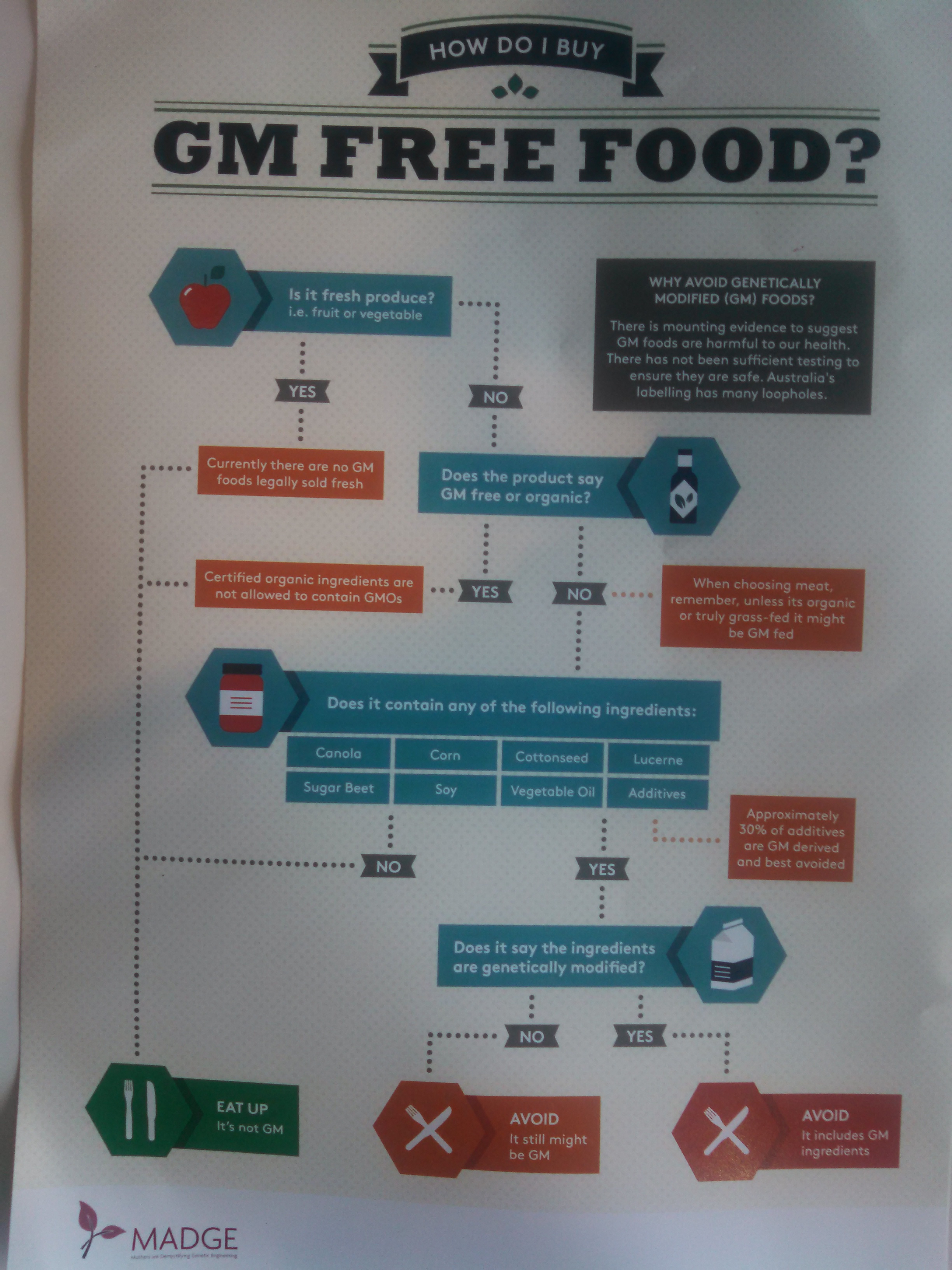 We ask you to join us May 2, host a gathering of Moms, a Moms Meetup, to share, support and inspire action for healthy communities. Sign up on www.momsacrossamerica.com under EVENTS and join us on an international conference call at 10:30 am PT with Vandana Shiva, Jeffrey Smith, Evangellos Valliantos and notable moms who have made a difference in their community.  After you post your event on our website you will get an email with a code for a free box of materials  to share with your guests to support them in having healthy communities. Included is an agenda you may use to run your meeting smoothly. We can start now, in our neighborhoods. It’s up to us moms. It’s time for us to transform the health of our communities and the future of the world.

Thank you for being a part of global health and wellness!