All the MOM PROOF we need that GMO's and related pesticides and herbicides cause our children harm.

Our kids get better when they get off GMO's!*

Just some of over 300 Testimonials from Moms Across America about the health of their children and families in relation to GMOs and Glyphosate: See one of our Mom's video, Jennifer Lawerenson, survey responses and Facebook posts below.

Jennifer Lawrenson and her story about her daughter*

From www.MomsAcrosstheWorld.com- Alice about her village in Uganda, Africa and the impact of GMOs and chemical farming.*

"My son has had severe autism. As a single Mom who makes about 40 K, it's tough but we only eat organic because I found out about GMOs about 2 years ago. When we went organic, after about 2 weeks, my father thought I was giving my son a new drug, because he saw such improvements, but I said: "Nope, just went organic." This year he entered high school and not one of his teachers could tell he used to have severe autism symptoms. He is with the regular class and he is doing well." - Cindy, MAA*

Jennifer Duffy Fehnel-  "At 14 months my oldest son was diagnosed with renal tubular acidosis. It's a kidney condition in which your kidney does not properly dispose of the acid in your blood. This stunts growth and in turn, he is pretty small. In 2008 I asked his nephrologist if diet mattered, and she simply said no. Luckily my gut was screaming something else. After having 3 more kids and losing my Dad to cancer, once the fog lifted I realized we needed to make a change. All that time my son wasn't really growing- he was hugging the bottom of the growth chart. Last year I switched my entire house to an organic (and when not available at least an NON-GMO) diet, and guess who is growing!!! He is being weaned off of his Meds as we speak! So I don't need Monsanto to try to convince me their "food" is safe. We have our own little experiment here that tells me otherwise! Actually, ALL of my kids ( including one who was asthmatic) thrive on an organic diet!"*

"I went GMO-free and after about a month, my Fibromyalgia symptoms went away." - Belinda*

Martina Collom: "I have/had Crohn's and it is terrible. I got it in 1999 at age 18 and went on numerous medications. I ate GMOs back then and I am certain that is why I got it. At one point I just wanted to die, the pain was so great. I understand this misery. I now eat only organic and I am not on any medications been about 7 years since my last med."*

"I had autoimmune diseases for 8 years. I was on different medications for it and actually had surgery for it. It was a living nightmare. I took GMOs almost completely out of my diet 8 months ago and the symptoms are gone! Some of my family think I'm crazy for posting so many food posts about GMOs but I know first hand how devastating the effects are. Doctors said there is no cure for my disease. I found the cure...stop eating GMOs!!!!"- Morgan M.* 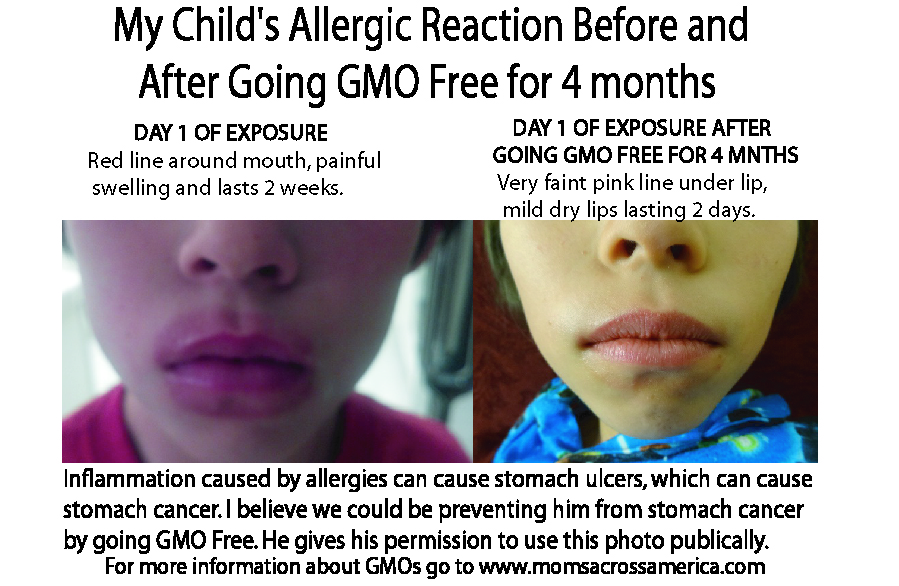 "This picture is my son's improvement to a Carageenan allergy. His walnut allergy has also gone from a rating of a 19 ( life threatening) to mild, a .2. Less than 2% of nut allergies typically improve or go away. I believe we could be saving hs life not only from a sudden anaphylactic allergic reaction to nuts but also from stomach cancer that stomach ulcers that can develop into from Carrageenan."- Zen Honeycutt, CA, MAA*

"When my son was born he fussed a lot, the whole day, wouldn't nap. I breastfed until he was three months old. And because his gut was not right, he fussed and I could never console him. I tried all the gassy meds, not sure they are considered meds. Once on the formula the fussy continued, we switched to different formulas, but not until we switched to parents choice organic, Walmart, his fussy stopped, he began taking naps. As a toddler, I fed him cheerios, the main staple in our house. The tantrums began; two hours at a time couple times a day. This is with head banging or slamming his head into the wall repeatedly. He wouldn't let me hold him, not even touch him. Can you imagine not cuddling your baby? I cried every day. I had watched the movie Food Inc. It touched on a subject I wasn't familiar with. After watching Genetic Roulette, I cleaned out the cupboards. After doing this, within two weeks my son's tantrums stopped completely, he started smiling, crawling into my lap for cuddles. I had no idea that was the issue. Even now when he gets something conventionally/ GMO poison, he'll have another tantrum from his past. So if there's a question as to where it's from what kind of seed, I don't take it. So for me and my family, we bow out from being a guinea pig."- Stephanie Vanderyacht*

"My husband was in the hospital 5 times last year. Doctors wanted to remove part of his intestine because it was so infected instead doctors pumped him full of antibiotics for a week when he got out of hospital I changed his diet and all our family food choices to NON- GMO foods WOW what a difference he’s doing great and food never tasted so good! I will march sign petitions anything to reclaim our healthy labeled food choices. God Speed JUST SAY NO TO GMO’S ….MAAM! " Rhonda Bryne, MAA*

Kristie: "Stopped in at our doctor's office this afternoon to get Caroline's nut allergy info signed for school. They weren't able to complete the paperwork (or refill her epi-pen) because she hadn't been in for a visit in 20 months. My first reaction was to get angry and then I took a minute to let that sink in... 20 MONTHS. My girl with asthma, eczema, chronic pneumonia, food allergies and hip dysplasia hasn't been to the doctor in almost two years! Coincidence that we changed how we eat ( Non-GMO and organic)  almost 2 years ago? I think not! She is living proof that the foods we eat and the products we put on our bodies matter!"*

"My son had a rash around his mouth now and then but since getting off GMOs he doesn’t have that problem anymore. My daughter's tummy used to puff out after meals and she’d get a belly ache. She doesn’t get those after meals since we went off GMOs. I used to feel like my skin was crawling but I don’t get that anymore since being off GMOs." - Larie Olson, WA. , MAA*

Q: Do you or your family members have health issues that you suspect may be connected to GMOs?

*Disclaimer: The above testimonials are a sampling of the hundreds of testimonials which Moms have sent to us. There is no guarantee of specific results and the results can vary. This also applies to any comments any of our users make on any of our pages.