Letter to Lawyers Who Stood Up to Monsanto - Moms Across America

Letter to Lawyers Who Stood Up to Monsanto

I am writing to you on behalf of millions of mothers and our families to thank you for the extraordinary service you have provided to the American people and people, pets and wildlife around the world.

Your willingness to stand up to Monsanto and sue them for their irresponsible and heinous acts of willful harm against the American public has changed the trajectory of the use of glyphosate herbicides and other toxic chemicals for generations. Not only has Monsanto been called out, exposed and held accountable, but all other chemical companies are now on notice, too. You got the ball rolling to END this Chemical Era and we cannot thank you enough.

In case any of your team members are not familiar with Moms Across America, we will share a bit of background on our organization, so they understand why what you have done is so important to us. Moms Across America has been working for 7 years to expose the harms from glyphosate herbicide.

At first, many told us that we should not go up against Monsanto, there was no point. Monsanto was more powerful than the government, the amount of money they had was ridiculous, and the harm that could come to anyone who opposed them would be great. As a mother, it was beyond my comprehension to be stopped in any way. So, we worked for many years, full time, to raise awareness, march in parades, initiate petitions and various campaigns. We initiated the testing for glyphosate in our children’s urine, tap water and breast milk, then the focus on glyphosate expanded exponentially, internationally.  But it wasn’t until courageous lawyers like you took a legal stand against Monsanto, exposed their collusion with the EPA, their ghostwriting, their deliberate manipulation of the science, that other lawyers began suing and TV ads showed up in hundreds of millions of living rooms. We had a mainstream audience. 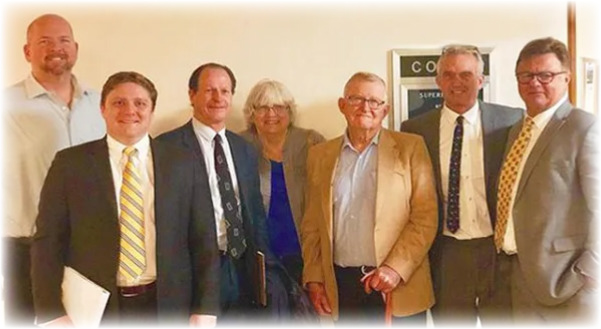 Kelly Ryerson, a concerned mom who is now on our team, attended every day of the first trial and reported on the court proceedings, Brent Wisner’s amazing ability to present the facts despite extraordinary restrictions, and Monsanto’s gaffs to us and the public. Mainstream media began reporting on Monsanto. Your lawsuits reached millions. Suddenly hundreds, probably thousands, of landscapers, cities, counties and even countries that knew about the lawsuits stopped using glyphosate herbicides. A recent conversation with my HOA’s landscaper ended with him admitting that 95% of his customers require organic. Grain distributors like an oat processing plant in Canada and a barley distributor in Australia are no longer accepting grains if they are sprayed with glyphosate. Even Costco stopped selling glyphosate after Lee Johnson won his case with your determined efforts and we petitioned them. Citizens across the country had a renewed sense of hope and justice.

Your courage made a difference in ways that no one else could have. You risked years of your life and probably literally your life, to achieve something that I am sure many also told you was impossible. Thank you. We may not have ever met your entire team, but we feel as if we have been in partnership for years. We may never meet your families, but with deep love and appreciation we ask you to thank them for their generosity and willingness to share you and your time with the rest of the world. The contribution you have made, with their support, has and will continue to impact generations of life on earth.

Thank you on behalf of millions of mothers and people who care about life on Earth.

Do you want to see Roundup removed from the shelves? We do!

It's not enough for bayer to pay off cancer plaintiffs. join us in demanding further steps by Bayer, who now owns Monsanto. Tell Bayer to RETIRE Roundup Now!