“European Member states, after considering volumes of scientific studies and numerous testimonies by lawyers and researchers, have refused to renew the license for glyphosate. If it is not safe for Europeans, and Malta, Sri Lanka, The Netherlands, and Argentina who have banned glyphosate, then we do not want glyphosate in our United States. We urge our governors to take bold steps like the Governor of Arkansas and Missouri did in banning Dicamba, and ban glyphosate herbicides and toxic chemicals immediately.” - Zen Honeycutt, Executive Director of Moms Across America 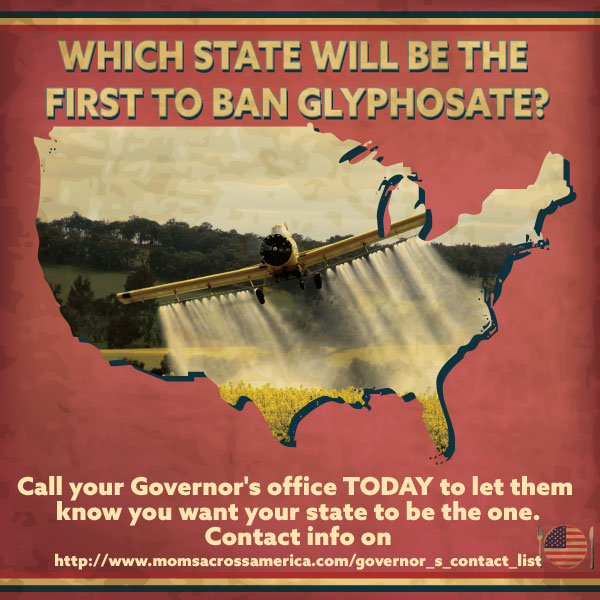 Glyphosate herbicides or Monsanto's RoundUp weed killer, the most widely used herbicide in history, has been proven to cause serious harm to life. Glyphosate has contaminated our planet and is now found in our children's urine, mother's milk, our bloodstreams, and our food, beverages, and water.

In 2015 the International Agency for Research on Cancer (IARC) of the World Health Organization found that glyphosate “is a probable human carcinogen.”

In July of 2017 the California State Office of Environmental Health Hazard Assessment (OEHHA) added glyphosate to its Prop 65 list of known carcinogens.

In October of 2017, after 1 million Europeans requested a ban, 72% of the Members of the European Parliament voted to BAN glyphosate and EU Member states have refused to renew the license.

Sri Lanka and the Six Gulf States-Saudi Arabia, Kuwait, the United Arab Emirates, Qatar, Bahrain, and Oman have banned glyphosate. Many others are in the process of doing so. France has banned glyphosate in public parks immediately and will phase out the use of glyphosate herbicides in agriculture and landscaping use over the next 5 years completely. We ask our Governors to protect our citizens as well.

Glyphosate ban requests are already being considered by Governor Brown of California from the CA Guild . Pesticides including glyphosate have already been banned in Connecticut for use on school and daycare grounds. The Governors of Arkansas and Missouri have already banned Dicamba, proving that statewide action can be taken to protect citizens.

Glyphosate herbicides have also been found to be linked to various cancers specifically lymphoma, are endocrine disruptors, neurotoxic, and a cause of liver disease. Global studies show that we are routinely exposed to dangerous levels of glyphosate. Millions of citizens in all fifty states come in contact with glyphosate daily. The American Academy of Pediatrics has stated that our children are the most vulnerable to pesticides, we need to take action to protect the future of our state.

Over 1000 Americans are currently suing Monsanto, the manufacturer of glyphosate herbicides, for Non-Hodgkin Lymphoma. The Justice Department is investigating Monsanto for corruption, coverups, and collusion with the EPA in relation to the carcinogenic effects of glyphosate.

All 50 state governors are being petitioned by moms and supporters through Change.org and local state residents from each state are launching a mail-in campaign today requesting meetings with their governors. The campaign came together in just 5 days after The Doctors aired an episode of the Monsanto lawsuit and the EU members refused to renew glyphosate.

Honeycutt adds, “Now is the time. Our country is in an unaffordable and tragic public health crisis. Toxic chemicals have been shown to contribute to or cause many of these health issues, especially for our children.  It’s time for our states to take actions that our EPA is not willing to take. They can, must and we believe, will protect our citizens from irreparable harm. It’s just a matter of which state will be the first to ban glyphosate?”

Note: This article has been corrected due to an inaccurate source article. Malta has not enacted a full ban and Argentina and The Netherlands are in the process of enacting bans, but they are not official.

Moms Across America is a 501c3 non profit organization whose motto is "Empowered Moms, Healthy Kids."

Here is a listing of the link to the petitions by state: