Poison Foods of North America at Moms Across America

The Canadian Food Inspection Agency tested 7800 food samples between 2015 and 2016 primarily from Canada and The United States for glyphosate.

100% of some types of food samples were positive. 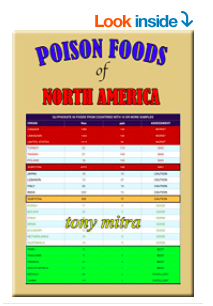 This book is one of a kind with analysis of near 8000 records of foods tested in Canada for glyphosate by Canadian Food Inspection Agency (CFIA recently. Tests cover foods from over 60 countries, the bulk of which were foods produced in Canada and the United States, followed by India and China. No other country has conducted this many tests on food for glyphosate and no other analysis exists on this data as of now.

North American foods are most contaminated by glyphosate, the active ingredient in Monsanto’s Roundup weed killer, the most used herbicide in the planet.

The book is over 380 pages long, with over 90,000 words, and nearly 400 tables. The data is sorted in chapters, on glyphosate in food according to country of origin, and separately as per food types, such as grains, beans, flour, lentils, fruits, vegetables, and ready made meals, organic and gluten free foods. A lot of raw data figures are included.

Attention is given to foods produced in North America, which contribute a bulk of the samples, followed by foods from India and China and a comparison between them.

Some of the findings were as expected while some are totally unexpected, and often shocking.

Here are a few examples:

The book Poison Foods of North America (with a free viewing) compiled by Tony Mitra can be found here.