On November 15th the National Day of Action to stop the Dakota Access Pipeline, Moms Across America was supported by over 60 donors who gave over $4500 for us to go to Standing Rock, help as we can, report on the efforts, and donate supplies. Our supporters gave their resources to be a part of this historic movement of water protectors because it is yet another example of the corporate bullying of our government to put the profits of companies before the health of our people.

Moms Across America has a history of amplifying the voices of the moms. One of our supporters, Zoe Swartz said, “The rights of the chemical companies to make a profit in no way surpass the rights of a mother to protect her child.”

The following is the account of Zen Honeycutt - Founder and Executive Director of Moms Across America. 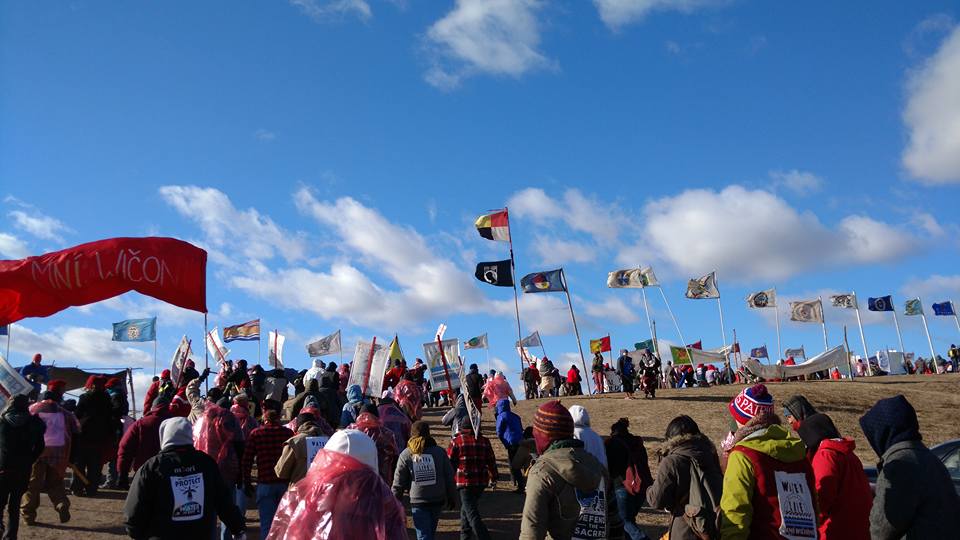 The early morning light glowed dusky blue as the Standing Rock main camp, Oceti Sakowin rolled into view below us. My family and I released a collective gasp as hundreds of tipis, yurts and tents covered the valley by the Missouri River. Flags from over 300 tribal nations flapped in the wind, colorful images of bears, eagles, and symbols of earthly creatures. It appeared heavenly. Images of Dances with Wolves movie sprang to mind and my eyes filled with tears to see a modern day gathering of many races, honoring the Indigenous people in North Dakota, in reality before us.

However,  reality is harsh  -- and as I write this in the business center nearby, after a day of action, a young man recounts how he was arrested by local police last week for no reason, beaten, had all his camera equipment stolen, and traumatized by the people who were supposed to be protecting him. With a gash on his head, he was called “scum of the earth” .  What is even more disheartening, is that he has lost all faith in his government. There is not much more soul crushing than to see a young person without faith. 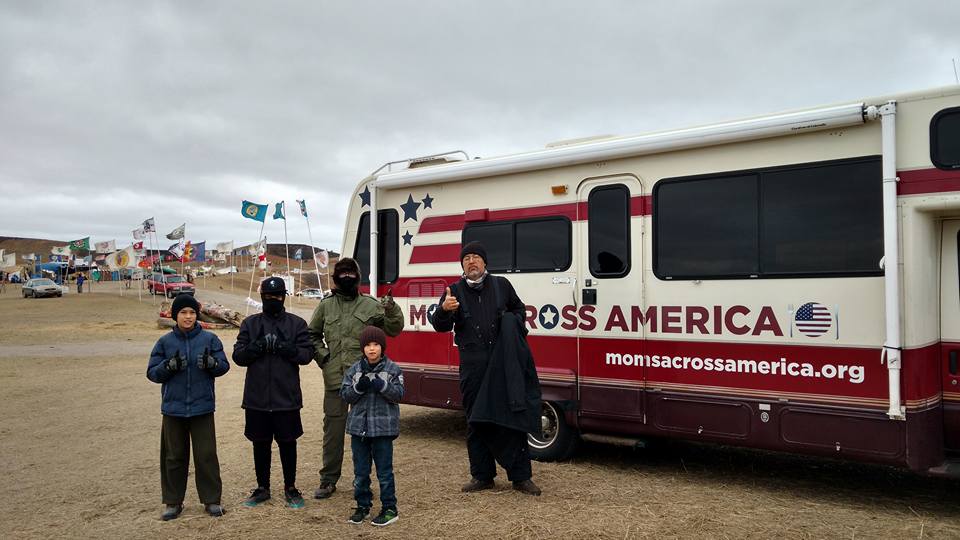 Earlier that day, I was full of hope however, the sheer numbers, over 9000 reported, that have come to support the water protectors, is awe inspiring. As we pulled into the dirt road, Native American security stopped and cleared us. The young warrior had been at the camp since July and you could tell he was proud.  Driving down the Crazy Horse Lane, with hundreds of flags around us is a moment I will never forget. Epic is a word that comes to mind. We settled in near a new barn being constructed, as the camp was feverishly preparing for winter.   The night before was the first night of snow. It was bitterly cold and the wind never stopped. Never.

Before we could even get a lay of the land and unload supplies, my family, Moms Across America assistant Lisa, and her son wrapped ourselves into as many layers as we could and headed to the community meetings. The meeting all begin with prayer, sage and grounding deep breaths. We are all reminded to be mindful of the fact that this is an Indigenous lead ceremonial prayer camp, not a music festival or activist protest gathering. We are here in support of the water protectors. We are here to be useful, generous, and honest. And that is what we intend to be. After the community meeting we went to an orientation in a cold military style rectangular tent with stoves that remained cruelly cold. Then we quickly signed the legal documents in case we went to jail, and finally moved to take action. The “Heart Action” was created by the Youth Council and it was a day to honor women, namely Red Fawn, who was in prison for reportedly grabbing a gun and firing three shots in the air. She faces 20 years.

After a ceremony of moving speakers and homage to Red Fawn, we walked in solidarity, hundreds of non-native women first, then Native women, children and our men behind us.  This was a risky move, as many of the direct actions in the past few months have resulted in horrifying police brutality: macing without warning, rubber bullet shots fired, dog bites, beatings and severe injuries. We were banking on the fact that we were unarmed women and children, appealing to their human decency, to not harm us and allow us to pray on the bridge before the barricade which kept us far from the drilling platform for the pipeline. It was a somber walk in silence. 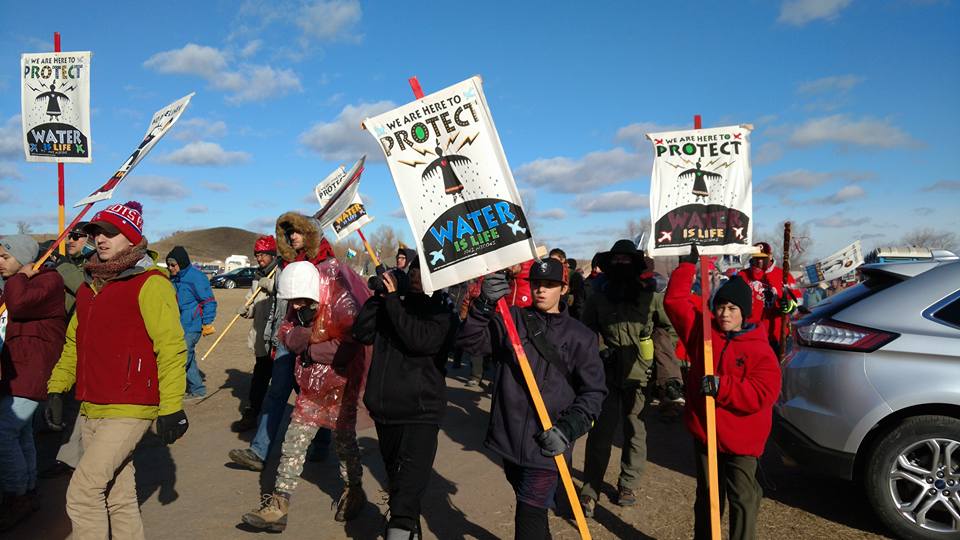 Many of us were dressed in Red to honor Red Fawn and the women wore skirts to signify being in prayer. Our Water Protectors flapped in the brisk wind and our sons silently struggled to hold them up.  First we spelled out “Free Red Fawn” by the river bank with our bodies for an aerial view photograph. As we sat on cold mud we were warmed by greeting our neighbors, from Washington. Wisconsin, New York, Mexico and beyond.  After the drone got the shot we arranged ourselves for the prayer on the bridge. Non Native women in front, then native women, children and our men. I became anxious however from being separated from my littlest one who was cold, had a cough and was acting droopy, so I gave him a piggy back and kept him with me. I struggled with thoughts of risk- was keeping my child with me an act of protection or endangering? What world did we live in that walking with hundreds of women to a bridge to pray for clean water a risk to my child? We walked slowly to the steady beat of a drum in silence towards the barricade. Two camouflage military trucks blocked the bridge reportedly burned out by the DAPL workers to make it appear as if the Water Protectors were violent. They had not been moved for weeks, blocking the road to Bismark and making it much more difficult to take a detour. Rolls of sharp prison barbed wire blocked either side of the bridge. They were clearly preventing passage of the water protectors, general public and even emergency vehicles through this public road.

We walked arm in arm to the front lines, paused then sat in silence. A policeman's voice broke the silence by mega phone, demanding we leave. An elder Native women moved to negotiate and we continued to pray. Apparently it had been arranged so we sat there, hundreds of women and children, backed by our men, by young warriors on the side, vigilantly protecting us, and we prayed. Tears rolled down my face as I was moved by the commitment of the people around me and the connection to God, the universal intelligence, the Creator, the spirit in all of us that creates love and life. 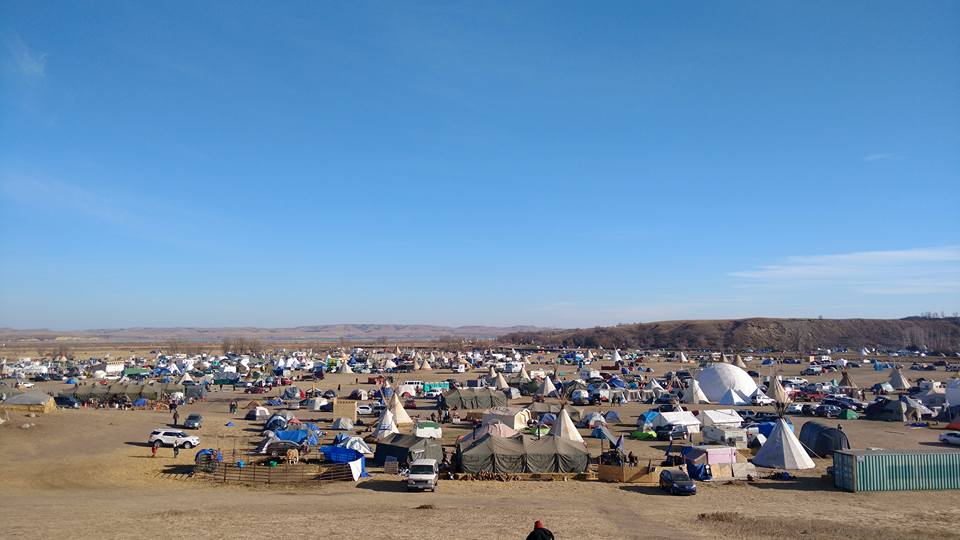 As we sat in silence, I closed my eyes and listening to the wind blow and felt the sun warm the numbness of my face.  There was a rumbling on the road and I heard vehicles approach.  My eyes flew open but I could not see past the barricade.  It had to be the police approaching - many of them, but I couldn't be sure.  I went into high alert, but all around me the women were still and calm.  No one shifted or turned to each other to whisper.  They remained resolute, prayerful, and powerful.  I was never more proud to be a woman.
I later learned that twenty five police cars had showed up because of our ceremony.  I don't think that having a showdown with a bunch of women sitting on a road was what the policemen had in mind when they promised to "serve and protect."  The police had come from five different states to confront the Water Protectors.  These are resources that are being diverted from local tax payers, unnecessarily.
We prayed and left the bridge unharmed. We hugged each other, grateful that we were not arrested today. Grateful that the Norwegian Bank has pulled out 120 million dollars from the project. Grateful that we are, as a massive gathering of many races, many cultures, here in solidarity for one more day with the water protectors.
Do you like this post?
Tweet