Words cannot express how grateful I am that Stephanie Seneff wrote this book. Although I confess I do not have the scientific training to understand all of the descriptions of the mechanisms described, I am clear that the pathway of glyphosate harm is clear to the author and will be to other scientists and regulatory officials. I understand enough to know that the science she has compiled must be heeded by other scientists, regulatory, and elected officials, and that is what is important. We mothers, parents, voters, consumers, citizens, and humans who can hold officials to account and shape the marketplace play a crucial part in the future of the human race on our planet, which is why even the layman must read this book.

In Toxic Legacy, Seneff clarifies how glyphosate is involved in dozens, potentially hundreds of serious ailments plaguing our society.  She discusses everything from autism, cancer, loss of Bifidobacteria in breastmilk, cancer, diabetes (a whole alphabet of ailments) to vitamin deficiency and glyphosate/zinc’s role in skin cancer. The number of ways that glyphosate is not just linked but contributing to and causes harm to human health is staggering. Almost unbelievable....until you read this book. Then, the enormity of glyphosate's harm overcomes any doubts or fears of criticism in claiming that glyphosate is at the top of the list of one of the most harmful substances on the planet. Its impact is so huge that we may not have any chance of recovering individual or societal health without banning this chemical.

Seneff describes how glyphosate contributes to the following and more :

With the science in this book, the only criticism pro GMO and glyphosate proponents will be able to muster are trumped-up character attacks. As a person who has interacted with Stephanie Seneff numerous times and has seen her interact with the public, address their concerns and react to the lack of credit she has given for her work. I can assure the reader that any character attacks are baseless. Her humble commitment and tolerance of ego-driven opponents have proven her to be one of the greatest threats to Big Ag - a person of integrity, compassion, and generosity. 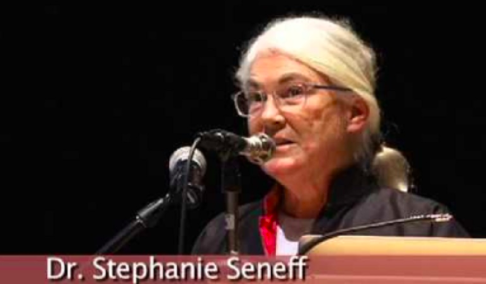 At one point, our team listened to the advice of other scientists and allowed them to influence our decision-making and did not include her name as an advisor to some of our articles. Her name was “too controversial,” they claimed, and would get in the way of the information we were trying to convey. However, after reading this book, I better understand why Monsanto’s shills and other scientists have to call her and anyone who associates with her a “loon.” They have no other recourse. The science she has analyzed and presents speaks for itself. And the gravity of her theories and papers with hundreds of sources from peer-reviewed studies is so large that it shakes the very foundation of life on the planet. The scientists who are threatened by her work know this.

Fortunately, the work she does is not about her gaining credit, and when we did not include her name, she was gracious and did not take it personally or withdraw her scientific contributions. It is work like this, done purely to expose the science that can contribute to improved health, that must be acknowledged and utilized in policymaking.

Seneff’s commitment to scouring science and bringing the myriad of harmful pathways from glyphosate to light is an invaluable contribution to society. It should be required reading for every Governor and elected official today. If it were, glyphosate would be banned this week.

The following are review phrases that anyone can use to share this book on social media or with their teachers, elected officials, landscapers, physicians, family, and friends:

For anyone who has wondered why human health is declining, and health care costs are skyrocketing at alarming rates, read this book. The science is undeniable. Glyphosate is a major culprit and must be banned.

As a mother, the gratitude I feel for the author, whose work will impact current and future generations of children, is indescribable. As a human, I believe her work should be awarded a Nobel Prize, or even better, revoking the license of glyphosate. For those of you who are scientists, I would imagine you would be proud that one of your kind still has the courage to speak out against the behemoth chemical companies and share the independent science that truly matters to life on earth.

Whether layman, parent, politician, or scientist, this book will surprise and challenge everyone interested in how glyphosate contributes to the destruction of our children's potential, our family's health, and the future of the planet.

Seneff, backing nearly every sentence with a scientific study, has irrefutably made a case for the immediate ban of glyphosate.

For anyone who cares about the future of life on our planet, read this book. Seneff connects the myriad of health issues plaguing modern society with glyphosate herbicide with so much science that no one, not even Monsanto/Bayer, will be able to refute that glyphosate must be retired.

Seneff's book Toxic Legacy is a gift to future generations if we choose to accept it. Rachel Carson is singing in heaven that her work is being continued. All we need now is for policymakers to acknowledge the cumulation of irrefutable scientific evidence gathered in this book that glyphosate must be banned.

This book should be read by every Governor, physician, parent, and policymaker around the world.

There is nothing more important than the health of our current and future generations. There is nothing more costly than jeopardizing the physical and mental health of generations of our populations. Without our health, we cannot effectively combat climate change, homelessness, poverty, racial injustice, addiction, or other daunting issues. This book unlocks why we should and how we can resolve a myriad of skyrocketing health issues plaguing society. If heeded, the result of banning glyphosate would put us in the direction of recovering our health and the future of human life on this planet.