Modern e-cigarettes were introduced to the American market in 2006, after Chinese pharmacist Hon Lik invented them three years prior as a means for him and his patients to quit smoking traditional cigarettes. While Lik intended for his e-cigarettes to help users quit smoking, he still smokes cigarettes and vapes on top of that. The device Dr. Lik invented is currently owned by Imperial Tobacco, a cigarette company based out of Bristol, England.

Lik’s story is a prime example of the addictive nature of e-cigarettes, and he is like many other smokers whose addiction to nicotine is now being exploited by financially motivated execs at e-cigarette companies like JUUL Labs, Inc.

JUUL is the most popular brand of e-cigarette, most notable for its slim, compact design that looks like a USB drive. The easily-concealable nature of the vape pens, however, is what makes them so easy for teens to get their hands on – and to hide from their parents and teachers. Teen vaping has become an epidemic in the US, and raising the age to purchase from 18 to 21 in some states is not helping. There are now teens who will buy fake IDs with the intent to purchase e-cigarettes and flavored “vape juice.”

It is not the teens’ fault that they are addicted, though e-cigarettes are specifically marketed toward them. According to the Centers for Disease Control and Prevention (CDC), 90% of cigarette users and vape users began smoking before they were 18, making high schoolers the target audience of tobacco companies. In September 2019, the FDA sent a warning letter to JUUL Labs, stating that the manufacturer “is violating the law by marketing its products as a safer alternative to cigarettes,” according to NPR. In the letter, the FDA also warns that JUUL has illegally been marketing its product to teenagers in order to create lifelong customers. 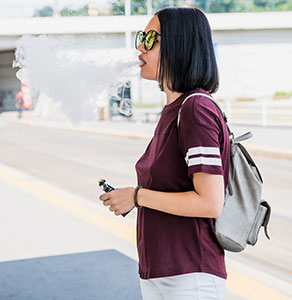 The dangers of vaping are much more severe than just a cough or decreased lung function. The devices’ high concentrations of nicotine have been linked to seizures and nicotine poisoning, according to lawsuits filed by parents of teens who have been harmed by their vape pens. The CDC is currently investigating eight vaping-related deaths and more than 530 vaping-related hospitalizations of Americans. This “outbreak of lung injury” associated with the devices has led health professionals, school teachers and parents to urge the government to act on this growing epidemic.

Currently, Michigan and New York State have banned the sale of flavored e-cigs, and New York’s ban has already gone into effect. A proposed nationwide ruling may soon make the flavored pods illegal countrywide. Parents are growing increasingly concerned about their teens picking up this habit and, until all vaping devices are outlawed, need to set aside time to discuss the dangers of vaping with JUUL’s most targeted audience.

As you consider this information, we hope you will utilize it to have a frank and heartfelt talk with your children about vaping. When vaping first came out, I calmly shared with my sons that one container of vaping gases contains as much nicotine as a whole pack of cigarettes, and they were surprised. I sent them a few links to look at for themselves and told them I trusted them to make healthy choices. Later, at the beginning of this school year, when I was dropping my son off to hang out with his new friends, and we passed a vaping shop, I reminded him not to go there with them...even if his new friends thought it was safe, I reiterated that it was not. He said, “Mom, don’t worry, I make sure my friends don’t vape.”

More information about the dangers of e-cigarettes can be found at these resources:
https://www.hopkinsmedicine.org/health/wellness-and-prevention/5-truths-you-need-to-know-about-vaping
https://www.yalemedicine.org/stories/teen-vaping/
https://e-cigarettes.surgeongeneral.gov/