The Monsanto Emails: Not Just "Talk" - Moms Across America

As disturbing as the emails are, we are not completely surprised. Moms Across America, myself and my family have experienced character attacks, accusations, misogynisitic name calling, and aggression for years. Undoubtedly these attacks were by the "third party" these emails refer to, as part of Monsanto's Let Nothing Go program. Although we prefer not to expose and dwell on the negativity, and did not publicize the attacks we were experiencing at the time these emails were written, we are glad that the true nature of Monsanto’s employees and advisors is being exposed. The words "beat the sh** out of moms" were not just a laughable threat. Just five months after these emails, it was reported that Sofia Gatica, a mother in Argentina who lost one of her babies to pesticide poisoning while living near a GM/agrochemical farm, was beaten. 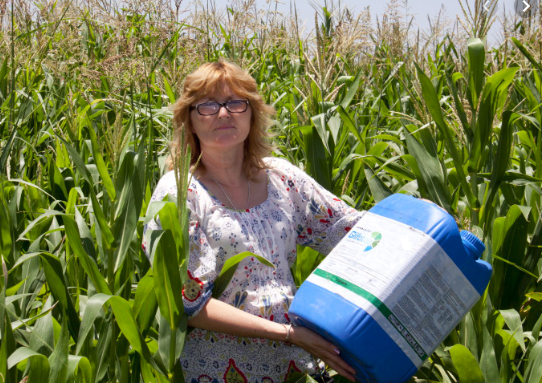 GM Watch reported in November of 2013, "Two men attacked Sofia Gatica in district Acosta, Córdoba today, a few meters away from where she works. Just 72 hours after environmental activist Sofia Gatica received a terrifying death threat, she continues in fear for her life." She described the beating and the report added, "Sofia has been spearheading a blockade against construction on a new Monsanto plant in Malvinas, Argentina. The blockade is in place 66 days and will remain indefinitely. It appears Monsanto has taken notice of the disruption." Sofia persevered and won... the Monsanto factory was abandoned, but many activists around the world and n the United States continued to be threatened, harassed and some, like Mila de Mier, have even died mysteriously.

Activists and our moms are grateful to the courageous cancer patients and lawyers who are standing up to Monsanto and have sued them, because in the discovery process of their lawsuits, the truth about Monsanto’s intentions and trusted University professors is being revealed.

The emails have several implications beyond a reputational stain for Monsanto/Bayer:

These emails reveal not only Monsanto’s and the University Professor's complete disregard for mothers, who buy 85% of the food, but a violent and misogynistic attitude that must not be tolerated in corporate America or our Universities. The public has a right to know that professors at the University of Illinois and Georgia have conspired with chemical corporations to protect the reputation of a chemical company rather than research the validity behind consumer health concerns. It has been revealed in the court documents that Bruce Chassy received $57,000 from Monsanto and did not disclose his financial relationship with Monsanto on state or university forms, demonstrating a clear conflict of interest. Documents further show that Chassy and the university directed Monsanto to deposit the payments through the University of Illinois Foundation, a body whose records are shielded from public scrutiny. The foundation also has the ability to take in private money and disburse it to an individual as a “university payment”-- exempt from disclosure. Loopholes like this make it clear that it is time for these universities to reassess their values, be transparent, and employ only trustworthy professors with a real concern for public health.

These emails also show a dangerous corporate mentality and provide further evidence why GMO chemical companies must be carefully regulated. Recently, however, President Trump signed a new USDA policy that allows GMO companies to self-determine if their product should be regulated by the USDA. This pending USDA policy change would allow GMO manufacturers such as German owned Bayer/Monsanto, Chinese owned Syngenta/ChemChina, and US owned Dow/Dupont, to decide for themselves whether or not their GMO technology needs safety regulation. They also allow for these corporations to grow pharmaceutically engineered plants in open air test plots, creating an uncontrollable and irreversible pollen drift and contamination risk. These corporations monopolize the food supply.  The new Monsanto emails expose the true mentality of the GMO and chemical company employees- one which completely disregards public health.

Mila de Mier was found dead in a hotel swimming pool in Florida the day before she was to deliver a petition protesting GMO mosquitoes. 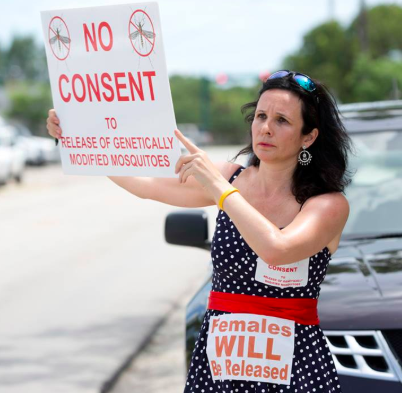 These emails also show a complete disregard for mothers, consumers and children’s health. Ironically, Monsanto claims to “Feed the World” and has a mission stating, "We will deliver high-quality products that are beneficial to our customers and for the environment, through sound and innovative science, thoughtful and effective stewardship, and a commitment to safety and health in everything we do.”

However, when our mother’s group wrote our Open Letter to Monsanto,  a clear request regarding the products they produce and that our families eat, a request that was backed up with source links, statistics, and science, their response was, let’s “beat the sh*t out of them” (“them” being “dumb mothers”) instead of a more appropriate response, such as: “Gentlemen, let’s look into this. We may have a problem, let’s fix this...let’s look at our products and reconsider their safety.”

In the email with the two University Professors, Goldstein acknowledges the progression of health issues claims over several years by saying, “This suggests a child health focus for the anti-GM campaigns in the future - or perhaps I should say it is confirmative as all three of us have watched the evolution in this direction over the past several years.” They knew that child public health was going to be a reputational and perhaps a product issue problem for years, and did nothing about it. They were not focused on growing food to nourish, support and feed the world, they were focused on growing their profits. Clearly these are not people we should trust to regulate our food.

Just because Monsanto has been absorbed by Bayer does not mean that this contemptuous attitude has gone away. Bayer’s refusal to pay cancer patients, ignore the judicial process, and not pull glyphosate-based products from the market are clearly examples of that same disregard for public health. If Bayer did not have the same mentality as revealed in these emails, they would pull Roundup and glyphosate-based herbicides from the market and pay the awards granted to the plaintiffs.

They got two things right in these emails -

However, the emails claim that the Open Letter to Monsanto that I wrote was “bought and paid for by the organic industry.” That accusation is completely false. At the time, I was a volunteer. For three and a half years, I did not receive a salary for my full time efforts to raise awareness about the food supply. The small amount of funding we did receive at the time of the first parades, from a few companies that sold some organic, all went to flyers, banners, t shirts, buttons, and stickers. In addition, our major funders are currently not from the organic food product industry. Mothers do not need to be "bought" to feel compelled to speak up for food safety. All we need to do is to look at our children and families.

March Against Monsanto was started by an American mother, Tami Canal Monroe, and the events circled the globe. 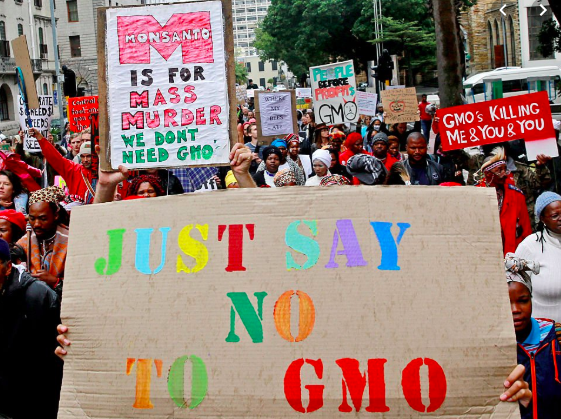 They guessed that moms wouldn't get much attention as well. They got that wrong. Mothers buy 85% of the food and since we began marching in parades and raising awareness with many other consumer groups, The Organic Trade Association (OTA) has reported that 82% of households now buy some organic regularly.

After years of consumer pressure, General Mills is now instructing suppliers to no longer use glyphosate, Bayer/Monsanto's key product, as a drying agent on crops.

The fact is that mothers have been and continue to be a threat to GMO and chemical corporations because of our purchasing power and because our only special interest is the well-being of their families and communities. Mothers call for health and safety, which must come before corporate greed if we want to reverse our health crisis, reverse our climate emergency, and allow for humans and life on the planet to thrive.  The ironic thing is, we don't want to be a threat to food producers, we just want them listen and be responsible for producing safe food.

These emails reveal how important it is for the regulators to step in when corporations are not responsible. The EPA and USDA, agencies charged to protect public health and the environment, must actually regulate corporations and for the public to hold our Senators and Representatives to account for ensuring that the regulatory agencies do their jobs. Unfortunately the current administration, like many others , plans only to deregulate GMOs. Without political will, policies will not change and corporations will continue to pollute not only our food, water, and environment, but the integrity of our universities, educational systems, and government as well. As  we pass another comment period (September 3, 2019) in which over 350,000 people commented in total on the glyphosate license renewal or denial process, which has lasted nearly a decade, one must wonder if our EPA will continue to cherry pick studies provided by companies such as Monsanto that churn out such hateful rhetoric and disregard for public health, or if they will consider the studies by independent scientists who get their papers peer reviewed. 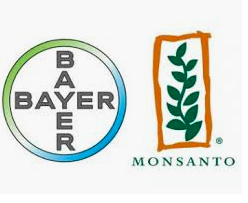 The University of Georgia professor warned against remaining silent. “Rolling over and playing dead is not an option. Silence implies being guilty of everything you are accused of.” - Wayne Parrot

The biggest problem is not, however, the violent and misogynistic behavior of a few men associated with Monsanto. The biggest problem is the fact that Bayer chooses, every day, to continue to sell a product that numerous scientific studies and decades of evidence have shown it to be harmful, and our regulatory agencies allow it. This disregard for public health is Bayer’s real problem and is one that will not go away by filing another appeal. The only act that will stop the decline of their reputation is  for Bayer to discontinue the sale of glyphosate based herbicide and similar toxic chemical products.

Until then, Moms will continue to speak up for the health of our children and communities, no matter what names or threats are hurled our way. 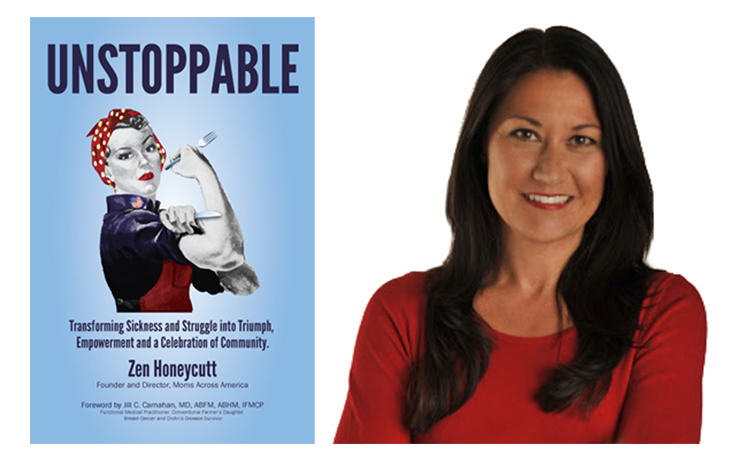 Zen Honeycutt is the mother of three boys whose health has dramatically improved by avoiding GMOs, related toxins, and going organic. She is the author of UNSTOPPABLE, instigator of the first consumer glyphosate testing project in America, and Founding Executive Director of Moms Across America. Find out more about Moms Across America's new initiative, where mothers take matter into their own hands.... with the Moms Across America Gold Standard.