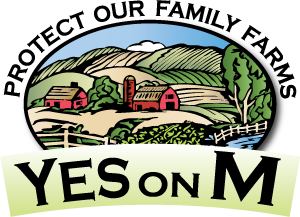 Sonoma County – Today, with 100% of the precincts reporting, Sonoma County’s Measure M Campaign declared victory with 55.9% of the vote.

“After five years educating the residents of Sonoma County and three years working to pass this ban, the voters have spoken, and we are delighted with their support.  The majority of voters understand the importance of preserving our local agricultural heritage for future generations.” said Karen Hudson, Campaign Manager “Yes on Measure M

Measure M will prohibit the growing of GMO crops in Sonoma County protecting local farms, pastures, and cover crops from contamination.  Because pollen cannot be contained, contamination from GMO crops has resulted in millions of dollars in lost export revenue for farmers throughout the country.

Sonoma County’s agriculture embraces its local family farms, which are organic or non-GMO. Measure M was designed to protect their right to grow using traditional methods.

It was endorsed by hundreds of local farmers, vintners, businesses, community organizations, and thousands of individuals across Sonoma County.

GMOs are not delivering the promise of higher yields. Heavy herbicide spraying is creating herbicide resistant weeds and affecting the microbial balance in the soil.  Nutrient deficient soil and resistant weeds are reducing crop yields.  As we begin to understand long term impacts, both consumers and farmers are moving away from GMOs.  More than 35 countries prohibit growing genetically engineered crops and many have restrictions on imports.

"We are thrilled that the people of Sonoma have seen through the pesticide industry’s corporate public relations spin as expounded by both UC Davis and the Farm Bureau during the campaign. Sonoma County has sent a loud message that the control of our agriculture and plant genetics should remain in the capable hands of our local farmers.” 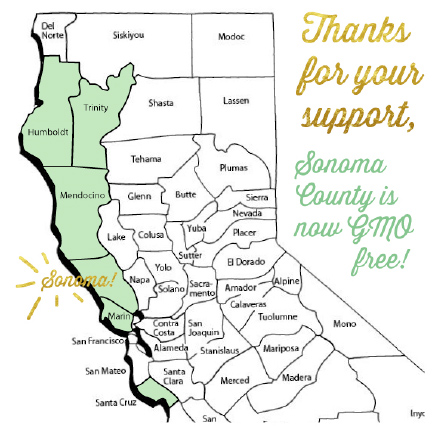 First, a person or legal entity who is already raising or growing genetically engineered organisms in the County on, or before, the date Measure M was approved by the voters of Sonoma County, shall be permitted to maintain such organisms until the end of their natural growing cycle. At the time of harvest the plants must be removed, and they may no longer grow GMOs.

None of the provisions of Measure M shall be construed to permit any person or other legal entity that is not currently in possession of genetically engineered seed or already propagating, cultivating, raising or growing genetically engineered organisms in the County to begin to do so after this Ordinance is approved by the voters of Sonoma County.

Other than Section 7(a) above, none of the provisions of the Ordinance shall be construed to permit any person or other legal entity who is already propagating, cultivating, raising or growing genetically engineered organisms in the County to propagate, cultivate, raise or grow any genetically engineered organisms not already living and established in the County, or otherwise to begin any new activity prohibited by Section (5) of this Ordinance, after it takes effect.

“Citizens for healthy farms and families would like to thank all of our endorsers, those giving donations, volunteers, steering committee members, and voters for giving our farmers, dairies, vintners, wildlife, families, and environment the same protection provided five other CA Counties.” - Karen Hudson.