Protecting our animals - Moms Across America

Many ingredients in pet food do not have to be disclosed, and many euphemisms can be used for some of the unhealthy ingredients. According to Slate.com’s Jackson Landers, from his article “A Dog-Eat-Dog-World”: 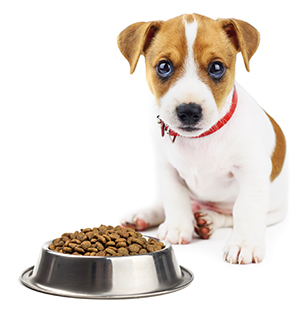 There is essentially no federal enforcement of standards for the contents of pet food. Officially the FDA has authority, but the agency has passed off regulating the standards to nongovernmental organizations that encourage mostly voluntary compliance with the few federal standards.

Under Food and Drug Administration regulations, only about 50 percent of a cow, for instance, can be sold for human consumption. Personally, I do not have a problem with my dogs eating the “undesirable parts” of animals. In the wild, they would have eaten anything that they could break down with their teeth, which would have been almost everything. There would have been one exception, however—they would not eat meat that was rotten or diseased.

Today, however, according to animal rights activists, animals are fed food that could easily be rotten or diseased—including meat from other cats and dogs, roadkill, and expired grocery store meat still in the Styrofoam packaging. Of course, they are also eating unregulated meat from animals fed GMO grains sprayed with a vast array of pesticide, herbicide, and fungicide residues.

Tests have been conducted of over 60 dog urine samples and scientists found an average effective glyphosate level of 16 ppb which is more than 30 times the human average. In general, dogs with the highest urine glyphosate levels are consuming conventional grain-free kibble.

The Canadian Food Inspection Agency, which tested more than 7,000 samples of food from primarily the USA and Canada, showed high levels of glyphosate in crops that make up the majority of the ingredients in pet food. Conventional grains and legumes such as wheat, lentils, and garbanzo beans have very high levels. Some of the test results here. 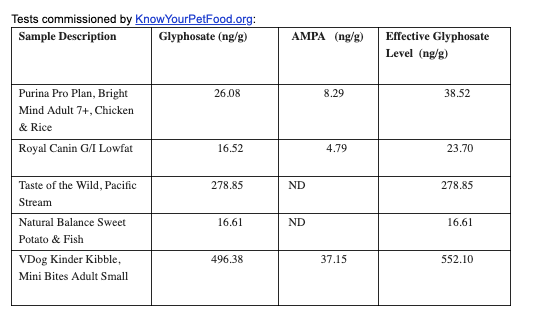 Glyphosate bioaccumulates in bone marrow, so any amount is concerning. There should be zero glyphosate herbicide and toxins in our pets’ food. It is simply animal cruelty to feed our pets poison. 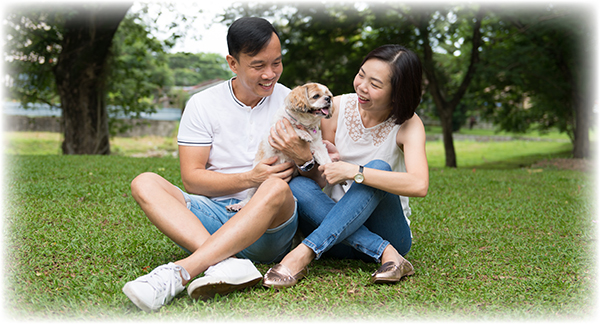 What can we do? This is a tricky one. Website resources Dog Food Advisor and Modern Farmer suggest that pet owners buy organic food sourced from animals that are humanely raised. If that isn’t possible, they suggest the following:

Buy natural ( we say organic) pet food as much you can and add in your leftover, diced-up human food organic scraps. Dogs that eat vegetables mixed into their dog food get 70 percent less heart attacks. Chop up your salad scraps, vegetable stems or tops and add them to your pet’s food. Pets need their veggies, too! Be careful with certain human foods, however. There are many human foods dogs should not eat, such as grapes, raisins, chocolate, and cooked poultry bones (raw are okay). Butchers will often give you leftover meat, bone, or fat scraps for free if you tell them you are feeding it to your dog. Cook them up (to kill any possible parasites) with a little Himalayan Pink salt for minerals and your pet will be thrilled.

The responsibility for the health of our fur babies falls to us to go beyond the labels.

In addition to consuming Roundup and glyphosate based herbicides in their food, our pets walk and lay in glyphosate herbicides when our city workers, family, or neighbors spray our yards, sidewalks and driveways. Ask your town, neighbors, or family to use safe alternatives that we have listed on our website. We recommend, for the people who refuse to give up a spray, Pulverize weed killer for organic gardening. It works! And a portion of proceeds from using MAA DEAL on https://www.pulverize.com/ go to Moms Across America to expand our educational outreach programs. Pass out our "Protect Your Pet and Family!" flyers and be the ones to Ban Glyphosate on your Block!

UPDATE: Since the writing of my book, I trusted a veterinarian assistant when she told me a flea medication for a very bad case of fleas would be safe for my otherwise completely healthy dog. My dog died within a month from pancreatitis and diabetes. According to a holistic veterinarian, Pancreatitis can be caused by a toxic overload from medications and toxins in vaccines and once the pancreas cannot make insulin, diabetes sets in. I urge the readers to research any and every medication or natural remedy you give your pets or family members before administering it. If I had, I would have seen the Facebook page “Did NexGard Kill My Dog?” and I would not have given that flea medication to her. Reducing exposure to toxins is crucial for the health of our pets.
Here are some tips I have learned since this experience that may help others:

Portions of this blog were excerpted from UNSTOPPABLE: Transforming Sickness and Struggle into Triumph, Empowerment, and a Celebration of Community by Zen Honeycutt.