Concerned, we asked the FDA:

Response:
Thank you for writing! FDA does not have a list of genetically modified foods on the market. FDA relies on scientific fact to make food safety determinations. Companies wishing to market a GE food provide a Biotechnology Notice to FDA to demonstrate that the GE food is considered safe.

Generally, GE foods may contain proteins that occur naturally in a different plant. By using genetic engineering techniques, a protein new to a plant can be expressed. Such proteins may change the nutritional composition of a food, such as causing soybeans to favor the formation of healthier oils, as in Biotechnology Notice 000164. As you can see, FDA evaluates the safety of the GE soybeans and determines that no toxicants are present.

We think Bayer (which purchased Monsanto), Dow/DuPont and ChemChina (Syngenta) couldn’t have written a better response themselves....unless of course they did write it.
Numerous positions at the FDA have been filled by former GMO industry executives....and numerous GMO industry positions have been filled by former FDA executives. Clearly this is a conflict of interest...and not in the best interest of the American people. 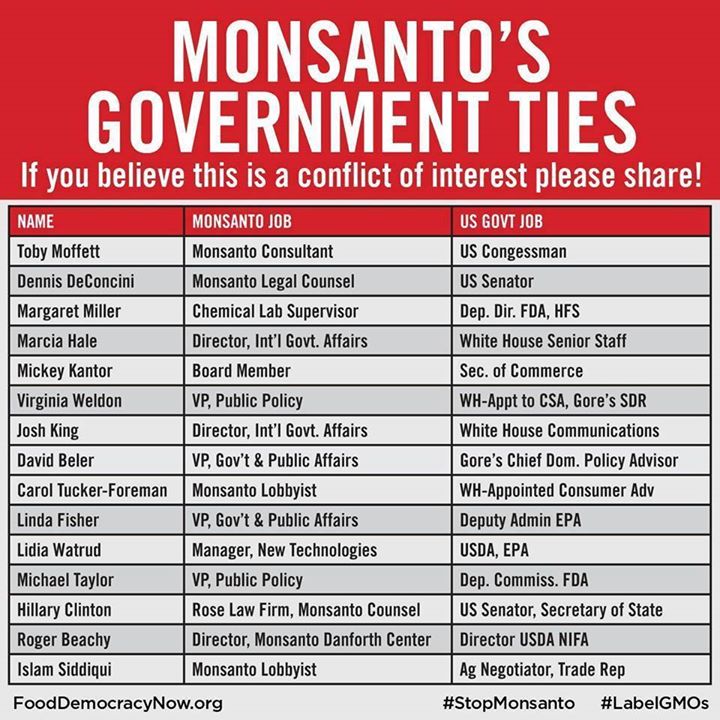 Why is the response from the FDA that they “do not have a list of genetically modified foods on the market” unacceptable?

The next two sentences of their response explain exactly why. “FDA relies on scientific fact to make food safety determinations. Companies wishing to market a GE food provide a Biotechnology Notice to FDA to demonstrate that the GE food is considered safe.”

In other words, the FDA regulates our food for safety by relying on the “scientific facts” from corporations which stand to profit from their products. These companies are obligated by law to make a profit for their shareholders (not to create safe products) and can merely send the FDA a “notice” that their products are “safe.” These “scientific facts” are created by companies like Monsanto (now owned by Bayer) that have been caught (141 documents) ghostwriting the “science” ...meaning they wrote a “study” showing their products were “safe” and paid a university professor or scientist to sign off on the “study.” Those studies were then used by our regulatory agencies in the approval process..and those products, like Monsanto’s Roundup and hundreds of other glyphosate-based herbicides, sprayed directly on our food...are still on the market. These glyphosate-based herbicides have been found to cause cancer, neurotoxicity, cause reproductive organ harm, liver and kidney disease, birth defects, and more. And the FDA simply ignores these scientific facts because they have other “studies” that they have been provided by the industry to show that these chemicals are “safe.”

Our founding fathers did not fight for our nation to be free for this form of government...one where the corporations tell our regulators and people what is safe. 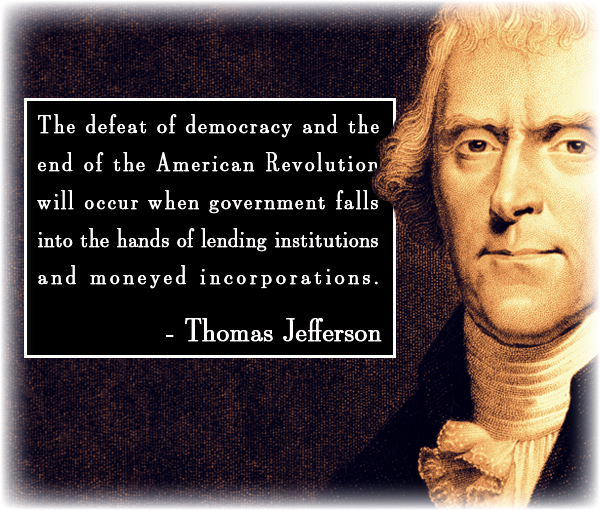 As stated in The Nation about Thomas Jefferson, “In the early years of the 19th century, as banks and corporations began to flex their political muscles, he announced that: “I hope we shall crush… in its birth the aristocracy of our moneyed corporations, which dare already to challenge our government to a trial of strength and bid defiance to the laws of our country.”
We are at a point in time when corporations are not only defying the laws of our country, they are rewriting them.

The regulatory laws we do have, for instance, on the FDA’s page titled “Guidance for Industry: Voluntary Labeling Indicating Whether Foods Have or Have Not Been Derived from Genetically Engineered Plants” states,“The use of the word should in agency guidances means that something is suggested or recommended, but not required.”

Our country has become a country where the profits of corporations dictate not only the safety of our products but the freedom to know where those products are...the freedom to consume those products or not....the freedom of health and justice. We no longer have bodily autonomy if we cannot choose whether to eat GMOs or not, to consume foreign proteins that have been scientifically proven (yes, the real scientific facts) to cause thousands of off-target mutations. Gene-edited GMOs have even caused ON-target mutations. 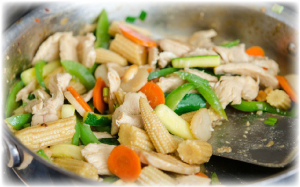 Are you interested in feeding your family mushrooms, corn, chicken and vegetables cooked up in gene-edited soy oil that has thousands of genetic mutations? That’s exactly what could be happening tonight in your kitchen, and our government does not want you to know.

To tell the FDA you want to know what is in your food , you want a list of current and pending GMOs and gene-edited or gene-drive derived food products in our food supply, contact [email protected] and refer to case number 217550.

Moms Across America is a 501c3 nonprofit whose mission is to educate and empower mother and other with actions and solutions to create healthy communities. Find out more about GMOs at www.momsacrossamerica.org/data.