A new study, by senior study author Ramnik Xavier of the Broad Institute of MIT and Harvard on the maternal human microbiome, provides support for what we have been saying for a decade; "Pregnant mothers need to eat organic food!"

Researchers have discovered a new mode of vertical mother-to-infant microbiome transmission, where microbes in the maternal gut shared genes with microbes in the infant gut during the perinatal period starting immediately before birth and extending through the first few weeks after birth. This horizontal gene transfer allowed maternal microbial strains to influence the functional capacity of the infant microbiome, in the absence of persistent transmission of the microbial strains themselves.

Such a large-scale integrative analysis, presented December 22 in the journal Cell, provides a series of high-resolution snapshots of gut colonization dynamics that influence infant development both before and after birth.

"This is the first study to describe the transfer of mobile genetic elements between maternal and infant microbiomes," says senior study author Ramnik Xavier of the Broad Institute of MIT and Harvard. "Our study also, for the first time, integrated gut microbiome and metabolomic profiles from both mothers and infants and discovered links between gut metabolites, bacteria and breastmilk substrates. This investigation represents a unique perspective into the co-development of infant gut microbiomes and metabolomes under the influence of known maternal and dietary factors."

Gut bacteria promote the maturation of the immune system in part through the production of microbial metabolites. The development of the infant gut microbiome follows predictable patterns, starting with transmission of microbes from the mother at birth. In addition to immune system maturation, microbial metabolites also influence early cognitive development.

The perinatal period represents a critical window for cognitive and immune system development, promoted by maternal and infant gut microbiota and their metabolites. Nevertheless, the co-development of microbiomes and metabolomes during the perinatal period and the determinants of this process are not well understood. 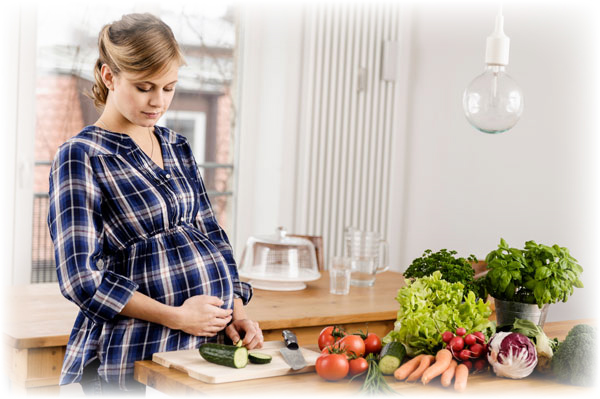 What a pregnant mother eats is CRUCIAL.

Protecting the gut microbiome of the pregnant mother is one of the most important things our society, families, and the mother can do.

Clearly, if the mother is eating the toxic standard American diet, with residues of glyphosate herbicide, which has been shown to destroy beneficial gut bacteria, the genes transferred, health, and development of the baby could be severely impacted. Hundreds of different toxic chemicals have been found in our conventional food supply, chemicals that cause cancer, birth defects, thyroid, reproductive, and heart issues. And yet too often family members think it is a "treat" to bring apregnany mother a non- organic loaf of pumpkin bread, icecream, or chips. Frankly, these gifts are not a treat - they are a threat to the mother's and baby's well being.

In fact a study from Heart Health Research Alliance shows that if a person just changed their fruit and vegetables to organic, they would eliminate 98% of their consumption of toxic pesticides (not including glyphosate). Further testing has shown that avoiding non organic oats, wheat, and other grains, garbanzo beans and other beans and legumes, are the most important to avoid glyphosate.

So if you have a pregnant mother in your family - the BEST gift you can give her - besides an offer to clean the house and let her put her feet up - is a gift of organic food, ideally whole fruits and vegetables. Please support pregnant women to eat organic for the health, development, and safety of the new baby coming into your lives!