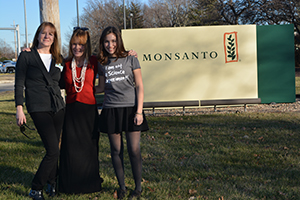 It is the morning after the Monsanto Shareholder Meeting on January 29, 2016. Thinking back on what happened, I have to be honest, I was SO NERVOUS. Let's just get that out of the way, right off the bat. I was stepping in for Zen, for crying out loud. I have watched this woman speak and she is so good at what she does, and I knew I had some really big shoes to fill.

Thanks to John Harrington of Harrington Investments, I was also going to be standing in front of the CEO of the most hated corporation on the planet. Hello. But I was in great company. Beth Savitt of the SHAKA Movement from Maui, representing As You Sow, and Rachel Parent of Kids Right to Know from Canada, representing a contact through Moms Across America and Food Integrity Now, three generations of international advocates would be there with me. There IS strength in numbers. Had I been alone, I felt  I might have crumbled under the enormity of the task before me. When we arrived, three security cars pulled along side our vehicle. I thought it was a bit overkill. We walked in unity into the Monsanto building, tensions high but feeling supported and strong. We were assigned our "handlers" as soon as we checked in and were offered refreshments.

When we sat down in the shareholder meeting, with about 100 other people, I saw CEO Hugh Grant and his shiny head at the front of the room. There he is. Him. Darth Vader with a Scotish brogue. Smiling and schmoozing and greeting everyone. Someone pointed to us and he looks over and shakes his head and starts heading our way. Oh yay. Now I get to shake hands with the man who represents EVERYTHING we HATE and are fighting against. But I remembered Zen talking about this last year, and I said to her "Of course you had to shake his hand. You were there to SPEAK, not get thrown out for bad behavior". So he came over and introduced himself and I made sure to look him right in the eye with steely resolve (You don't scare me buddy, I am here to TAKE YOU DOWN), and then he introduced himself to Beth who proceeded to give him a lei and a full blown Hawaiian greeting, with side kisses and then forehead to nose. And she then says "Mr. Grant, you HAVE to look me right in the eye for a proper greeting and he said " I know." Beth said "He was avoiding eye contact anyway." This was happening right in front of my chair and I felt nervous giggles about to erupt from me, but I managed to hold it in. Beth Savitt -- You are one bad ass! You brought "Aloha" from Hawaii to Monsanto.  He went over to meet Rachel, who completely holds her own any where she goes, and then the meeting started.

We got to watch this propaganda video about how great Monsanto is, how precise they have made farming (no mention of drift here), how they were going to be THE company to save the world. I think they really believe it.  Beth, Rachel and I were looking at each other in mutual understanding of the quagmire of untruths that were being told.

Much boring discussion and many tales of how wonderful their products are happened. Then Hugh said we would be getting down to official business and mentioned that most of the votes on the items on the agenda were already cast. There were a few people that raised their hands and were given paper ballots to vote on in the meeting. EXCUSE ME? I mistakenly thought that we were going to be speaking to these issues and then the votes would be cast. It was then that I realized we were probably not going to win on our proposal written up by Harrington Investments compelling Monsanto to report to shareholders how they were going to mitigate the risks from the inevitable losses from the public's exposure to Roundup.I saw that this is just another way for corporations to influence and control the shareholders votes.  He spoke about the election of the board members and some innocuous agenda items and then he got to me. Holy Moly -- here I go. Can I do this? He said my name and I walked up to the microphone.

I am not sure why, but when I start talking into a microphone -- well I just LOVED it. Maybe it's because people HAVE to listen to what I say. Maybe it's because I have a big mouth and now this mic gives me a big mouth on steroids. I started talking and the nerves went away. I think I did a good job. I said all the words. I meant every one of them. The first paragraph had two words "mitigate inevitable" in it and the first few times I practiced it I couldn't say it.  I must have said those words a thousand times.  They were not going to trip me up!   I don't remember much except there were a lot of eyes on me, and I knew a lot of them were hateful "how dare you speak badly about my beloved company" eyes. To listen to the Monsanto shareholder meeting click here.

Major points discussed during the meeting: lack of transparency in lobbying, conflict with the CEO also being the Chairman of the Board, lack of safety testing, misuse of Roundup, lack of labeling, and the knowledge that Roundup/glyphosate has cancer causing qualities since 1983.

If Monsanto does not address these points, they can expect to have to close more offices and lay off more workers. I simply do not see how they can ignore the risks associated with Roundup. After I finished I sat down and of course Hugh stated why they should NOT vote for this proposal, because there was no need to because after all, glyphosate is completely harmless, and was going to be THE TOOL to feed the growing population AND --- AND it was going to help fix CLIMATE CHANGE.

ARE YOU KIDDING ME?

I wanted to get out of my seat right then and there and start screaming about what a complete bunch of CRAP that was.  I was literally having a hard time sitting in my chair.  But I would have two more times to speak, so I would wait my turn.  I didn't want to be ejected from the meeting.

Beth spoke very eloquently on behalf of transparency in lobbying and Lisa Lindsley, who also attended from Sum of Us spoke, made a lot of sense when she said that the CEO of Monsanto should not also be the Chairman of the board. Then the results were announced.

Our proposals did not pass but we exceeded what we needed. We hoped for 3%, as that would keep the issues on the docket for next year. My proposal got 5.3% and Beth's for transparency in lobbying got 20.8%. Lisa's proposal for an independent chair got 14.8%. For those of you who might think we are happy to take paltry scraps of votes, we are not. One must also understand however, that the majority of votes are owned by the directors and major investment firms like Vanguard. Without their votes, who represent the bulk of the shares, nothing gets passed. This is just another way that corporations maintain control. This is why seasoned shareholder activists know that anything over 5% is significant and is considered a win. This is because we are being heard and are making a difference with the individual shareholders.

Rachel got up and spoke during the Q&A at the end.  What a dynamic young woman she is!  We need a lot more young people like her.  She talked about the fact that she has been working towards getting our food labeled, so we all can make the choice as to whether we want buy foods containing GMOs.  She has been working for this since she was 11.  ELEVEN.  Not your typical kid for sure.  How many 11 year-olds do you know with a social consciousness and a moral compass facing true north.  I don't know many.  As I said, we need more of her.

Here is just one part of what she said," If you truly believe your GM technology is safe, if you truly believe it has the potential to feed the world, why are you treating it like a dirty little secret that can't be shown on food labels? Why, if it's such proven technology, are you fighting it, rather than PROMOTING it?"- Rachel Parent 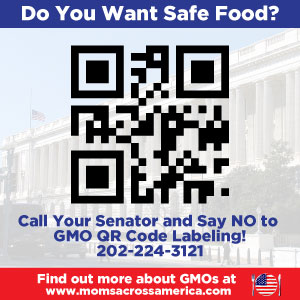 After she spoke, Hugh got up and said that our wonderful government is trying to do JUST THAT!  Isn't is wonderful?  And up on the screen he showed a picture of the new label and how it was going to show EVERYTHING in the food product.  Isn't it MARVELOUS?  Well, what he wasn't showing was the fact that to get to all this information all you would see on the food label was a QR code.

Now my blood was BOILING.

Zen had given me some great talking points to speak to, but I was going to have to speak to this.  So I got up and told everyone how discriminatory this so-called QR code solution to our demand to know what is in our food.  How many people don't have smart phones with the app installed to read these codes?  And how many busy Moms (who do 85% of the food purchasing) have the TIME to load the app and scan everything in the store?  RIDICULOUS.  When I had kids living at home there were times when I was literally running through the stores and flinging items into the cart so I could get home and throw together a meal (that I THOUGHT was safe) for my family.  This is NOT a solution. It is a cover up. So, with that said, call the number on the image to the left and let your senator know that this is NOT solution and putting a one line "This food contains genetically modified ingredients" will be a better solution.  What we really want is a BAN.  No. Let me rephrase that so that everyone can understand what we want (you know who you are).  We want the production of glyphosate STOPPED.  We don't want it used for ANY purpose.

It was originally developed by the Stauffer chemical company to clean in the inside of commercial boilers in the 60's.  Monsanto bought the molecule from them in 1964 when they discovered that the waste water from cleaning these boilers killed everything it touched.  We don't even want it used on our food or in our environment for any reason  This molecule should NEVER be created again.  PERIOD.  Put some vinegar in those boilers and let it sit a while.  That's how I clean my humidifier.  Works just fine and IT DOESN'T KILL PEOPLE.

By the way, after I said that, Hugh told me that Monsanto developed glyphosate.  Sorry Hugh, you are wrong on this one AS WELL AS MOST EVERYTHING ELSE THAT CAME OUT OF YOUR MOUTH AT THE MEETING.

Well, the meeting is over.  The world is still turning and our work continues as it did before. I feel confident that we reached the most important people to hold to account, the shareholders who invest in Monsanto and the board members who decide Monsanto's direction. Thank you Zen and Moms Across America for having the faith in me that I could do this.  It has made me a better person.  So Zen, while you are thanking me for doing this for you, it is me who owe you all the thanks and love that I have."