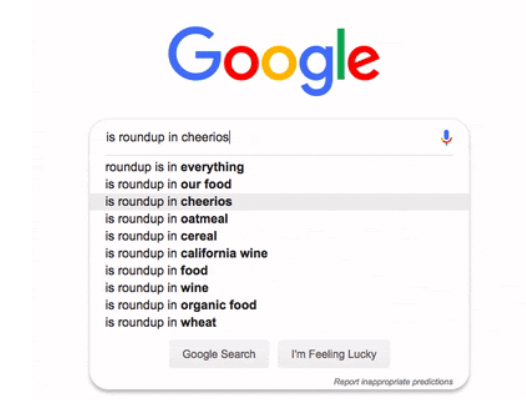 The CFIA glyphosate testing data, compiled in the book “Poisoned Foods of North America” by Tony Mitra, showed that non-organic gluten free foods and non-organic foods which largely make up vegan and vegetarian foods such as wheat, garbanzo, white and black beans were very high in glyphosate, the world’s most widely used herbicide, up to 12,699 ppb. Health conscious parents who try to feed their children organic are much more likely to feed their children gluten-free, vegan and vegetarian foods whether or not they are also organic, thus unintentionally poisoning their children with higher levels of glyphosate. This shows that health-conscious consumers who are eating gluten-free, vegan and vegetarian foods must be sure those foods are also organic in order to avoid this toxic herbicide.

However, some foods are contaminated whether they are organic or not. Particularly alarming was the finding that even organic garbanzo beans, organic chickpeas, and some organic lentils were highly contaminated with glyphosate. These foods should be avoided completely from North America if one wants to avoid consuming glyphosate herbicides.

Claims that glyphosate-based herbicides are safe are widely believed, as Roundup and other GBH brands have been used for 40 years. In the past ten years, there has been a significant increase of the use of glyphosate directly on nonorganic food as a drying agent in addition to GMO crops. Honeycutt and her organization assert this is unsafe, and a major contributing factor to the skyrocketing childhood illnesses in America today.

“Proponents of GMO and chemical farming claim glyphosate-based herbicides are safe, according to the EPA. But the EPA policy is to require safety studies on one declared active chemical ingredient, not the final formulation of the herbicide. They have admitted to not having any long-term animal studies on the final formulation of Roundup. Therefore, any claims that Roundup and glyphosate-based herbicides (GBH) are safe are completely unfounded. We call on farmers to stop using harmful chemicals on all of our food and feed crops immediately. We must reduce the toxic burden on our children and protect the future of our country, “ says Honeycutt.

UPDATE: Glyphosate found in all oat samples tested, as high as 1100 ppb of glyphosate and 40 ppb of AMPA (Glyphosate breakdown)

Moms Across America is a 501c3 nonprofit whose motto is “Empowered Moms, Healthy Kids.”