Anyone who doubts the tenacity of our food movement, is exhausted by the apparent losses we have experienced and have therefore given up almost all hope…fear not. The movement for non GMO, toxin free food, clean water, healthy soil, and fair farming practices, is alive and expanding. The Monsanto Tribunal and People’s Assembly at The Hague, Netherlands, could not have been more energetic, determined or well represented by leaders and activists from around the world. I personally met people from the Netherlands, France, Germany, Switzerland, UK, Argentina, Brazil, Puerto Rico, Africa, Australia, Paraguay, the USA, China, Philippines, and more. We began on Oct 14th at the People's Assembly in the Bazaar of Ideas building in The Hague, Netherlands, at the Student hotel, a large room, flooded with sun and excitement, The flanking rooms were filled with people roaming around tables stacked with flyers in every language and draped with banners with every combination of “Monsanto OUT” that you can imagine. 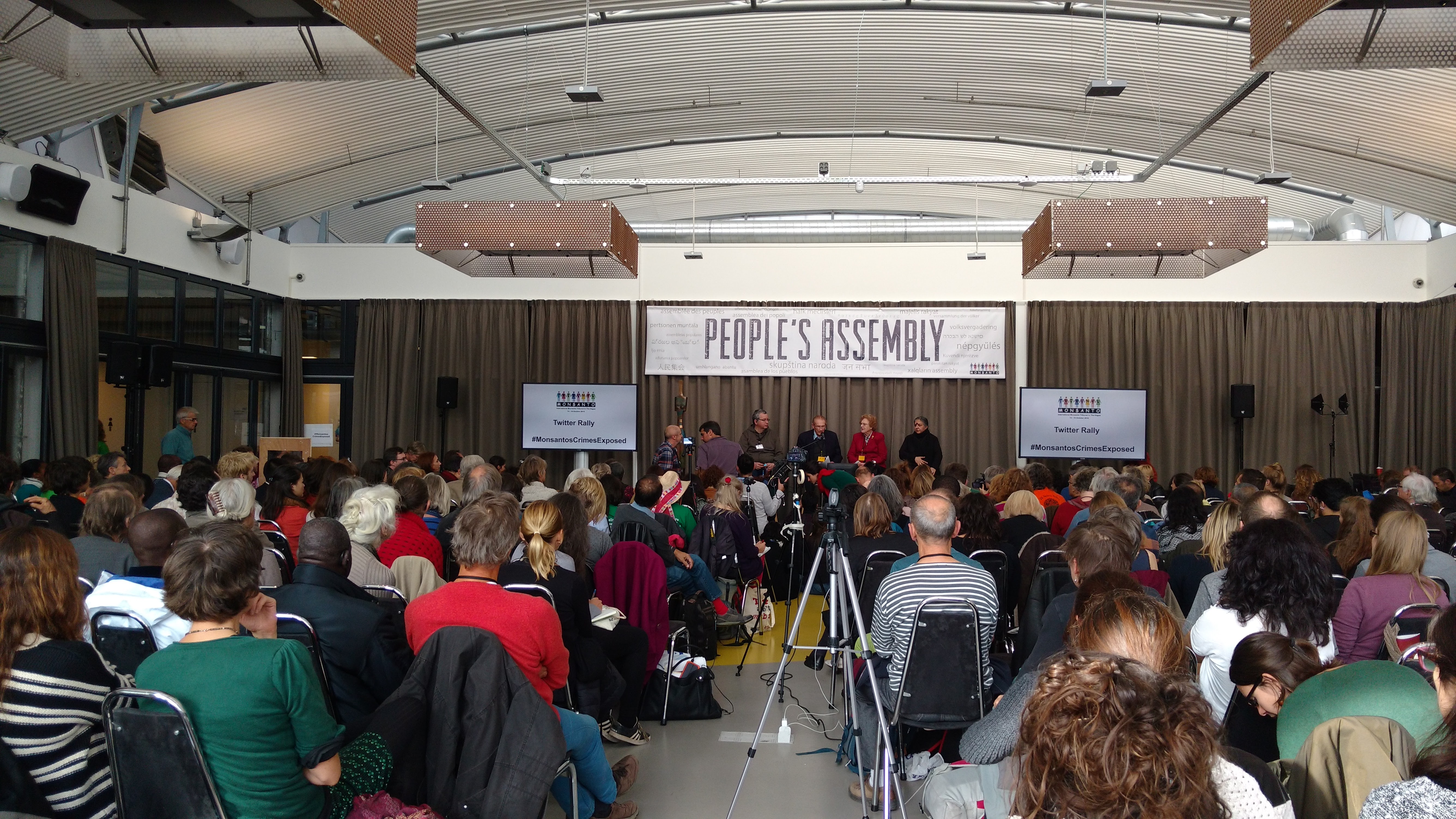 Monsanto, arguably the most hated company in the world, has a decades long history of poisoning people and the planet. Search online for DDT, Agent Orange, Aspartame, High Fructose Corn Syrup, GMOs and Glyphosate/Roundup and you will have enough material to read for years. Read about what Monsanto did to the town of Anniston, Alabama, where they produced PCBs and almost destroyed the town.

The Monsanto Tribunal, organized by Navdanya, Organic Consumers Association, IFOAM, Marie-Monique Robin, and more, was a people’s tribunal with international judges who will deliver a verdict which will likely influence forthcoming legal judgments. The intention is to create a new criminal term, called “Ecocide” which would make it illegal to poison people and the planet with toxins.

We are long overdue for such a criminal category. According to Will Allen's "War on Bugs", since the 1890’s farmers and factories have been using toxins which have been poisoning our soil, water and air. The past two decades have seen a huge increase in the use of toxins. 2/3 of all the glyphosate ever produced has been used in the last 10 years. According to the journal Environmental Sciences Europe, 9.4 million tons worldwide of glyphosate based herbicides have been used on our soil, town road sides, parks, playgrounds, school yards, and food. Glyphosate, the declared “active” chemical ingredient in Roundup, is a chelator (makes vital nutrients and minerals unavailable), an antibiotic (weakening the immune system) a reproductive effector (leading to miscarriages and birth defects), causes kidney and liver damage (28,000 have died in Sri Lanka who came in contact with Glyphosate based herbicides or GBH) and has been linked to cancer (nearly 1000 plaintiffs have filed against Monsanto for the link to non Hodgkin’s Lymphoma.) Glyphosate has been discovered, by Seralini's team in France, however to be one of the least toxic of the 50-100 chemicals in the chemical mixture "Roundup". The other formulants are 1000-100,000 X more toxic. These same chemicals are not required to have safety studies, and the EPA admitted directly to me that they have NO long term safety studies for the final formulation of Roundup. Hence, the worldwide claim that Roundup and the 700 other glyphosate based herbicides are safe is completely unfounded. 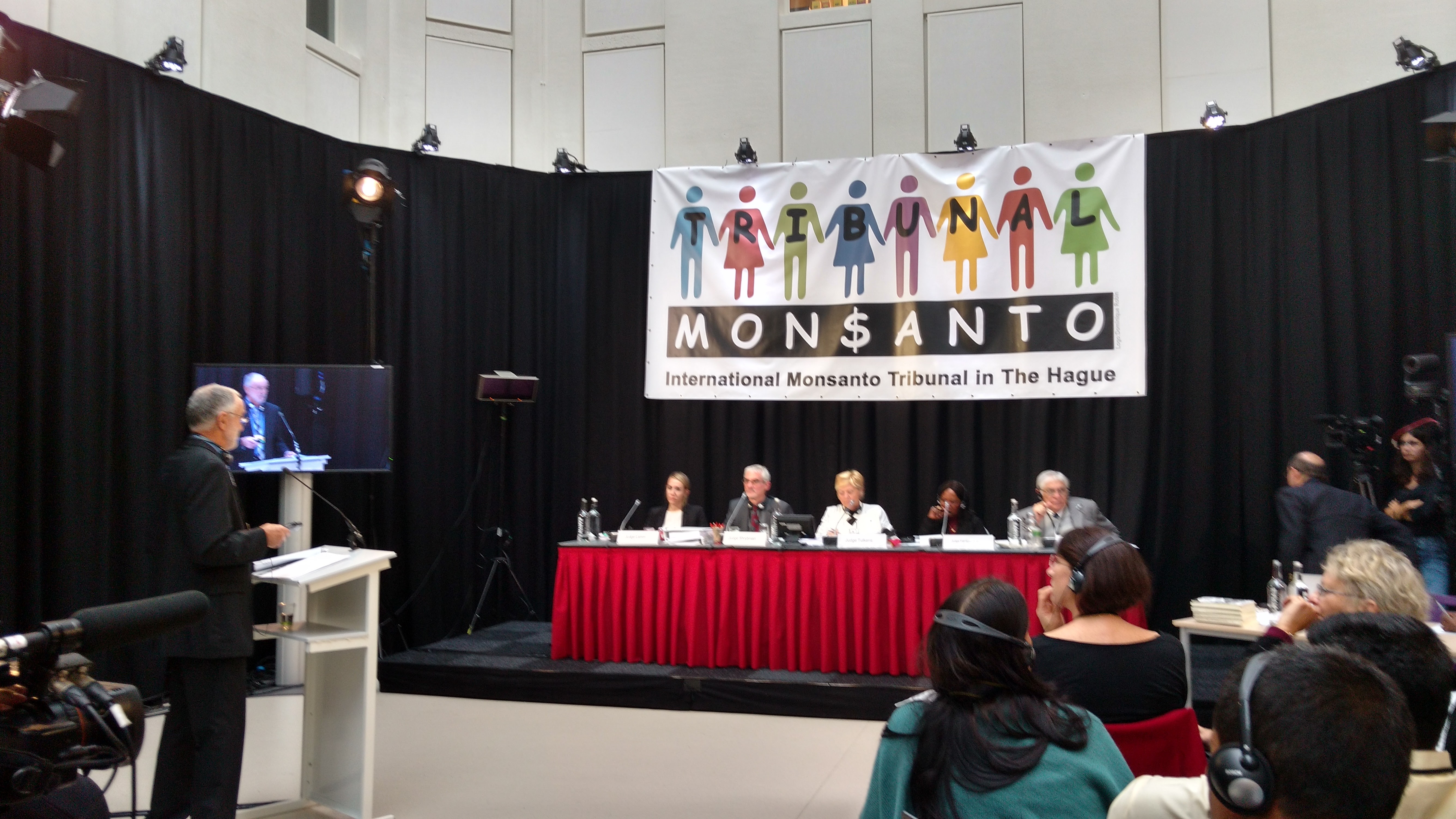 On October 15-16th, 2016, the Monsanto Tribunal brought the people and experts together who have experienced harm from or have researched the impact of glyphosate based herbicides made primarily by Monsanto. The testimonies were deeply disturbing and tragic.

The first two testimonies were by mothers who had used Roundup during their pregnancies and had babies with malformations. They learned that at the particular time of their gestation and their exposure to Roundup was the same time as the bodily function of their child that was deformed. Glyphosate is acknowledged by the EPA as a “reproductive effector.” One mother stated that her son was about to undergo his 51st surgery.  The mothers did not cry or lash out angrily as they would be justified to do so, but tears did well in my eyes, because I know the love of a mother and how much all we want for our children is for them to be healthy, happy and live productive, meaningful lives. These children have been robbed of that future. Their health and their futures have been compromised by the toxic chemicals their mothers were exposed to. This means our country, our planet has been robbed, for who knows what these children would have invented or contributed to our society? Think of Google - created by two boys.

The next testimony was by a woman who developed non Hodgkin’s Lymphoma after spraying Roundup, as directed, on her coffee farm in Kona, Hawaii. She lost almost everything, her good health, her farm, her livelihood, and freedom to enjoy life without pain. Her testimony of her numerous trips to the mainland for treatments and enormous cost to her family, was overwhelming. Her lawyer reported that he currently knows of 1000 cases of non Hodgkin’s Lymphoma that will be filing and he expects 5000 by the end of next year. He was confident, measured and clear.  I was grateful for their testimonies and their courage.

The next two testimonies were by two men from Sri Lanka who reported that 28,000 people have died who were exposed to GBH either through the farm or water. They directly correlated the exposure to GBH to their liver and kidney damage, which even the EPA recognizes on their fact sheet about glyphosate. 5,000 of those who died were women and children who never worked on the farms or sprayed Roundup. Exposure through water, air and physical contact with the farmers, who did not wear protective gear, is suspected. The government recognized the tremendous impact to their country and are the first country to ban glyphosate due to scientific reasons. The thunderous applause was allowed by the court at the end of their testimony. 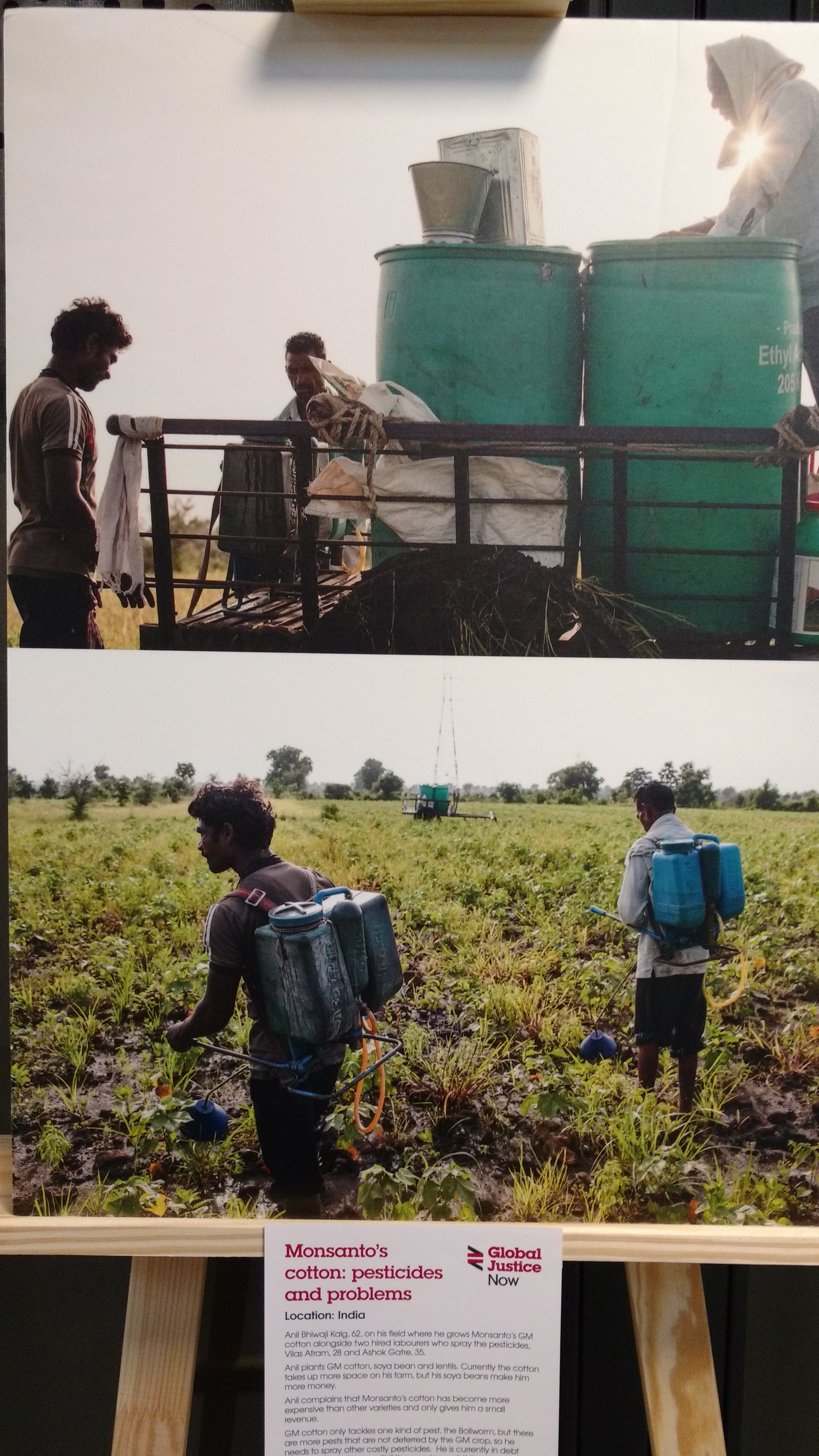 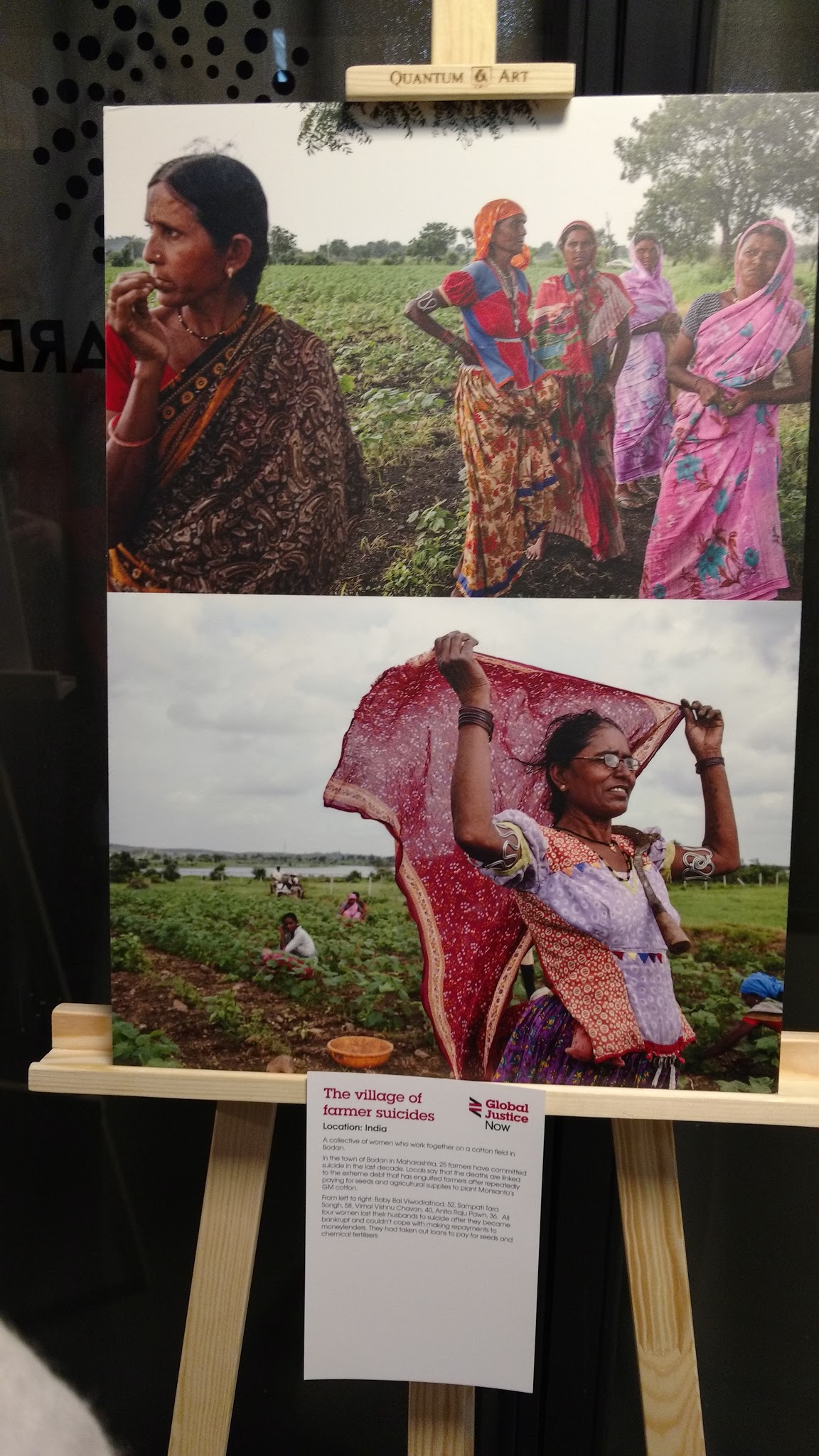 Many more testimonies, 30 in all,  regarding health impact to animals, soil, farms and society were heard by the judges over the next 48 hours. The judges asked thoughtful and challenging questions. The evidence was overwhelming. Although invited, Monsanto declined to attend and therefore will claim that the verdict will be one sided. They chose to make and sell the products, and they continue to chose to ignore the thousands of reports of harm from their products. Ignoring something does not make one less responsible. It only makes one responsible for more harm that is occurring as they continue to allow harm to happen through the sale and use of their products. 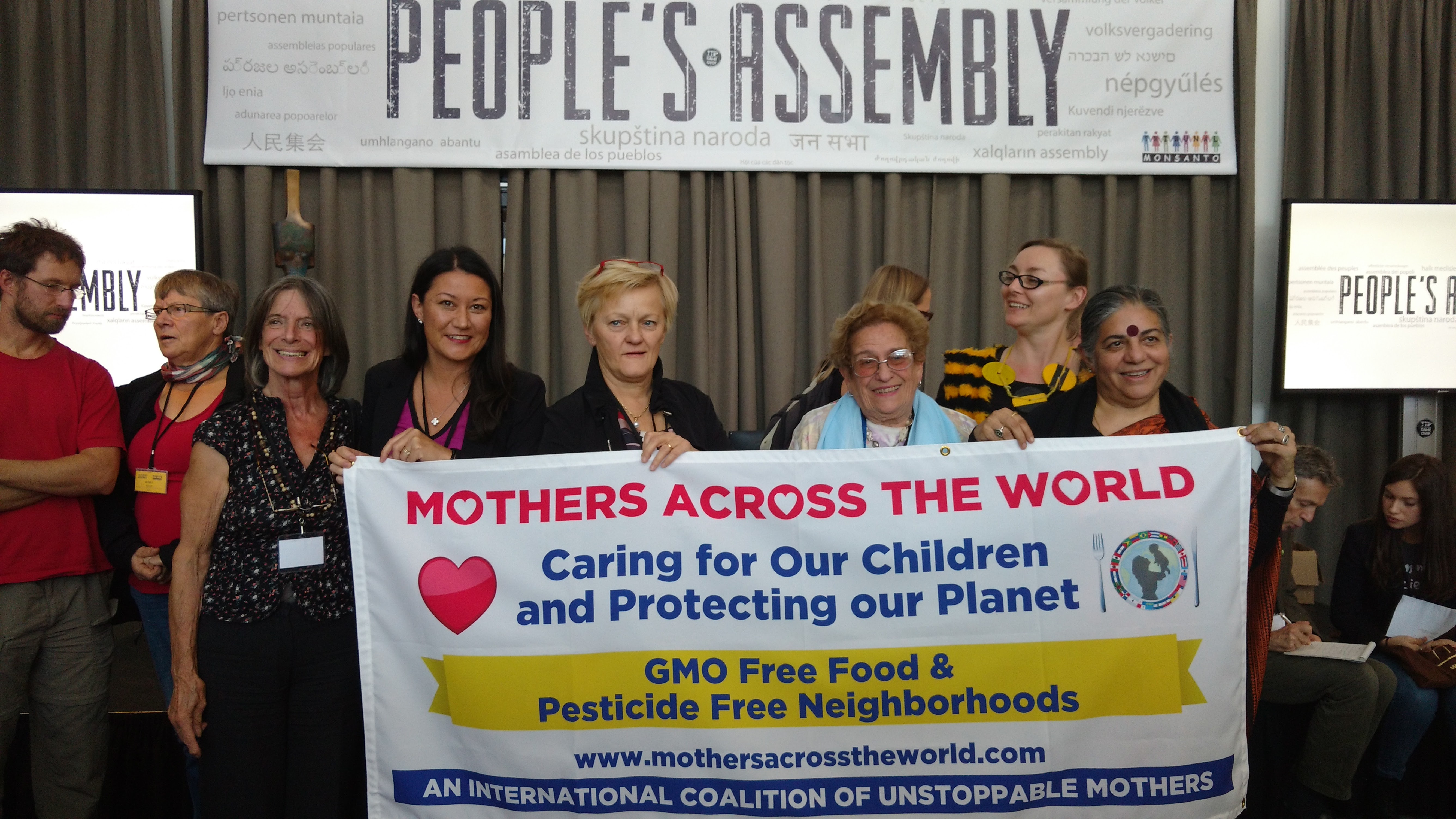 600 people also gathered for the People’s Assembly held consecutively at a different location, where leaders and activists of 30 countries and global groups brainstormed, planned, sang and danced together well into the night. The opportunity to connect with people from all over the world who feel as passionately as we do about stopping the harm from Monsanto and other big chemical companies, was rejuvenating.

Global citizens came together in The Hague in a very impactful way. It is the beginning of a new stand for accountability. Millions around the world are calling for this Chemical Era to end and for the corporations to stop poisoning us. I have faith we will prevail because we, especially we mothers, make 85-90% of the household purchases. The chemical companies only have the power they have because we give them our money. If we don’t buy toxic products and GMO chemically farmed food, they can’t sell them, and they will have to stop poisoning the planet.

We the people have the power, and it is only a matter of time before we all realize this. I just hope it is sooner rather than later.

-Zen Honeycutt
Moms Across America and Mothers Across the World

The verdict by the Monsanto Tribunal expected in April around Earth Day. The judges have an enormous amount of evidence to review, including data from the USA, and over 500 testimonials sent in by supporters like you.

From the Monsanto Tribunal Press Release:

Bart Staes, Member EU Parliament from the Green Party speaking to the People’s Assembly said, “We have to democratize the decision-making process, especially in the European Union parliament and we need to examine more carefully how the decisions are being made, especially when is comes to Agriculture; GMO seeds represent a huge problem for democracy; in fact the EU has under a lot of pressure to sign trade treaties that are deemed to have negative consequences on the environment and ecosystems.“

Ronnie Cummins, Founder of the Organic Consumer Association speaking on the closing day said, “ We need to globalize hope! We need to break down the walls that divide us and to express solidarity with one another. In order to survive as a species and planet, we need a transnational alliance for the Earth. We need to combine all farmers movements from India to Mexico for the survival of our planet.”

Dr Vandana Shiva, founder of Navdanya and renowned environmentalist, stated “ At this People’s Assembly, and at hundreds of others happening all over the world, people have passed their verdict. The poison cartel is guilty. They have destroyed life, plant and human health alike. They have disregarded all laws of nature and countries national legislation with the result of destroying biodiversity of our fields and our foods systems.
As part of the Planetary Alliance for Earth Democracy we shall continue to resist attempt of these poison makers to control our food, our life and democracy.

1. Crimes against biodiversity, integrity and intrinsic worth of species by defining seeds and plants as their invention. Crimes against species and biodiversity
2. Crimes against biodiversity of pollinators – 75 % bees gone in industrial ;bees endeared species
3. Crimes against the Soil – Destruction of soil fertility and desertification.
4. Crimes against farmers – With over 300,000 farmers from India along have committed suicide because of Monsanto and they have been already spoken.
5. Propaganda and Lies: Monsanto are spread pseudo-scientific propaganda and lies to misguide the public and cover up their crimes.
6. Attack on Scientists – They have aggressively attacked independent scientist like Dr Eric Seralini and Dr A Putzai et al who have stood for real science and independent research.
7. Attack on Democracy – Monsanto has repeatedly attacked national governments in India Argentina, Mexico, Brazil, etc.
8. Right to Know: They are taking way from us the right to know what goes in our food.
9. Attack on democratic institution – In countries around the world they have attacked Anti-trust bodies, judiciary and government welfare institutions.
10. Attack on biosafety and Convention on Biological diversity- Monsanto with its genetic contamination and pollution tactics have blatantly transgressed the CBD and all biosafety regulations.
11. Crimes against the Earth/ Gaia – Monsanto and the poisons cartel at the biggest the contributors to Climate change. They are putting us on the path of annihilation.