China has a double standard regarding GMOs. While their officials have a sign proudly declaring the oil in their cafeteria GMO free, the school cafeterias for the children of citizens do not. 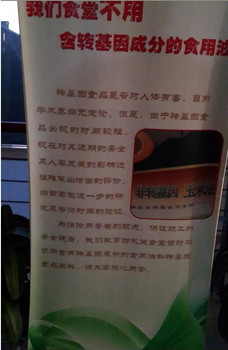 The sign in the accompanying photo hangs in the corridor of the Ministry of Education building in Beijing. It begins, “Our Canteen Does Not Use Food Containing GM Ingredients.” It further states, “The issue of whether GM food is harmful to human health is currently without consensus within academia. GM food has only appeared [in China] for a short period making it very difficult at present to appropriately assess it's impact on long-term safety. Further research and longer time is required for verification. To eliminate the concerns of diners, and to assure the safety and health of our staff members, our Ministry of Education Office Canteen temporarily will not use food oil containing GM ingredients and GM food materials. Please enjoy your food without any such concern.”

(Note: The sign contains a link to the original chinese blog
http://blog.sina.com.cn/s/blog_4bb17e9d0102ebun.html the original source of information)

The officials must be well aware of the potential GMO health implications.  But are they aware of the increased risk to children? Perhaps they don't know how, in the US, which grows many of the GMO crops China imports to process GMO soybean oil, has an EPA allowable level of 40 ppm of glyphosate? Glyphosate is sprayed on GMOs:canola, cotton, corn and soy oil, and as a drying agent on non GMO crops such as rice, wheat, corn, soy, sugar. And .10 one tenth of a part per million has been shown to destroy gut bacteria which is the strong hold of our immune system. Glyphosate has been linked to autism, allergies, auto immune, asthma, diabetes, obesity, ADHD, alzheimers and depression...all health issues which are skyrocketing in America's children? Or do they? Is that why they themselves are avoiding them?

Moms Across America has hundreds of testimonials from Moms whose children are getting better by going GMO/Glyphosate free. We wish the parents of China to know this too. We wish the officials in China would understand the possible jeopardy they put their country in by allowing GMO/glyphosate into their school cafeterias.

Our country serves our children 31 million GMO meals in schools per day. It must be hundreds of millions more in China. 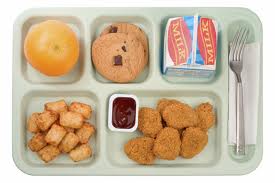 Every food item above most likely contains GMOs and/or glyphosate at levels thousands of time higher than shown to damage animals. Want proof? Ask the FDA to produce tests and results.

And here is a chart of the allowable levels of glyphosate permitted on our food crops:

"Our school in Arkansas has 170 out of our 600 children in Special Ed and this does not include the children with autism who are in the regular classrooms. 50% of all our students have either asthma or allergies. They are ALL eating these GMO meals and for many of them they are the only food they get because we are in a low income area, and they are always hungry. The food does not have enough nutritional value and they are being devastated, I believe, because it is GMO and chemicals. Our children are being devastated. This has to stop."

Here is what our Moms are saying.

but from mother to parent-official, we ask you to reconsider rejecting all GMO crops. We understand, due to supply, it will need to be a slow process, but PLEASE start with your schools. We do not want to see the children of China end up like the children of America. 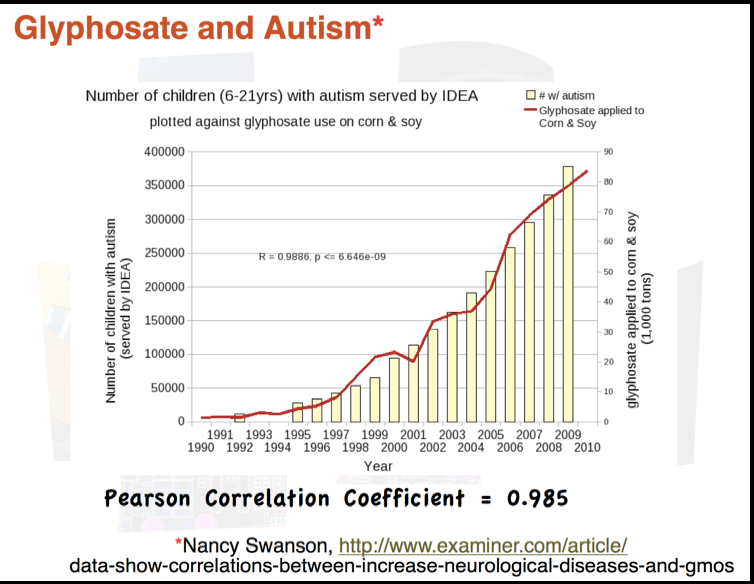 1 out of 2 children are projected to have Autism in the next 20 years or sooner. This cannot happen. What will our country be like? What would our society, military, job force and economy be like? Who will take care of aging parents or bear children and continue the success of our countries?

For the officials who would like more scientific data here is a study on how glyphosate contributed to the over growth of deadly bacteria by destroying the benficial gut bacteria at lavels far below what is allowed in our food crops.

We urge all countries to stop allowing GMO oils, food, crops and animal feed in their country, but particularly China, as you import so much GM food to feed soo many. You have the largest influence on the GM industry. Please hear the cries of American mother who, since the introduction of GMOs and glyphosate in our food supply 20 years ago,  are dealing with gut dysbiosis in their children at extraodinarialy high levels, resulting in autism, auto immune disorders, allergies, IBS, Chrohn's disease, and contributing to asthma, depression, bi polar, acts of violence, obesity, diabetes and possibly the rise in childhood cancers.

No long term studies have been show to prove that GMOs and glyphosate, which are in 85% of our processed food, are not responsible for the USA being LAST on the list of the 17 most developed countries for health.

NO studies have been done to prove that GMOs and Glyphosate are not responsible for the devastating decline of our children's health.

We believe GMOs and Glyphosate are compromising an entire generation of our children, because we see the results everyday.

Millions of mothers, 1 out of 50, struggle everyday with children who cannot control their behavior in public or at home, who act violently towards family members, smear feces on the walls, inappropriate sexual tendencies, uncontrollable tics and movements, cannot control their urination even as teenagers. Children who showed no health issues at all and then all of a sudden did not speak, make eye contact or whose performance in school suddenly plummeted. Our children are being compromised by autism. They are suffering from a myriad of health issues. There is a silent epidemic happening in America. 1 out of 2 of our children now have some form of chronic illness in America. We ask, as mothers, for you, parents, officials in China and in countries around the world,  to protect your children of our human race.