CDC Decides Who Gets The COVID Vaccine First - Moms Across America 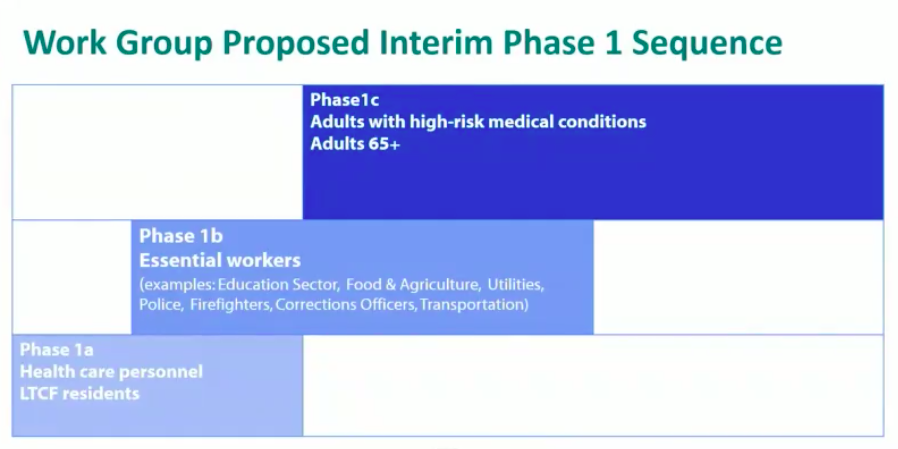 Right from the get-go the question was asked by a peer if the CDC had information on the efficacy of the vaccine. The response from Dr. Kathleen Dooling CDC/NIHD was, “We do not have data on the efficacy at this time. That is something we will address in Stage 3.” This is shocking...because this means the vaccine will be administered in Stage 1a without data on efficacy. Why? Because the government agrees with making the people in Stage 1-3 the experimental groups. No one on the panel seemed to be bothered by this information.

What About the Side Effects?

Presentations were given on how they proposed the vaccine to be administered, and for the first time, in my experience, acknowledgments were made of widespread “reactogenicity” (expected side effects) and how they should be managed. Keep in mind, the reactogenicity they were alluding to were just fever and flu like symptoms for a day or two, enough to keep them out of work, but no admission of vaccine damage paralysis, transverse myelitis, or possible death as has been reported from the trials. 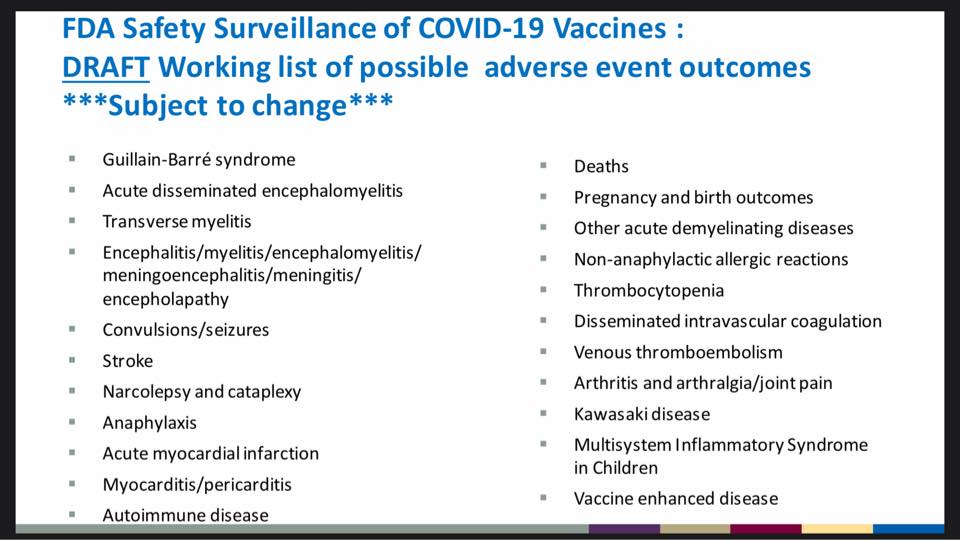 The reason these side effects are on the watch list is because these are side effects that have been widely reported from other vaccines.The COVID safety trials have been expedited and are based on the results of other vaccines. The full presentation for their protocol has been made unavailable to the general public except by request.

One CDC member said, “If we have a mass vaccination of EMT workers, for instance, we could have a shortage of EMTs the next day.” It was suggested, therefore, that rather than going into a long-term care facility and vaccinating everyone at once, staff and residents easily in three days as was previously suggested, instead they should stagger the vaccinations of the health case workers to prevent shortage of staff. Nothing was suggested about staggering the vaccination of the residents. It was determined that health care providers should attempt to get the vaccine before their day off work, therefore limiting the impact of any reactogenicity. 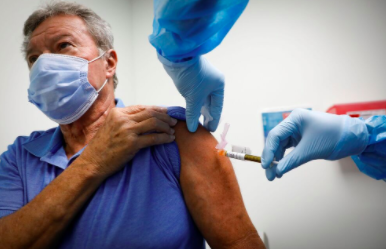 Two or three present in the meeting, specifically Dr. Talbot, expressed grave concern regarding the residents, usually vulnerable and frail elderly, getting the vaccine because their population group was not included in the trial. Another suggested that perhaps just the health care workers get the vaccine initially, and not the residents. His reasoning was that since visitors (who might bring the virus) have already been restricted, then the health care staff would be the only avenue for transmission. Vaccinating them should be sufficient in preventing transmission. Seemed reasonable (if the vaccine worked, that is), but no one agreed and no changes to the proposed policy were made. Another countered that idea and said it would be more “efficient” and “more equitable” to include the long-term care facility residents in the initial offering, as they have been the most susceptible to death from the virus. The reasoning is that it is fairer and just to give them first dibs....even though the trials did not include them and it has not been proven safe for them.

I was glad to hear that the vaccine would be made available to “those who wish to get it” and the word mandatory was not suggested by the CDC. (This does not mean that private facilities may or may not require the vaccine for employment or residency, this is unclear.) The residents in the long-term care facilities, over the age of 16 only, would need to sign a consent (give permission) form or a family member would need to assent (agree to another person’s decision) and sign the form. I immediately envisioned a sister and a brother with conflicting opinions about the vaccine being at odds with each other. This COVID vaccine issue could tear families apart. How sad it will be for many who simply want their parents to be safe and yet have been given false information.

The issue of what a long-term care facility means was discussed, as one speaker said it could include prison facilities where medical care was given (isn’t that all of them?) and another expressed concern about that. Another CDC speaker re-addressed the definition as “a skilled nursing or assisted living facility where residents are unable to care for themselves”...therefore seemingly but not unequivocally ruling out prison facilities or homeless shelters. Again, unclear.

VAERS will Save the Day

Dr. Tom Shimabukuro (CDC/NCEZID) gave a presentation on the Vaccine Adverse Event Reporting System, or as he referred to it as VAERS, the “Post-authorization safety monitoring update” and the “nation’s early warning system for vaccine safety.” This euphemism compelled me to shout at my laptop, “WHAT? This system is not about safety...it’s about vaccine DAMAGE, harm!” Along with a few other choice words. People wonder why so many of us in this health freedom movement are so angry about vaccines. We’re angry because the medical industry so often uses euphemisms to mislead the American public, encouraging them to subject their precious children and elderly parents to risky injections so often...that we lose our cool. I am not proud of it, but I would hope the reader would understand. When an “anti-vaxxer,” or as I prefer to call them “health freedom advocate,” is angry, it is because we are fed up with the lack of integrity in our system. We know we can do better, we need them to do better...the safety and future of our country depends on them doing better.

For instance, Dr. Shimabukuro extolled the virtues of VAERS, claiming it would be updated with “signals” (reports of vaccine damage) and new data every 1-2 weeks, and that the delay was really only because of the length of a hospital stay and the check-out procedures. I personally know a mother who has reported severe adverse reactions to vaccines to VAERS and who repeatedly searched the VAERS database to see if their case has been received. Four years later, after repeated filings, there still was no sign of their filing. She is not the only one. The system is far from accurate, and most caregivers, including my own elderly father’s nurse at a long-term care rehab facility, have no idea that VAERS even exists. To expect the nation’s health care providers, who are dealing with staff shortages and possibly multiple cases of vaccine reactions, to suddenly buckle down and spend hours filling out paperwork is unrealistic. Not to mention that most would see the filing of the paperwork as something that might threaten their position - no one wants to report that a patient was injured at their hand or in their facility. My projection, and this is just from a layman who experienced vaccine damage with her own father (and his doctor, nurse, and rehab facility never reported it), is that the VAERS system is vastly underutilized (less than 1% actually report vaccine damage) and will continue to be COVID or no COVID vaccine. 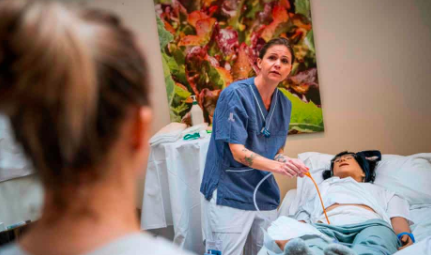 Finally, after public comments, where the expected concerns and support was expressed, the vote was put forth. Although several expressed concern over including the elderly long-term care residents, just by expressing the concern, they seemed to be talking themselves into voting “yes” anyway. 13 voted “yes.”  Dr. Talbot was the only one of 14 members to vote “no.”

Anyone with a parent or family member in a long-term care facility should be alerted. They are first. They are the experiment.

What was most disturbing was that no discussion of alternate groups to receive the vaccine first was put forward. What would make the most sense to me, and many others weighing in, would be the following order to receive the vaccine:CEO's of Vaccine Manufacturing companies and their staff