Should toxic pesticides and herbicides be sprayed near schools? These chemicals are PROVEN neurotoxins and we say NO! 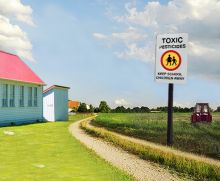 Moms Across America works to eliminate exposure to toxins completely, we do not want toxic chemicals sprayed anywhere, at any time. But the bare minimum would be to stop spraying around schools. At the very least we should be able to trust that our children are safe from neurotoxins at school and in the playground!

EWG explains the close proximity to thousands of schools and fields sprayed with toxins in this article:  click here.

The following is a letter that we ask you to copy, personalize and mail before Nov 17.

We appreciate the critical work of PANNA- Pesticide Action Network North America, and for initiating this campaign.

Together we can make a difference!

RE: Draft regulations for pesticide use near schools

Moms Across America is ( I am) extremely concerned that DPR’s draft regulations for pesticide use near schools and daycares do not adequately protect school children or staff from the health threats of highly hazardous drift prone pesticide applications, because the proposed buffer zones are far too small and apply for only a part of the day.  The buffer zones need to be in place 24 hours per day and be at least one-mile wide.  Additionally, counties must retain full authority to adopt stricter requirements based on local conditions.

As a (parent, teacher, representative of organization, etc)I/we have serious concerns about heavy agricultural pesticide use near local schools (add personal example if possible). I/we urge DPR to move swiftly to improve the draft policy to provide comprehensive protections for school children and staff from hazardous and volatile pesticides.

Add short description of the organization you represent/your personal story if applicable.

I am/ We are particularly concerned about the disproportionate exposure of Latino school children, a fact documented by the Department of Public Health (DPH) report released in 2014. Latino children are almost twice as likely as white children to attend schools near the heaviest agricultural pesticide use. This is a civil rights violation that DPR must rectify by decreasing the risk of pesticide exposure at schools across the state. The DPH report also found soil fumigants and other pesticides that are known to cause cancer, reproductive system effects, harm to the brain and nervous system and respiratory effects being used in large quantities within ¼ mile of many California schools.  The draft regulations allow for the continuation of these unjust conditions, as the threats from pesticide drift continue long after applications outside the 6 a.m. to 6 p.m. buffer zone period for most applications and 36 hour period for fumigations, and from applications beyond the insufficient ¼-mile buffer zone distance.

DPR should require one-mile protection zones (buffer zones) for pesticides of public health concern between fields where these pesticides are used and schools, childcare centers, school bus stops, and known school routes. Pesticides of public health concern include pesticides that show evidence of causing cancer, reproductive damage, harm to the brain and nervous system, and asthma and other respiratory problems. Hundreds of thousands, if not millions, of pounds of these hazardous pesticides are currently used annually near schools and daycares in agricultural counties throughout California. Protection zones of ¼ mile are simply not adequate for health protection. The first comprehensive report of drift-related pesticide poisoning conducted by state and federal health departments, found that in eleven states (including California) 15% of the people impacted in pesticide drift incidents were over 1 mile from the pesticide application, so 85% would have been protected by a 1-mile buffer zone.  Seventy-six percent of the cases occurred at distances over ¼ mile from the application site, so ¼-mile buffer zones would not help in most cases.   DPR’s own air-monitoring network has shown ¼-mile buffer zones to be inadequate.  For example, the air monitor at Shafter High School in Kern County has registered over the last four years average concentrations of the toxic fumigant Telone at 175% of DPR’s previous lifetime cancer risk level of concern, which agency risk assessment experts continue to support. This despite ¼-mile buffer zones for schools in Kern County and zero Telone applications within ¼-mile of the school.  UC Berkeley and UC Davis studies have linked prenatal brain-harming exposure to organophosphates to pesticide applications up to a mile away.

Second, no-spray protection zones around schools and daycares should be enforced at all times for fumigations, ground air blast, as well as for aircraft applications, because students, teachers and community members are often on school grounds for scheduled events and unscheduled activities when school is not formally in session. Furthermore, pesticides can evaporate off the crop plants for days and even weeks after they are applied, and pesticide contaminated dust can be blown onto school grounds and tracked into classrooms.  Eight of the ten pesticides most heavily used within a ¼-mile of schools persist in the environment for more than a week.

Third, counties need to retain full authority to keep and adopt stricter requirements based on local conditions.  The draft policy requirement that schools, grower, and County Ag Commissioner all need to agree on stricter requirements around specific schools hampers county officials ability to protect children.  Some counties currently enforce school buffer zones during evening and weekend hours and have adopted buffer zones well beyond ¼ mile for certain pesticide applications.  Growers should not be given veto power over such added protections.

Finally, while these are my/our most urgent and pressing concerns, your department needs to devote significant resources and attention, in collaboration with other agencies and universities, to reducing the use of, and phasing out, the use of soil fumigants and other high toxicity, drift-prone pesticides and helping farmers obtain resources to assist with this transition. Through innovation in agriculture, we can help California farmers adopt cutting-edge practices and tools that keep agriculture prosperous.

I/We hope with improvements to the draft regulations, you will continue your commitment to the state’s children and to the success of our farmers.