All of this is extremely sad and frightening for our community. Those who benefited from her friendship, fundraisers for their vaccine-damaged child, insightful information, saw her numerous billboards about vaccine risks, or community organizing are particularly stricken with grief. They will mourn the loss of her life for years to come.

But those who did not know her also grieve because Brandy was a mom who stood up for the safety of other children. She was one of us. One of the best of us. The loss of her life is a loss for all of us. Her courage and generosity were the strongest bonds of camaraderie there are for women. We raise our children in a community, and when our closest community does not believe us, shuns us, and even mocks us, we turn to social media to find support and create a new community. 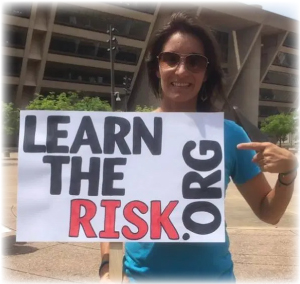 Brandy was a leader for many years in that online community, particularly in California during the opposition to SB 277 that removed a parent’s religious and personal beliefs regarding the vaccination of their children. She spoke publicly, mentioning Merck’s name and her background as a VIOXX sales rep, letting her audience know that she knew the tactics that were used and how vaccines were being pushed and sold, without safety testing, just like VIOXX was. She knew that the drive to make a profit, for Merck and Big Pharma, far surpassed their commitment to testing and safety. And she was vocal about it.

What we do know is that Brandy would not want anyone to stop speaking out about the risks of vaccines. We know that her love for the safety and freedom of every child overwhelmed her fear for her own safety. We know that our own commitment to creating health and freedom is unwavering. Our commitment does not change, but in fact, grows stronger.

No matter what happens, war, death, sickness, famine...historically women have thought about the future, planned for the safety of their tribes, and implemented the actions that needed to be taken. We communicated directly to those in power, stocked up on food, ensured the safety of shelter and food, cared for the sick and wounded, and if needed, migrated to places of safety. But we did not do this alone. We did it as a tribe, a community of women and tribal members who saw the needs, acknowledged them, and took on being the ones to remedy the situation. We have been, and continue to be, the ones in power in our own families.

And that is what we will continue to do. We see the need. We do not ignore the risks of vaccines and government/corporate medical control. We see the risk to our safety, our society, and our long-term potential as a free nation. We see the devastation of our children and their potential eroded away by vaccine damage. We see our elderly struck down by the side effects of vaccines. We SEE these harms, and we do not look away.

As we do not look away from Brandy’s death. We see the tragedy, we feel the loss. We also, as a tribe, will take on the actions to restock and rejuvenate... and carry on.

A GoFundMe has been set up in her honor for potential legal fees.
https://www.gofundme.com/f/brandy-vaughan-learntherisk/donate