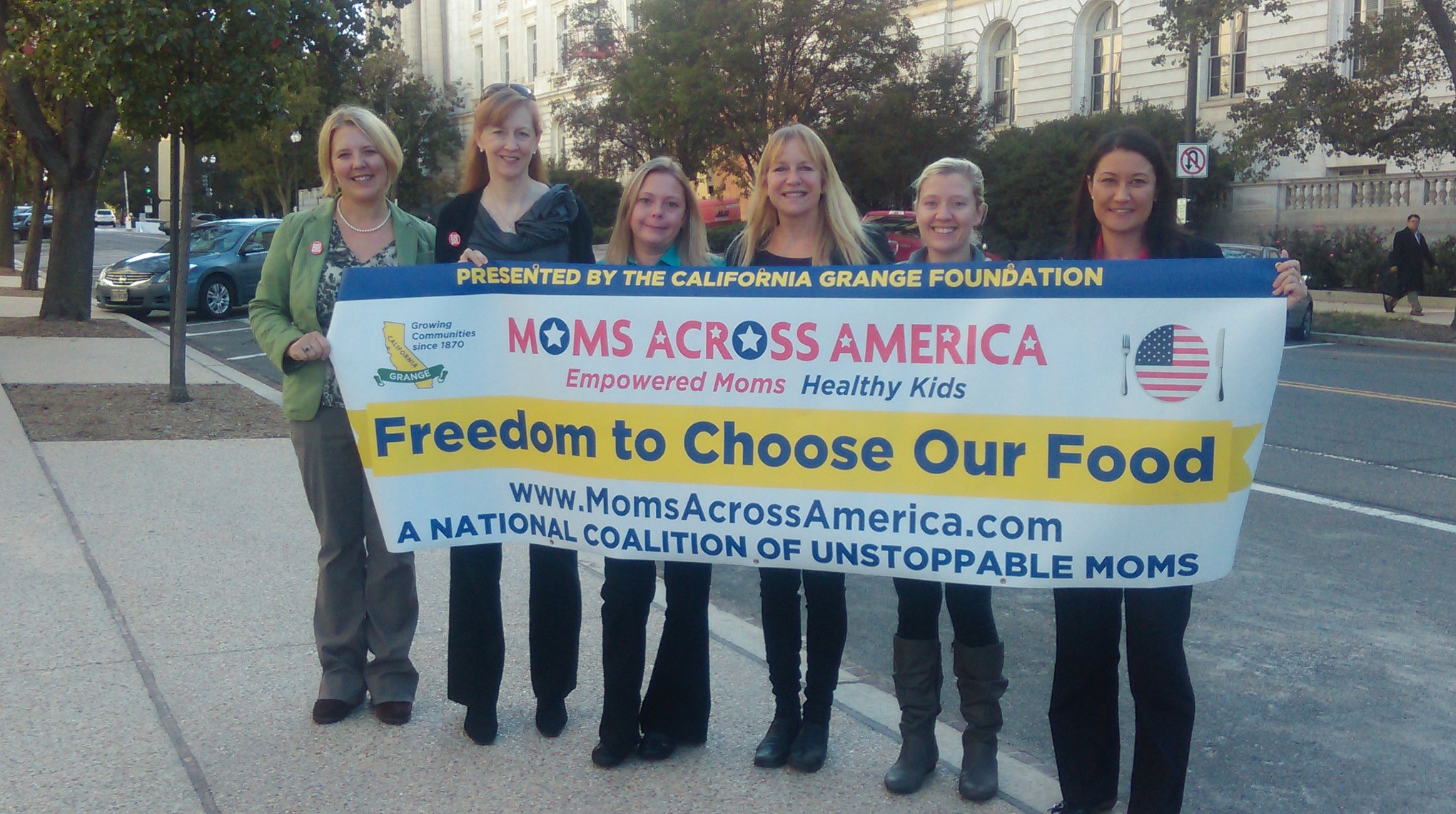 The EPA refused to meet with Zen Honeycutt and Moms Across America.

Zen made calls to action outside of the White House, to call the EPA 703-308-8187 to revoke the license of glyphosate (80% of GMOs are engineered to withstand glyphosate) and to call our Senators 202-224-3121 and demand GMO labeling. 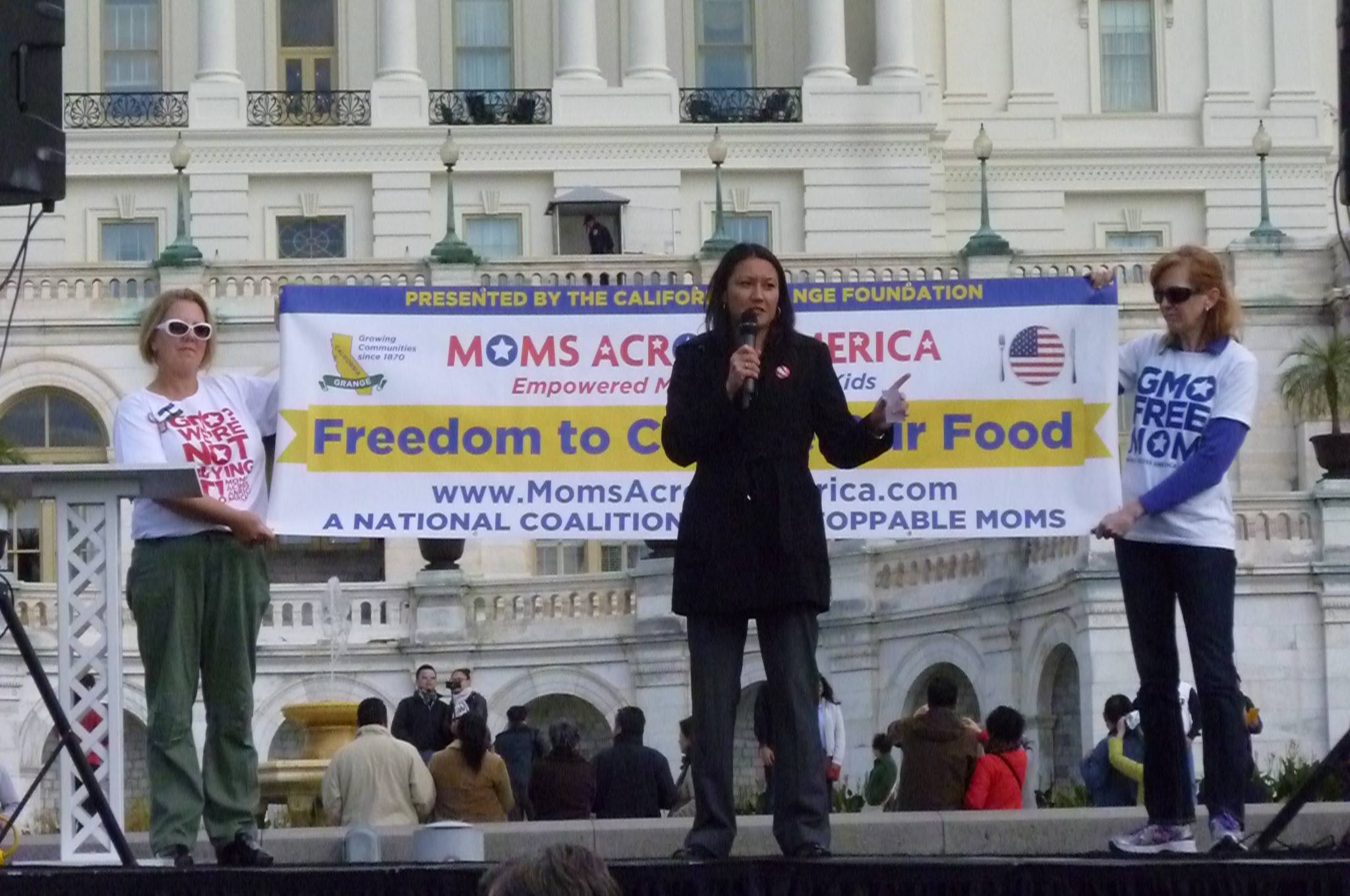 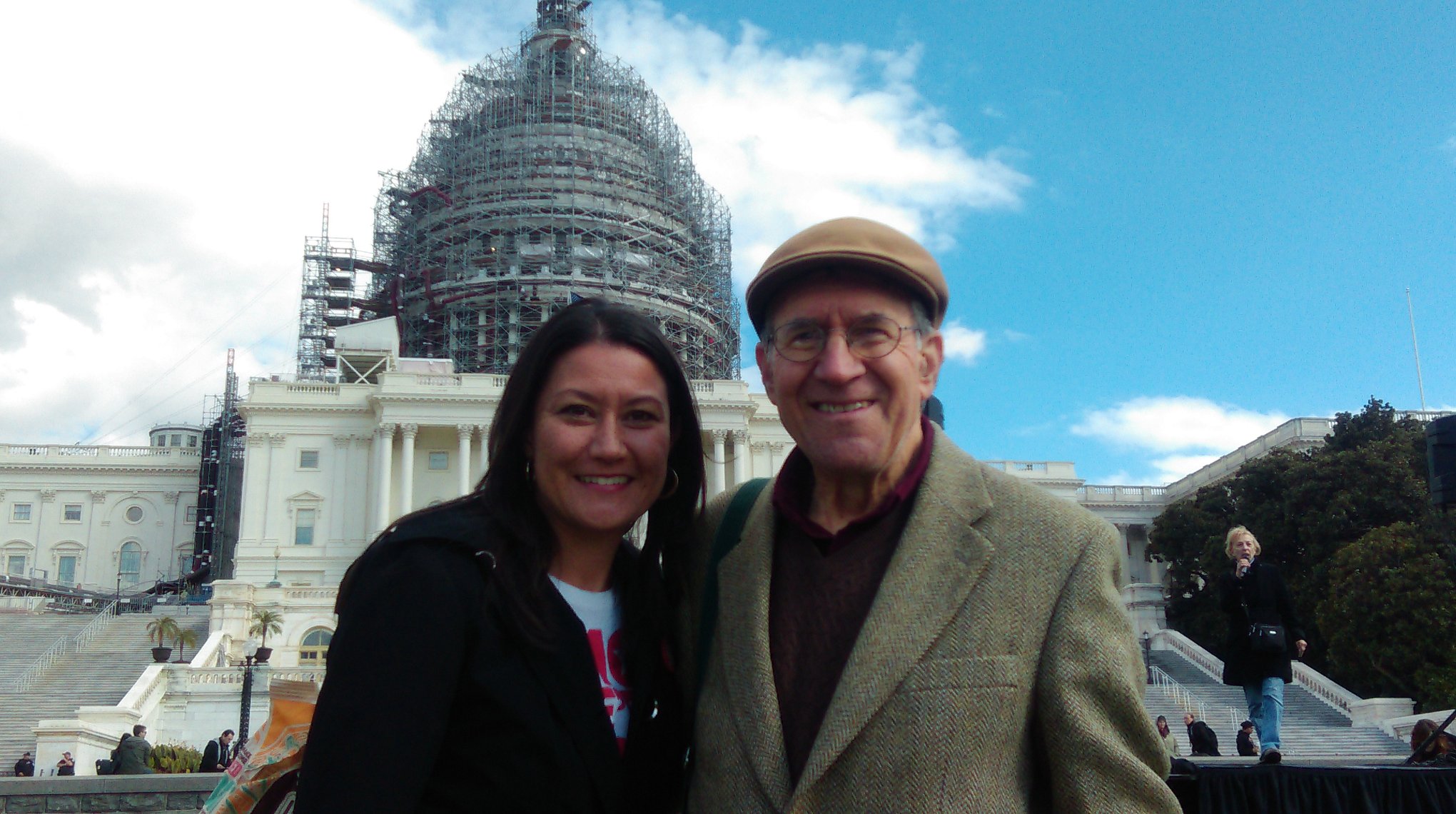 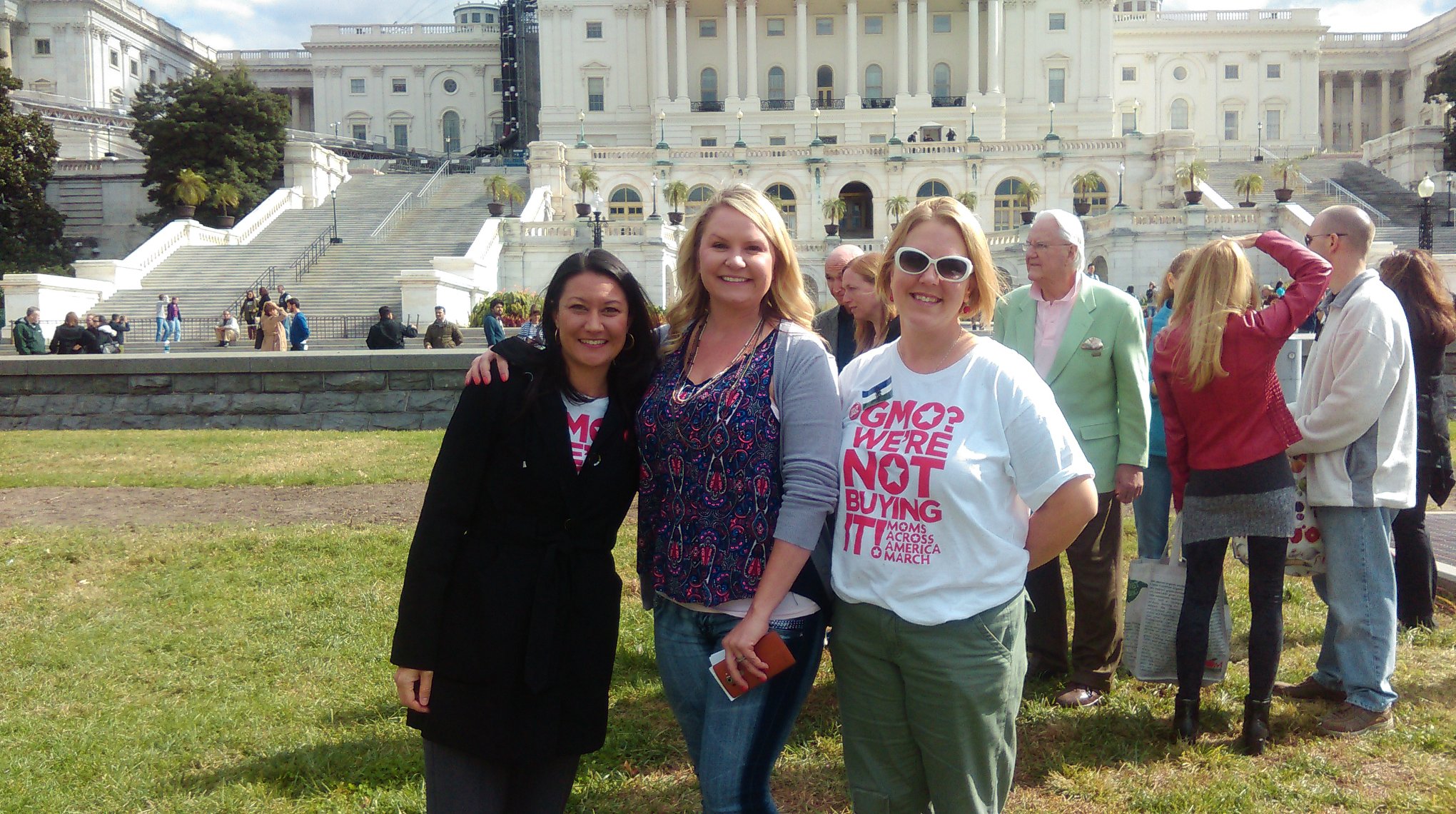 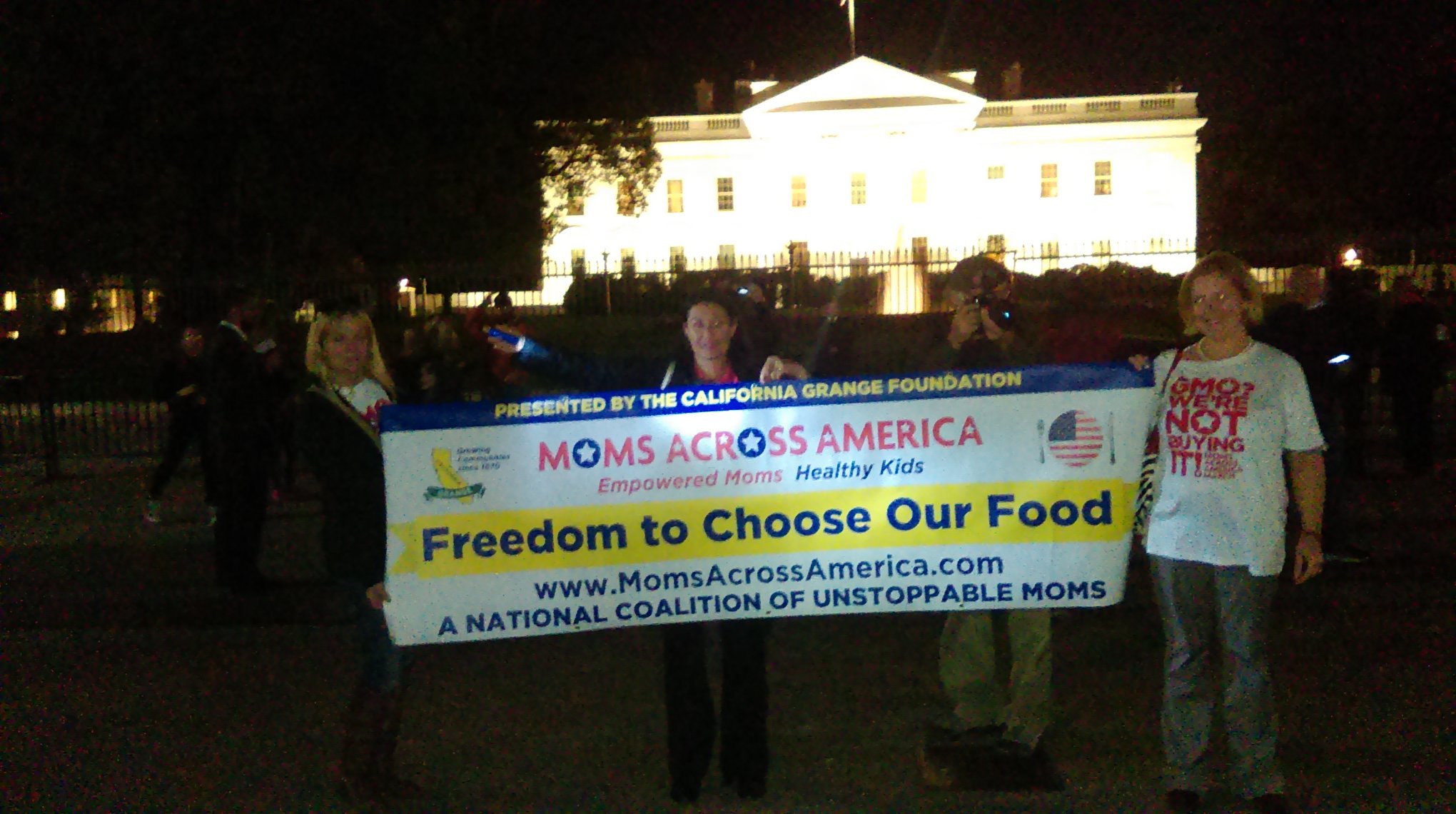 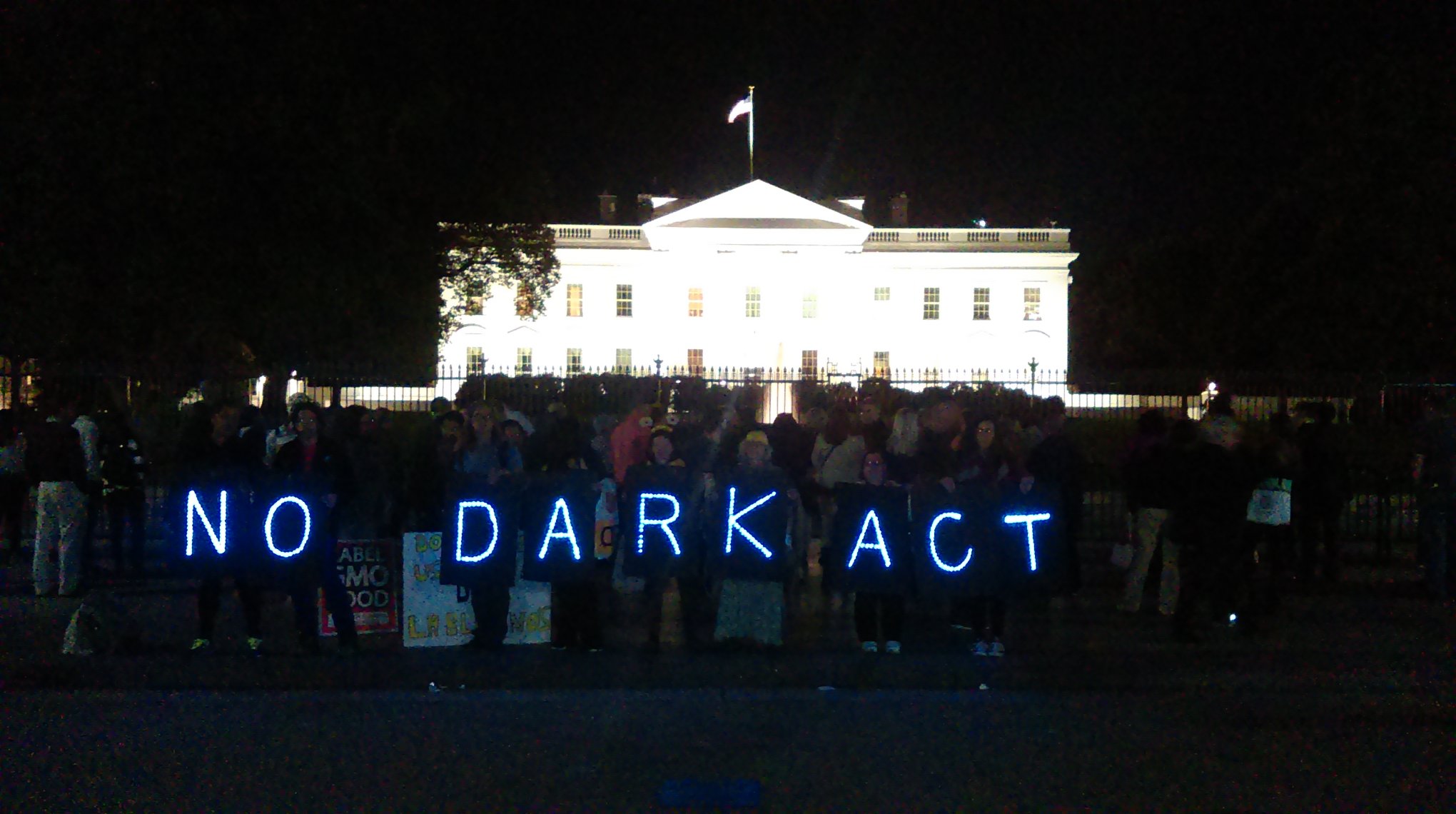 Outside of the White House 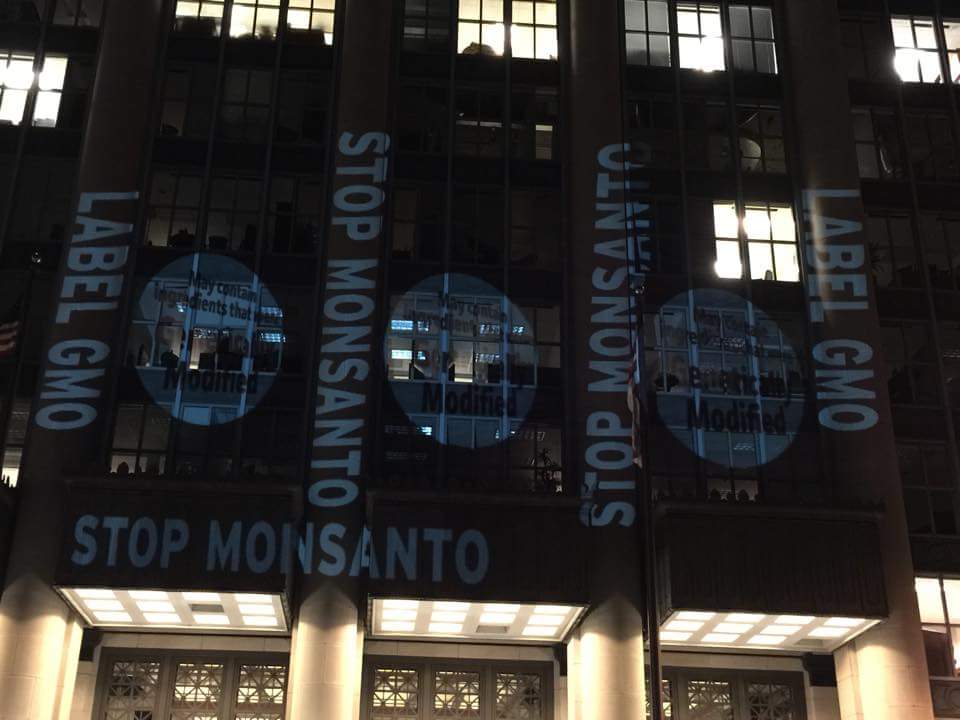 The Light Brigade light up the night with TRUTH.

Our voices were some of the last heard before the bio tech meeting which was supposed to be an unbiased discussion about labeling and the safety of GMOs.

It turned out to be a biased, Pro GMO discussion filled with lies. It turned out to be an opportunity for our Senators to intimidate and pressure the EPA, FDA and USDA representatives into speeding up the approval process for GMOs and related pesticides! It turned  out to be a farce of democracy. Utterly disgusting and outrageous.

Over and over again our Senators ignored and denied the scientific studies showing harm from GMos and glyphosate, the world's most widely used herbicide which is allowed on 160 of our foods at levels far above which has been shown to cause harm.

Our moms feel betrayed and dismayed. We are speaking up to demand integrity in our government and food supply.

See our email sent out Friday.

Please take part in creating a future of health, justice and freedom by calling your Senator and Senator Pat Roberts and leaving them a message today. Thank you.

Here is the link to watch the full hearing.  http://www.ag.senate.gov/hearings/agriculture-biotechnology-a-look-at-federal-regulation-and-stakeholder-perspectives 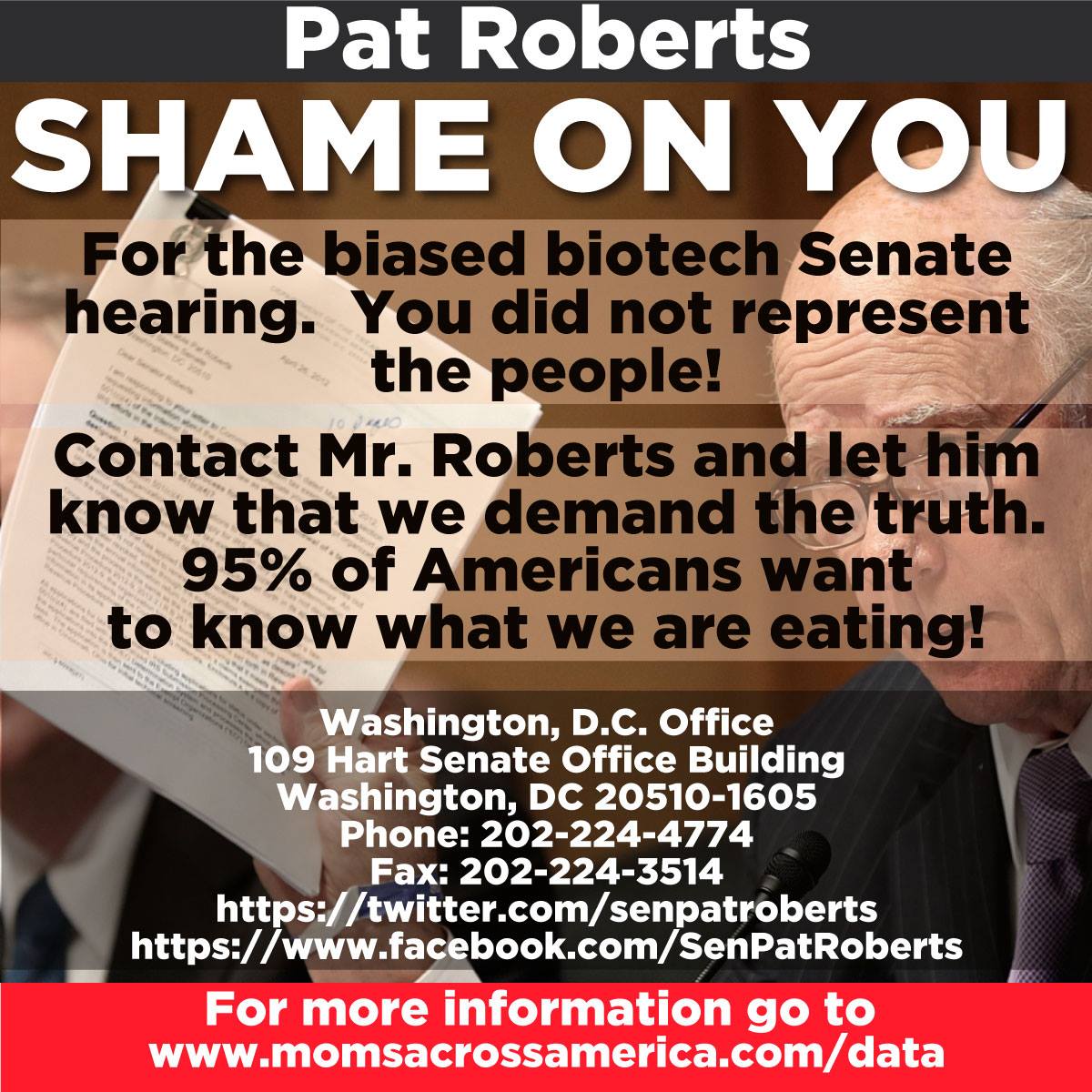 Nothing works without integrity. That means we MUST hold our elected officials to account for what we want. WE WANT TO KNOW WHAT IS IN OUR FOOD AND SENATOR ROBERTS IS IGNORING THIS!

Senator Roberts is the head of the Agriculture Committee and he led a truly one sided Pro-Biotech hearing this week which was shameful to the name of democracy. Moms Across America was appalled by the blatant lies, ignoring of the facts and disregard for sound science. Many Senators did not tell the truth and we want to contact them all. Please start with the head of the Ag Committee, Pat Roberts.

There are THOUSANDS of studies showing harm from GMOs and the pesticides the majority of GMOs are engineered to withstand, and yet our government officials and regulators continuously choose to ignore and disregard them.

We say that our Senators have a Legal and Moral OBLIGATION to not only consider the science at hand, but to apply the precautionary principal and mandate laws to protect us from any possible harm.

The concept of a chemical's "benefit outweighing the cost" to society Does NOT apply to our children.

There is NO collateral damage of our children that is acceptable to allow the continuation of the poisoning our children.

We have found glyphosate in our children, in our breast milk and in numerous foods our children eat. Just yesterday it was announced that glyphosate, sprayed on GMO cotton, was found in nearly every sample of GMO cotton gauze, bandage wraps (used in pediatric cancer wards), sanitary pads and tampons. We have also found glyphosate in the Pedisure Enternal brand which is given in feeding tube liquids to children with cancer 1100x higher than has been shown to destroy gut bacteria, which is where 70% of the immune system lies.

1 out of 2 of our children have a chronic illness in America. 1 our of 2 males and 1 out of 3 females are expected to get cancer.
Glyphosate has been deemed a probable carcinogen by the World Health organization!

It is time to say enough. We must first LABEL GMOs so we can choose to avoid them, and the public will know what they are eating.

If Roberts agrees that they are safe, like salt or pepper in foods, why not label them?

Then once manufacturers begin to transition away from GMOs and the number drops from being in 75% of the food to a lower amount, we can get to work on banning them.

Please call, (202) 224- 4774 today, Monday, as often as you can...text, tweet and email Roberts now and for the next few days to let his office voicemail fill up, his twitter feed to be inundated and his mail box to be full of mothers who will no longer stand for the lies.

If you live in Kansas we hope you will be extra active during the next election season to have officials who protect our right to know.