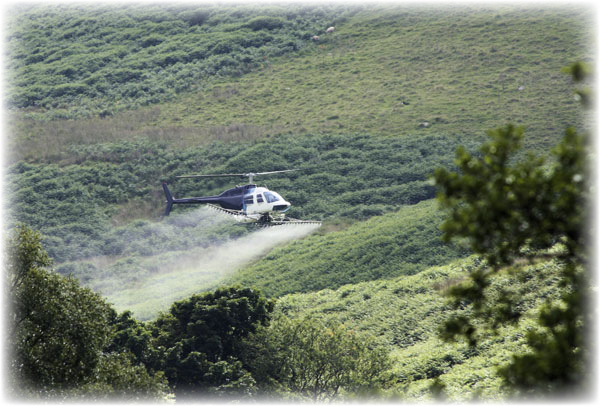 Did you know that most counties in America aerial spray toxic chemicals over cities and towns to kill mosquitos? The department is called Vector Control and each city has a Planning Commissioner or "trustee" on that board. Together, they decide when and what will be sprayed over your home, backyard gardens, playgrounds, streams, and schools while you sleep.

This week in my county a few of the Vector Control board members thought it might be a good idea to have only 3 people head the decision-making committee along with just one trustee from the affected areas. Their intention was to not have to have all 35 members convene for a vote on if spraying should be done. Because 48 hours of public notice must be given (they post it on their website), they often feel it is inconvenient to have to rush to convene and give us notice before they spray.

However, it also means if only one or two cities are gong to be sprayed then the three main committee members can outvote the two elected officials from the cities. Keep in mind that the spraying from a city can drift, and those neighboring cities can not vote. Many residents do not like this idea and spoke up about this voting process and the practice of spraying toxins.

This time, the board members listened and retained their vote. However, we are concerned about this tactic being utilized in other counties across the nation, and urge you to be aware of what is happening at your Vector control meetings. Obviously, it would be much easier for the chemical companies to persuade and convince 3 board members rather than 35.

Here is a link to our talking points that you can use after you find out when your next Vector Control meeting.

Please make sure you know what is happening at your Vector Control meetings. They are moving forward with the spraying of toxins with drones, and only hear the benefits of these sprays from the chemical companies, so someone, we hope it will be you, must speak up for safety and the truth.

Video of Zen Honeycutt speaking at the Vector Control meeting on the fraudulent EPA approval process for chemicals, proving that NO chemical pesticides should be sprayed at all. April 20, 2017

Video of Mavis, Zen's mother speaking on the impact of aerial spraying on bees and wildlife, especially fish and our children, from endocrine (hormone) disrupting chemicals.

UPDATE: In August of 2018, school pesticide applicator Dwayne "Lee" Johnson, who is dying of Non-Hodgkin's Lymphoma, was awarded 289.2 million dollars from Monsanto by a California Supreme Court jury. Monsanto was found guilty of acting with "malice and oppression," meaning they knew their glyphosate products could cause cancer and the company executives suppressed the information. As of September 2018, over 8,000 more Roundup users had filed lawsuits against Monsanto.

Organophosphate insecticides can impact learning, behavior, and other functions of the nervous system. For example, the most common chronic complaints following exposure to organophosphate insecticides include irritability and depression. Additionally, exposure to naled’s breakdown product dichlorvos may cause increased aggression. Piperonyl butoxide, which is frequently used in mosquito sprays, can cause behavioral changes.